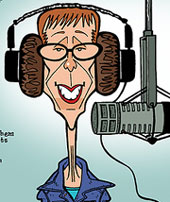 Terry Gross, the female Philadelphia-based host of the National Public Radio show Fresh Air, notoriously tangled with Bill O’Reilly in 2003 by asking O'Reilly to respond to Al  Franken's attacks on him (two weeks after a giggly interview with Franken himself). A July 1 interview with Washington Post political reporter Dan Balz on the (apparently hopeless) state of the Republican Party caused her to pick up the left-wing bloggers’ attack on Rush Limbaugh as someone who says "extreme wild things" and damages the GOP:

GROSS: You know, I always wonder what Republicans -- and I know you can't really generalize here because every Republican is different -- but what Republicans think of right wing talk radio and TV. Take Rush Limbaugh, for instance. He says some pretty extreme wild things. He's not running for office. He's not taking responsibility for running the country. He's, I mean, he's a talk show host and what he needs is an audience and ratings and saying extreme things is very good for getting audience and ratings.

Let me give you an example of one of the things that he said lately in relation to Mark Sanford's affair. He said, oh, this is almost like, I don't give a damn. And he's talking about what Sanford might be thinking, you know, this is almost like I don't give a damn. Country's going to hell in a hand basket. I just want out of here. He had just tried to fight the stimulus money coming to South Carolina. He didn't want any part of it. He lost the battle and said what the hell, the federal government is taking over. I want to enjoy life. So, he's basically blaming the federal government and President Obama for an affair that started before Obama was even president. I mean, that's just a small example of...

GROSS: ...what he said, but knowing that it's a talk show host's job to get ratings and not win elections, do you think the Republican Party -- that a lot of people in the Republic Party see Rush Limbaugh and other right wing talk show hosts who say extreme things as being helpful to them or harmful to them?

BALZ: Well, the role of radio talk show host, whether it's Rush Limbaugh or Sean Hannity, any number them, has been an essential part of how the Republicans have expanded their voice, their message and their appeal and energized at least a part of the population. I think most Republican office holders see them as they are, which is that they speak to a part of the base. They do it sometimes in ways that are outrageous that elected officials can't get away with. But again, they're not prepared to take them on, they've got to work around them.

Most of the people who want to be leaders of the Republican Party don't want to get into an argument with somebody who has an audience as big as Rush Limbaugh's and we've seen numerous examples of that. On the other hand, most smart Republicans don't think you can get elected president of the United States by speaking the way Rush Limbaugh does. But Rush, you know, the Rush Limbaugh, you know, gives demoralized Republicans, you know, some energy.

Balz didn't give Gross the answer she was looking for: hot conservative talk radio harms the GOP. Limbaugh did stretch on this topic – most Republicans don’t think you can lay the blame for Sanford’s adultery on being politically demoralized in the Age of Obama. But hosts on NPR somehow think that they can lob bombs at conservative talk radio and still be considered the soft-spoken "mainstream." It turns out this isn’t the only time in recent weeks Gross has raised Limbaugh as extreme. On June 18, she welcomed hard-left "hate group" researcher Chip Berlet to assess Rush:

GROSS: Now, Rush Limbaugh blamed the murder of Stephen Johns, the Holocaust Museum guard, he blamed that murder on the left.

GROSS: What logic is he using there?

BERLET: He's using a logic that developed in the 1920s, 1930s, when early analysts looked at Hitler's Nazi movement, which was the National Socialist German Workers' Party, and they recognized, actually true, that both Italian fascism and German Nazism came out of a group of socialist ideas who wedded it to nationalism.

What they neglected to then analyze was that once it formed into a major mass movement, it deleted all of the socialist aspects except for what the right wing would call collectivism, the idea that the state was imposing collective decisions.

That later became known as totalitarianism. Hannah Arendt wrote brilliantly about how it could be seen in both Hitler and Stalin, and what's happened is that these right-wing pundits and a whole lot of right-wing libertarians argue that Hitler, therefore, was a leftist because he was a collectivist and he came out of this socialist grouping.

Now, most major scholars of fascism today look at it and say, okay, there were socialist roots, but it turned into something else. And that when it gained state power or sought state power, it basically worked with the political right.

So you know, what we have here is an attempt to take a very marginal political viewpoint about fascism being a left-wing phenomena, and since Von Brunn was a national socialist, he was a neo-Nazi, therefore it's a leftist outlook. But it simply reduces 50, 60, 70 years of social science and brushes it aside and imposes this very narrow view from the '30s and '40s.

GROSS: Does this explain, in part, why people on the far right have been calling President Obama a fascist and a socialist and almost using the words interchangeably?

BERLET: Exactly. And in fact it goes back, really, in terms of a public accusation, to the administration of Franklin Delano Roosevelt because, of course, he was, in building a larger government role in American society, which was seen and identified at the time as collectivist - and you had really the earliest coalition of right-wing economic libertarians, like von Mises and others, with a Christian-right movement, which felt that FDR was imposing a kind of collectivism and socialism that was identical to fascism in Italy and Germany, which would strip away from America its manly ability to stand up and be God's country.

DAVIES: So the high right, are those in the kind of intellectual think tanks, something like with the Heritage Foundation and the American Enterprise Institute, and the low right is who, Rush Limbaugh?

KIRKPATRICK: Rush Limbaugh. Yeah. There were -- you know, an easy way to draw the line is Sarah Palin. The low right loves her, and the high right is embarrassed by her.

It’s sad that Rush Limbaugh’s tax dollars are going to NPR so he can be attacked from that subsidized liberal sandbox.