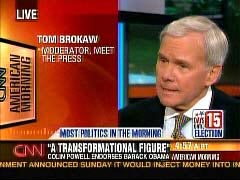 Tom Brokaw appeared on NBC’s Today and CNN’s American Morning on Monday to promote the pro-Obama effect of Colin Powell’s endorsement on Meet the Press. On both networks, Brokaw insisted "Colin Powell is one of the most admired and respected men, not just in this country, but around the world. And he has this gold plated military and national security resume." But he was more effusive on CNN, declaring that President Obama would be proof that America's made "giant steps" since Martin Luther King, but John McCain might still be an obstacle to historic transformation with his "guerrilla warfare" on the campaign trail. Brokaw’s praise unfurled as CNN anchor Kiran Chetry described Obama as the "culmination" of King's dream:

"Everybody thought that we needed to make the giant steps that Dr. King led the country through. He'll truly be a historic figure forevermore in America and for the world, for that matter. But the idea that an African-American man would be the head of the Democratic ticket and be in this kind of position with just three Tuesdays to go in effect, before we have election day, is pretty astonishing. And we have to say, we don't know whether he's going to make it or not because John McCain's a warrior and he believes [in] guerrilla warfare out there on the campaign trail."

Neither CNN nor NBC pressed Brokaw on whether Meet the Press was being used by Powell and the Obama campaign as a launching pad for a mid-October surprise. Brokaw seemed very pleased that this event would help Obama, and no one inside the media questioned whether Brokaw looked partisan by aiding this gambit. Chetry did bring up Rush Limbaugh’s dismissal of the endorsement, and Brokaw (who’s expressed his loathing for Limbaugh and his dogma on several occasions) insisted Rush was ignoring Powell’s harsh words for how conservatives are shrinking the GOP.

From the CNN transcript, discussing Brokaw’s book Boom! about the Sixties generation:

CHETRY: Yes. It's very interesting. In fact, one of the things you talk about in your book of course, is the historic nature of the 1960s, especially launching the civil rights movement.

CHETRY: And so here we are right now, the election, almost the culmination of that movement, especially if Barack Obama wins the presidency.

BROKAW: It's nothing that anyone could have anticipated at that time. Everybody thought that we needed to make the giant steps that Dr. King led the country through. He'll truly be a historic figure forever more in America and for the world, for that matter. But the idea that an African-American man would be the head of the Democratic ticket and be in this kind of position with just three Tuesdays to go in effect, before we have election day, is pretty astonishing. And we have to say, we don't know whether he's going to make it or not because John McCain's a warrior and he believes guerrilla warfare out there on the campaign trail.

CHETRY: Right. Well, one of the things that certainly helped Barack Obama was the endorsement on your show this weekend, Meet the Press. How significant is this for the campaign? That Colin Powell is endorsing Barack Obama?

BROKAW: Well, I think it's symbolically very important because Colin Powell is one of the most admired and respected men, not just in this country, but around the world. And he has this gold plated military and national security resume. And when he puts his arm metaphorically around Barack Obama, and says he has the experience and judgment to be a transformational president, that's very helpful to Obama, who has been attacked by McCain as a man who doesn't have the experience and the judgment. If you had flipped it, if Powell had gone for McCain, that would have been a devastating blow for Barack Obama, obviously. Does it move a lot of voters? We'll see. I think some leaners probably will be more comfortable with Obama.

CHETRY: You talk about this briefly in your interview with Powell that some will say that an African-American is supporting Barack Obama simply because he's an African-American. Rush Limbaugh wrote in an e-mail to Politico, 'Secretary Powell said his endorsement is not about race. Okay, fine. I'm now researching his past endorsements to see if I can find all of the inexperienced, very liberal white candidates he has endorsed. I'll let you know what I come up with.' Did Secretary Powell make the case to you that it was not about race?

BROKAW: He said if it was about race I would have done this 10 months ago. He said, I really want to take the measure of these two people. And what Rush Limbaugh does not get into is Colin Powell's indictment of what the Republican Party, he says is doing to itself. Colin Powell showed up at the convention in 2007, and praised President Bush and Dick Cheney, saying that he thought that they would heal the racial divide in America. He thinks it contracted the Republican Party, rather than reached out to a lot of people. He has great, great admiration for John McCain, he just doesn't think he's run a very good campaign. He's very unhappy with the selection of Sarah Palin. Doesn't think she's ready to be president in these troubled times.

CHETRY: Just quickly before we go. Senator Barack Obama ran his campaign and won the primary on his opposition to the Iraq war. Secretary of State Colin Powell led the case and laid out the case to the United Nations and still doesn't say the Iraq war was a mistake. Does that hurt the credibility?

BROKAW: No, I don't think so. I think because the Iraq war has gone down a notch, I think that Colin Powell's endorsement transcends that in many ways. And in some ways it helps Barack Obama. They still have some difficulty on how quickly they ought to get the troops out of there and setting a timeline. That also helps Barack Obama, probably. But caveat, we still got three Tuesdays to go and if we proved in 1968, these elections can tighten up. Barack Obama said just yesterday, and I say this to Matt Lauer, that he expects this race to tighten a lot.

From the NBC transcript, complete with a screen graphic focusing on the "Impact" of the Powell endorsement (Hint: we at NBC think it should be huge):

LAUER: What surprised me was when Barack Obama said to me, he had no advance noting, notice. He learned of the endorsement the same way the rest of us did, by watching the program.

BROKAW: Oh I think he, if he didn't get a phone call from General Powell, I'm sure they were in touch with a lot of his friends. And there was so much anticipation in the, over the weekend. Actually General Powell, when we made the arrangements for him to appear, asked us not to begin publicizing it until Friday...

LAUER: Why so close to the vest?

BROKAW: Because he didn't want to get a lot of calls and have his life disrupted more than, than it already is. And he wanted to state his endorsement on his terms, and not have a lot of undue speculation out there.

LAUER: Can he have a huge impact if, as Senator Obama said, he's not gonna be out there on the campaign trail, even though Barack Obama would like him out there. But making this one television appearance, albeit across a wonderful moderator, is that gonna have the kind of impact that Senator Obama really desires?

BROKAW: Well I think there are two parts to this Matt. The overnight polling that we've been doing shows that helps on the margins. He does not move the needle a lot. But he's a very powerful, symbolic presence for Barack Obama. Here's a man who's one of the most admired and respected, and not just in this country, but in the world. He has a gold-plated military and national security resume. And he speaks to the areas that McCain has been attacking Obama on: experience, judgment, can he do the job? He says, "Yes he can."

LAUER: The John McCain campaign seems to be feeling that they're getting some traction in a couple of areas. One, when they talk about Senator Obama's tax plan, they say, "it's redistributing wealth, it's spreading the wealth." Also when they compare the tax program to almost a welfare system. Who exactly are they talking to here? Is it new voters or are they just ensuring the base turns out?

BROKAW: No I don't think it's new voters, I think that what we've always been talking about are those independent voters, now make up one-third of the country. A lot of them are male, working-class guys. Set aside "Joe the Plumber," because it turns out he's not exactly what everyone says that he was.

BROKAW: But there are a lot of workers out there who are in the $50 to $60,000 category or maybe even a little more in the small business category that are worried, especially in this economic climate about what's gonna happen to their tax bills now. And they're making up their minds in the last two weeks. This is a regular pattern we see every four years. We've all been talking about this for almost two years now. But a lot of people are beginning to read the platforms, look at the positions and trying to decide what they're gonna do when they go into that voting booth.

LAUER: -$150 million raised by Barack Obama in the month of September. More than a half billion dollars in this campaign so far. This is a long, long way away from public financing that was intended to keep big money -- and most of these donations are small donations coming from a lot people -- this, this now the end of public financing based on the success of Barack Obama?

BROKAW: I think it is because frankly the other part of it is that the Supreme Court will never say that this is within the tenets of, of free speech. That you can't have public finance and free speech at the same time. So I think it's a tough one. I do think we do have to do something about money. There was a California politician by the name of Jess Unruh who once described it as, "the mother's milk of politics." No one has more milk than Barack Obama right now. And that's a big advantage.

LAUER: What did you think of Governor Palin on "SNL?"

BROKAW: Oh I thought she, I thought it was the right thing for her to do and it was very helpful to "SNL." Does it get them to where they want to get to, 1600 Pennsylvania Avenue? I don't know. Maybe back to 30 Rock, though.

LAUER: It gets "SNL" to where they want to be. There's no question about it! Tom Brokaw. Tom, thanks very much.