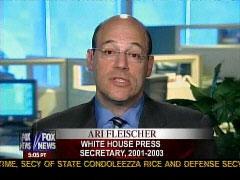 Perhaps as a method of self-defense, The Washington Post offered op-ed space in Sunday's paper to former Bush press secretary Ari Fleischer to object to his deputy Scott McClellan's charge in his book that the White House press corps were "complicit enablers" of the Bush agenda. As a "human pinata" in Bush's first two years, Fleischer wrote, that wasn't true:

At the risk of agreeing with one of my toughest protagonists in the briefing room -- NBC's David Gregory -- the press was tough, plenty tough. I have the scars -- and the transcripts -- to prove it.

Less than five hours after the Sept. 11 attacks, as we flew on Air Force One, the traveling White House press corps asked me if the "president should be satisfied with the performance of the intelligence community." "Has he asked to find out where the gaps were," reporters demanded. "Is he concerned about the fact that this attack of this severity happened with no warnings?"

Even before the fires were out at the World Trade Center, journalists pointed fingers and raised important questions. On a personal level, they were stunned, like everyone else. On a professional level, they dug in.

But many reporters weren't just being professionals. Some really disliked Bush. The day after 9/11 in the briefing room, I overheard reporters making dismissive noises about how Bush failed to come back to Washington promptly. They were not an uber-patriotic cartoon in their approach. They were still liberals smarting from the Florida recounts. Fleischer recalled:

Over the next few weeks -- during this period when critics charge that the press didn't do its job and was caught up in the post-Sept. 11 patriotic fervor -- I was challenged daily about intelligence mistakes, military plans and whether Bush was "going soft" on Russia's Vladimir Putin to gain his support. During the war in Afghanistan, I was grilled over the conduct of the war itself. I refused to answer questions about operational military details -- questions that no White House press secretary should ever answer. I often returned to my office beaten down from the clashes in the briefing room. But those clashes have always been part of the job.

In addition to being tough, sometimes reporters were just wrong. Fifty days after the 2001 attacks, three weeks into the war in Afghanistan, the New York Times ran a front-page story headlined "A Military Quagmire Remembered: Afghanistan as Vietnam."

In late 2001 came Enron's collapse, which the White House press corps tried to tie to the president. "When was the last time you talked to either Mr. Lay or any other Enron official, about the -- about anything?" President Bush was asked in the Oval Office. For weeks reporters piled on, assuming that because Ken Lay was a big contributor to Bush's gubernatorial campaign, Bush was partly responsible for Enron's collapse. Enron and Bush's presumed culpability dominated my briefings for weeks. So much for Sept. 11 causing the press to go easy.

Fleischer said the same pattern of tough questioning was there before the war in Iraq:

As for Iraq, as soon as Bush indicated that he was even considering using force against Saddam Hussein, the press challenged the White House.

"Is the president willing to prepare to sacrifice American and Iraqi innocent lives to take out Saddam Hussein," Helen Thomas asked in early September 2002, more than six months before the war began.

That month, one reporter (the transcript doesn't say who) asked at the daily briefing, "Do we have new evidence, even if you're not going to detail it to us now, that suggests the threat is getting worse?"

When Bush asked Congress that month to hold hearings and to vote on a possible authorization to use force in Iraq, the press pushed back -- hard. "Why is it after 10 or 11 years you can't wait three more months?" one reporter asked. Journalists thought Bush was politicizing the election.

In the lead-up to the war in Iraq, no matter what position the president took, the press took the opposite. Bush supported a so-called "tough resolution," sponsored by Sens. John Warner and Joe Lieberman, authorizing the use of force. Reporters practically came out of their chairs demanding to know why he failed to support an authorization sponsored by Sens. Joe Biden and Richard Lugar.

One reporter quoted foreign leaders as saying that Bush would "destroy the war on terrorism" if he went to war and of course almost all the press said Bush's actions were unilateral -- despite support from Britain, Italy, Spain, Denmark and practically every nation in Eastern Europe.

In early December 2002, after weapons inspectors came up empty-handed after visits to Iraqi sites that we thought contained weapons of mass destruction, I was asked, "Does it undermine the president's credibility at all [that] these sites were pointed to by him and Prime Minister Blair as very suspicious, and inspectors . . . didn't seem to find anything?" That doesn't sound like complicit enabling to me.

I hope I don't ruin the careers of tough reporters by agreeing that they were tough, but Charlie Gibson and David Gregory are right. The press did ask the hard questions, repeatedly. Based on the CIA's conclusions, many of the president's and my answers turned out to be wrong, but you can't blame the press for either the CIA's reporting or decisions reached by the president. It's important to recognize that regardless of the outcome of the war in Iraq -- an outcome still being written -- the press didn't cause it to happen or otherwise enable it.

Usually, retired press secretaries don't object to a little outbreak of internal press controversy. Sometimes we even enjoy it. But no amount of revisionism should be allowed to erase the historical record on this.

The hard left have an impossible standard for the press to meet: if the country goes to war, the press has failed. They are supposed to make the prospect of war so unpalatable and unpopular that the policy elite cries surrender to the press corps. Failing to do so does not make the press corps Bush enablers. Scott McClellan claiming they are makes him a Daily Kos enabler.