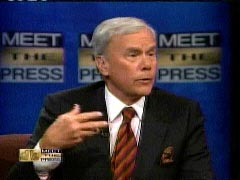 Former NBC anchor Tom Brokaw dismissed Rush Limbaugh as wrong-headed on Sunday’s Meet the Press. Not only did Brokaw pound the narrative that Reaganism is dead or dying within the Republican party, with a "nomadic herd" of voters "rejecting dogma," but he said Limbaugh trying to debate which candidate is truly conservative "is not going to help the Republican party." As if Tom Brokaw was really interested in that goal. He said the country is "hungry for solutions," as if "solutions" and "conservatism" were antonyms.

Brokaw tried to claim the "nomadic" search for the non-dogmatic is "going on in the Democratic Party as well as the Republican Party." Where on Earth would he get evidence for that? As Clinton, Obama, and Edwards all lurch left to secure the MoveOn/Daily Kos vote, they’re rejecting "dogma"? Here’s the exchange from a pundit’s-roundtable segment of the NBC Sunday chatfest:

TOM BROKAW: Well, I think, I think if there's a big thematic issue here in this election, it's the end of dogma, which has dominated so much of our politics in the last--well, since 1980, really. And people are rejecting dogma. As I see it, there's this kind of nomadic herd of voters out there wandering the landscape, looking for solutions, looking for a water hole, if you will, in which they can kind of resupply themselves and find solutions to the issues that really trouble them. It's going on in the Democratic Party as well as the Republican Party. I was listening to Rush Limbaugh for an hour yesterday, who is determined to not have this campaign, as he put it, redefine conservatism. And one of the ditto heads, one of his followers, called and...

BROKAW: ...said, "Well, help me out here. What do I think now about Pat Buchanan and Newt Gingrich?" And it's one of the few times I've ever heard Newt--ever heard Rush Limbaugh kind of temporarily at a loss for words. And he ended up saying that they're not true conservatives. And that debate is not going to help the Republican Party, if they if they get bogged down in that. The country is hungry for solutions...

MS. GOODWIN: Yeah. This is the mess the Democrats have got themselves into.

Peggy Noonan, a leading promoter of Reagan and his legacy, sat at the same table, but only very gently disagreed.

I would agree, except I would add this. The, the country is hungry for sense in its leaders that they have thought it through, that they have a philosophy, that they've considered the relationship of man and of the state, and considered the moment of history we're in, that philosophically, they are coherent. That matters, too...But I understand what you're saying about dogma, which is mere ideology, which is merely uninteresting. Philosophy's interesting, though, and counts, I think evermore this year.

UPDATE: Limbaugh played the Brokaw and Noonan clips on his show Monday, and replied:

I just love these liberals trying to tell us what we need to do to solve the country’s problems...How shallow does he come off here? I lsten to bites like this. I know he’s liberal. None of these guys want conservatives to triumph. But they make no effort to understand what drives conservatives or understand why these battles take place.

Limbaugh also noted that the American people don't just want "solutions" without an ideology. He made fun of Hillary's proclamation that she would ban mortgage foreclosures for 90 days. That's a "solution" to some consumers. But does it make any sense? Limbaugh suggested that the people should want solutions within a philosophical framework. 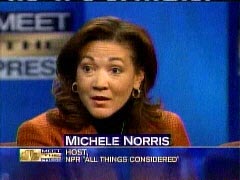 PS: When National Public Radio combats the notion that it's a wine-and-vegan-cheese liberal media outlet, it's probably not a good idea for NPR anchor Michele Norris to talk up Mike Huckabee with this patronizing tone:

He's a guy who has sort of--you know, people called him, frankly, a country bumpkin. Mike Huckabee. Well, think about America. For most people in America, a Friday night, a sort of fancy Friday night, is going to a place called Applebee's.

"A place called Applebee's," as if Norris has only heard this from certain political strategists, not that she'd get caught dead in one. She should have added that some Huckabee voters set foot "in a place called K-Mart."