Last week, liberal news outlet Salon did their best to convince themselves that Pope Francis never even wanted to meet with Kentucky clerk and conscientious objector Kim Davis. And they did so quite colorfully, claiming that the pontifix was “Ratf***ed” into a meeting with the Rowen County, Kentucky elected official. 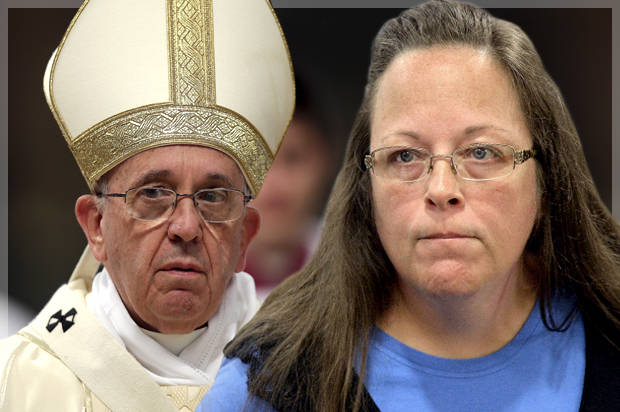 Salon assistant editor Scott Eric Kaufman came to this conclusion by quoting fellow liberal Charles Peirce, a contributer for Esquire. Peirce believes that Davis only managed to meet Pope Francis because of an internal Catholic conspiracy:

Finally, let us stipulate that, for over 2000 years, the Vatican has been a hotbed of intrigue, betrayal, and sanctified ratf***ing on a very high scale. (It also has been a hotbed of, well, hot beds, but that's neither here nor there at the moment.) So, if you're one of these people, and you're looking to ratf*** the pope's visit to the United States, and to his agenda in general, you'd be looking to put him in a box.

Kaufman echoed these sentiments with this subtitle to his so called “report.”

Esquire's Charles Pierce speculated that Pope Francis had been railroaded by Evangelicals. Turns out he was right.

However, Salon didn’t stop with this elaborate spin. 20 minutes after posting the original “report,” They also “reported” that the Pope openly and happily met with a gay couple the day before the papal scam of the century took place.

Yayo Grassi and his partner, Iwan — old friends of the pope from Argentina — visited the pontiff and were greeted with warm hugs. In an interview with CNN, Grassi said that “three weeks before the trip, he called me on the phone and said he would love to give me a hug.”

Unlike the publicity stunt manufactured by Kim Davis, her lawyers, and elements within the church hostile to Francis’ agenda, this meeting was both deliberate and purposive.

Salon then went on to promote the standard liberal slant, painting the Pontifix as a champion of the gay rights agenda.

The pope is aware of Grassi’s sexuality, but “he has never been judgmental. He has never said anything negative.”

Were Pope Francis’s comments defending Kim Davis’s right to contentious objection an elaborate hoax as well? What about his fervent stance on protecting the unborn? For Salon, it seems that no spin goes too far.