Lawrence O’Donnell and MSNBC proved again Tuesday night that Republican presidential candidates will never receive a break on their network, even when they appear to be in agreement an issue. On his show The Last Word, the liberal host held a segment on Ben Carson’s USA Today op-ed in which the Republican presidential candidate acknowledged the issue of police brutality, and offered a new way of addressing the problem. Carson called upon the Republican party to “invite us in and listen to us.” He also had some suggestions for Democrats as well:

“We don't want to be fed, clothed and housed. We want honor and dignity. We don't want a plan to give us public housing in nice neighborhoods. We want an end for excuses for schools that leave us without the means to buy our own houses where we choose to live.”

To dismiss these ideas and bash the GOP in general, O’Donnell brought on Black Lives Matter activists Brittaney Packnett and Deray McKesson. While both acknowledged that they were glad to see a Republican candidate discuss this issue, Packnett immediately dismissed Carson for refusing to acknowledge that the US harbors “systemic racism and oppression.” 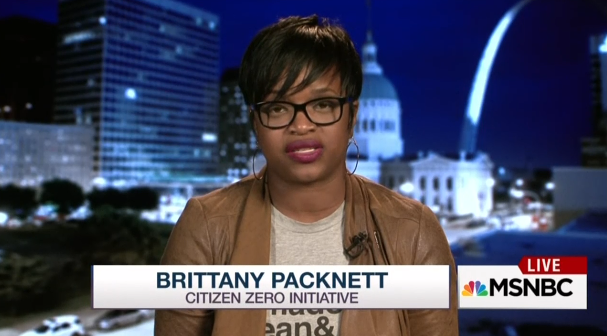 the tracker is showing most candidates on that side are not discussing it at all and it is certainly a central issue. I think what was frustrating thought was that he failed to acknowledge the existence of systemic racism and oppression. The movement has consistently acknowledged that police violence is a branch of a tree rooted in exactly that-- in systemic racism and oppression. So to not address the root cause of why we are here it makes it difficult for his instructions to be taken thoroughly. I also am frustrated his language seemed to suggest that addressing police violence is not both urgent, and not something we can do as we address other things."

McKesson added, falsely, that Dr. Carson “Refuses to acknowledge race,” despite the fact that they were discussing his, you know, acknowledgement of racial issues. He also suggested the retired neurosurgeon believes “because he was successful, racism essentially doesn't exist.”

"You know, the Republican party, most of the candidates, including Carson, who refuses to acknowledge race, they want race to only be these issues of immigration and not actually talk about any other issues of racial justice that impact people. What we saw with Carson, is Carson did this interesting thing where he says because he was successful, racism essentially doesn't exist. What we know to be know to be true is that exceptionalism is not justice. Like Brittany said, he wholly ignores any systemic racism."

O’Donnell then went on to discuss a “10 point plan” that Black Lives Matter activists developed which includes removing most of a police officer’s ability to protect themselves in an attack, and subjects them to intense and illegal interrogation methods. He gushed over the plan as “The most complete, comprehensive I have seen.”

I have been studying this problem for decades now and I have seen lists like this come out in different communities after big incidents like has happened in Ferguson and there are four or five of these things on here but never seen this full ten. This is the most complete, comprehensive I have seen.

In this segment, MSNBC and Black Lives Matter show us again that they care more about using an issue to promote a partisan agenda than they do about solving a particular problem, even if that includes hurling false accusations at a candidate who wants to fix the issue they claim to be concerned about.