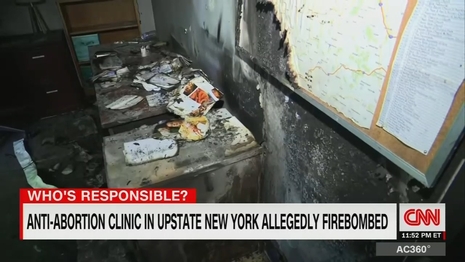 Over the last two months a wave of radical, pro-abortion terror has swept across the country, firebombings of pro-life organizations, intimidation of individuals, and destruction of property.  But you wouldn’t know the perpetrator if you watched ABC, CBS, NBC and MSNBC. They refuse to say the name of the group responsible: Jane’s Revenge. Shockingly, the liberal CNN is the only network to name names and specifically identify them.

This terrorist organization has claimed credit for firebombings, arson and other acts of violence. With little subtlety, they are now threatening physical harm or death. In addition to not saying the group’s name, the little coverage of the actual attacks resulted in a matter-of-fact, no-outrage tone.

Jane’s Revenge has taken credit for scores of attacks against pro-lifers and on June 15, released this terrifying threat to pro-life Americans:

We offered an honourable way out. You could have walked away. Now the leash is off. And we will make it as hard as possible for your campaign of oppression to continue. We have demonstrated in the past month how easy and fun it is to attack. We are versatile, we are mercurial, and we answer to no one but ourselves. We promised to take increasingly drastic measures against oppressive infrastructures.

Rest assured that we will, and those measures may not come in the form of something so easily cleaned up as fire and graffiti.... it’s open season, and we know where your operations are. The infrastructure of the enslavers will not survive.... Through attacking, we find joy, courage, and strip the veneer of impenetrability held by these violent institutions.

Here’s a video detailing just some of the violence against pro-life organizations in recent weeks: 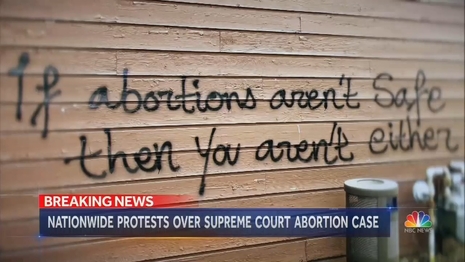 On the May 8 NBC Nightly News, Ali Vitali at least managed to explain the threat left by the terrorists: “In Madison, Wisconsin, police say a Molotov cocktail thrown into the headquarters of an anti-abortion group, vandalized with a warning spray painted on a wall: ‘If abortions aren’t safe, then you aren't either.’”

Similarly, MSNBC covered the May 8 Wisconsin bombing for 153 seconds on May 9. But no mention of Jane’s Revenge.

Shockingly, it was liberal CNN that actually managed to at least say the words “Jane’s Revenge.” On May 9 and 10 and June 10, the network covered attacks. This totaled 327 seconds on the terror attacks. On the June 10 Anderson Cooper 360, the name was actually uttered aloud. Reporter Randi Kaye talked to Jim Hardin, the CEO of CompassCare.

Touring the burned remains of his organization, Hardin asserted, “You’ll see a sign over here with graffiti saying ‘Jane was here.’ That represents Jane’s Revenge. It’s an abortion terrorist group.” Of course, CNN is still CNN and Kaye acted oblivious, like in this exchange:

RANDI KAYE: What makes you think it was this group Jane’s Revenge that attacked your facility?

JIM HARDIN: They left their signature calling card, number one, with their spray painted message on the side of our buildings saying, “Jane was here.”

She even questioned the reality of the organization:

Who exactly is Jane’s Revenge is still unclear. The group, if they’re a group, at all remains anonymous. They’ve allegedly taken responsibility for a similar attack last month on a conservative organization that lobbies against abortion in Madison, Wisconsin.

Still, credit to CNN for actually giving a name to this terrorist organization. It’s more than ABC, CBS and MSNBC have done. NewsBusters reached out to the other four networks to request an answer for their refusal to directly mention Jane’s Revenge. We’ve yet to hear back.

Any day now, the United States Supreme Court will release a potentially historic decision that could overturn Roe vs. Wade. The terrorists at Jane’s Revenge must be taken at their word. They plan more attacks and to escalate violence.

Journalists: Do your job. Cover this threat now before someone gets killed.