It was ten years ago, Memorial Day weekend 2012, that MSNBC's Chris Hayes admitted he was “uncomfortable” calling fallen military members “heroes.” Appearing on his weekend show Up With Chris Hayes, the host attempted to explain why the word hero bothers him so.

On Sunday, in discussing the uses of the word "hero" to describe those members of the armed forces who have given their lives, I don't think I lived up to the standards of rigor, respect and empathy for those affected by the issues we discuss that I've set for myself. I am deeply sorry for that.

As many have rightly pointed out, it's very easy for me, a TV host, to opine about the people who fight our wars, having never dodged a bullet or guarded a post or walked a mile in their boots. Of course, that is true of the overwhelming majority of our nation's citizens as a whole. One of the points made during Sunday's show was just how removed most Americans are from the wars we fight, how small a percentage of our population is asked to shoulder the entire burden and how easy it becomes to never read the names of those who are wounded and fight and die, to not ask questions about the direction of our strategy in Afghanistan, and to assuage our own collective guilt about this disconnect with a pro-forma ritual that we observe briefly before returning to our barbecues.

But in seeking to discuss the civilian-military divide and the social distance between those who fight and those who don't, I ended up reinforcing it, conforming to a stereotype of a removed pundit whose views are not anchored in the very real and very wrenching experience of this long decade of war. And for that I am truly sorry.

For the May 10, 2020 issue of the New Yorker, Hayes was asked to revisit the controversy. With regard to the “hero thing,” the MSNBC host seemed to realize the need to be “careful and empathetic” to other people’s grief.

…When that happened, the thing that really hit home to me was just about being careful and empathetic about people’s experience of loss and their grief, and how important that is as a public figure and public platform. No matter what point you’re making, in whichever political valence, people’s losses are real. Their grief is real. Their mourning is real. You have to take that seriously and be respectful of it.

It doesn’t mean that that’s the end of the conversation from the policy perspective. It doesn’t mean you can’t oppose the war, you can’t oppose lockdown—whatever your policy preference is. But it does mean we all have a duty, as human beings, as members of civil society in a collective enterprise of democracy, and also anyone with a platform, to just be, like, empathetic and careful with the hearts of others.

For most, this conclusion already would have been obvious, but at least it’s progress.

Here is a complete transcript of Hayes’s initial comments, made on May 27, 2012. 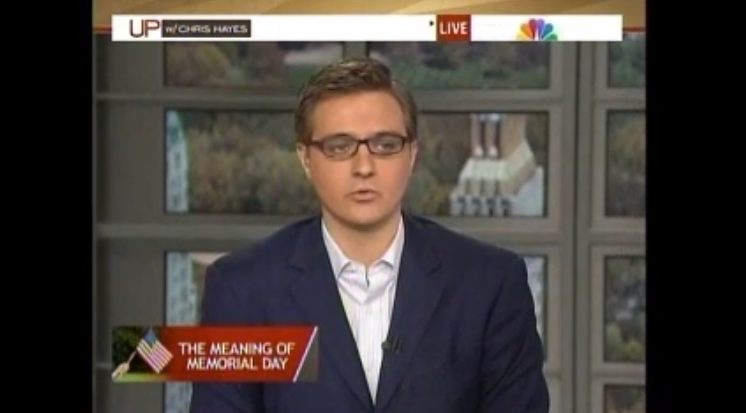 CHRIS HAYES: Thinking today and observing Memorial Day, that'll be happening tomorrow. Just talked with Lt. Col. Steve Burke, who was a casualty officer with the Marines and had to tell people [inaudible].  Um, I, I, ah, [Steve] Beck, sorry, um, I think it's interesting because I think it is very difficult to talk about the war dead and the fallen without invoking valor, without invoking the words "heroes." Um, and, ah, ah, why do I feel so comfortable [sic] about the word "hero"?  I feel comfortable, ah, uncomfortable, about the word because it seems to me that it is so rhetorically proximate to justifications for more war. Um, and, I don't want to obviously desecrate or disrespect memory of anyone that's fallen, and obviously there are individual circumstances in which there is genuine, tremendous heroism: hail of gunfire, rescuing fellow soldiers and things like that. But it seems to me that we marshal this word in a way that is problematic. But maybe I'm wrong about that.