Four days after the bombshell revelation from court filings that connected the 2016 Hillary Clinton campaign to spying on Donald Trump’s, ABC, as well as CBS and NBC are still silent. They have buried the explosive allegations entirely. However, in the category of stupid, vapid stories that the networks are covering instead, ABC’s Good Morning America wins by a mile.

To “honor” the brazenness, the hiding of real news, the level of corporate whoring that only GMA can achieve, we present:

The show with no journalistic principles did it twice on Wednesday as co-host Michael Strahan shilled for Marvel (which, like ABC, is owned by Disney), “Spider-Man: No Way Home swinging its way past Avatar this morning! The superhero movie is now the third highest grossing domestic release ever!” (GMA is the same ABC show that relentlessly promoted the Disney movie Mulan, but buried the news that Disney filmed near Chinese concentration camps.)

Co-host Lara Spencer could barely contain her excitement as she promoted “Bing Dwen Dwen,” a stuffed animal made for the 2022 Olympics: “There is another star at this winter Olympics! Yes, the athletes are amazing but there is a fan frenzy around this giant round panda!” 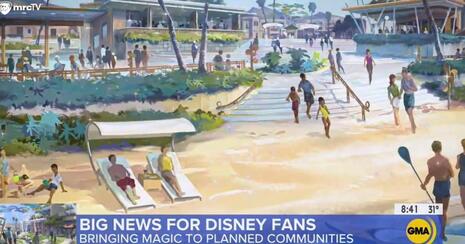 The whoring continued as Ginger Zee narrated a press release for Disney on a planned community that Disney super fans can soon live in: “Disney is announcing that it has a plan to bring Walt Disney creativity into planned communities called Story Living by Disney.... Disney is sprinkling pixie dust in places that you may not never have expected!”

Total time on the success of Spider-Man: 31 seconds.

Total time on a stuffed panda at the Olympics: 3 minutes and 18 seconds

Total time on “story living by Disney”: 1 minute and 20 seconds

The censoring of real news in favor of nonsense was sponsored by Planet Fitness, Comcast and Allstate. Click on the links to let them know what you think.