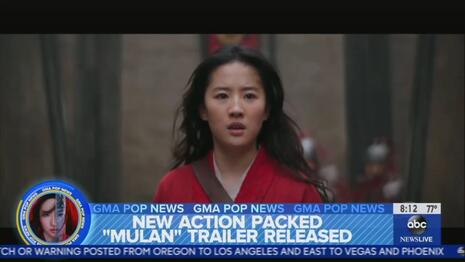 The China Olympics kicked off on Friday night under the shadow of the country’s brutal regime sentencing Uyghur minorities to prison terms featuring torture and sexual abuse.

Yet, as NewsBusters reported on Tuesday, the networks only allowed 13 minutes in one year. For NBC, the network televising the Olympics, there was only 742 seconds. (They've tried to make up for a year of non-coverage by doing a lot more in the last few days.)

But NBC isn’t the only morally compromised network. ABC allowed just 23 seconds from January 31, 2021 to January 31 2022. And the journalists at that network have repeatedly sold out to their corporate overlords, burying the news of a prison camp Mulan filmed nearby and it might harm the movie's release.

In September of 2020, ABC’s Good Morning America aggressively promoted the live action version of Mulan. The network repeatedly hyped its debut on Disney+. Yet, when ugly news broke that the movie filmed near brutal Chinese concentration camps, ABC censored the story.

Here’s what ABC hid. On the September 9, 2020 CBS This Morning, Elizabeth Palmer revealed, “Xinjiang is heavily policed with surveillance cameras everywhere. This is where the Chinese Communist Party runs so-called re-education camps where it's detained more than a million local people, including Muslim Uyghurs and forced them to relinquish their language and religion.”

Desperately pathetic shill Sam Champion on August 13 insisted that the film would bring “honor” to, among others, ABC employees: “Disney releasing the trailer ahead of the movie September 4th Disney+ premiere. Safe to say, I think Mulan will bring honor to us all when we finally get to see it and Disney is our parent company.”

ABC may not want to cover the oppression of the Uyghurs, but enjoy the trailer for Mulan.

But the abandonment of news is sadly nothing new for ABC. When Disney+ premiered in November of 2019, Good Morning America devoted almost 17 minutes to shilling for it.

Outlets like ABC and NBC simply can’t be trusted anymore. It’s not just liberal bias, they are compromised by their corporate overlords and turn a blind eye to horrors that conflict with their bosses.