ABC FINALLY Discovers the ‘Trump Investigation Bombshell’! No, Not Spying 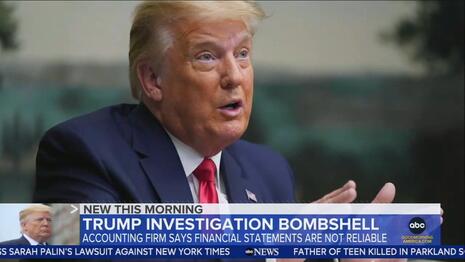 If you turned on ABC’s Good Morning America on Tuesday, you might have thought that the network has finally discovered the blockbuster accusation that the Hillary Clinton campaign spied on the Trump campaign in 2016, and then on the White House. After all, the ABC graphic alerted, “Trump Investigation Bombshell.” But you’d be wrong. The rest of the graphic is this: “Accounting Firm Says Financial Statements Are Not Reliable.”

ABC, as well as CBS and NBC on Tuesday continued the network silence that began over the weekend when outlets like The Washington Times and The Washington Examiner reported the spying case against Clinton being built by Special Counsel John Durham.

Instead of that bombshell, GMA co-host George Stephanopoulos covered something completely different: “Now to a major development in the investigation of President Trump's business for possible fraud. The Trump organization's longtime accounting firm cut ties with the company, declaring key financial documents are not reliable.”

GMA devoted 1 minute and 54 seconds to this story, which is 1 minute and 54 more than they’ve given to the new Durham claims. Over on NBC’s Today, Savannah Guthrie allowed 34 seconds on the accounting firm story.

She explained:  “Donald Trump's long time accounting firm is cutting ties with the Trump organization. Mazars USA is saying that the financial statements they prepared for almost a decade can no longer be reviewed as reliable.” CBS Mornings had nothing on the accounting firm or Durham.

While NBC can’t be bothered (so far) to cover the story on the air, the network did online:

The continued cover-up on ABC was sponsored by Hyundai. On CBS, it was Progressive insurance. On NBC, it was Sleep Number beds. Click on the links to let them know what you think.

JON KARL: Good morning, George. It's a move that may have big implications for multiple investigations into Trump's business practices. His longtime accounting firm says it can no longer stand behind financial statements it has prepared for the Trump organization over the past decade. Former President Donald Trump's accounting firm cut ties with its highest profile client as he faces civil and criminal investigations into his family business. In the past, Trump has described his accountants as the best around.

DONALD TRUMP: I spend millions of dollars a year for lawyers and for accountants to do my taxes.

KARL: In a letter filed in court by the New York Attorney General, Mazars USA said a decade of statements compiled with information provided by the Trump organization, quote, “should no longer be relied upon.” Trump used those to secure loans and to sell his business success as he ran for president.

TRUMP: I was a business guy. I was successful. I was very successful.

KARL: New York Attorney General Letitia James is trying to force Trump and his eldest children to testify under oath as part of her investigation into whether he illegally inflated the value of his assets and sought to avoid paying taxes. The Trump family dismisses the investigation has politically motivated.

ERIC TRUMP: New York prosecutors come after us every single day on these political witch-hunts trying to find anything they possibly can and that's all this is.

KARL: In a statement the Trump organization downplayed Mazars' decision. Meanwhile, a state judge will hear arguments later this week about whether Trump could be forced, or should be forced to testify on this matter. George?

SAVANNAH GUTHRIE: Donald Trump's long time accounting firm is cutting ties with the Trump organization. Mazars USA is saying that the financial statements they prepared for almost a decade can no longer be reviewed as reliable. Now that paperwork is at the center of investigations into whether the former president's company broke the law by inflating its assets. But the accounting firm says the documents as a whole don't show material discrepancies. A Trump spokesperson characterized it as good news for the company. Still, experts say the move could suggest significant issues with the Trump organization financial statements.