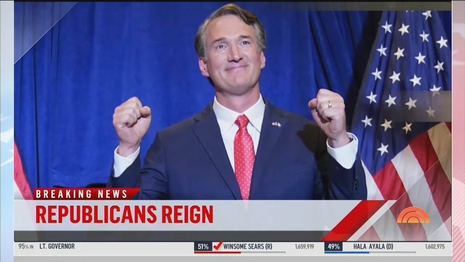 After the 2017 New Jersey and Virginia elections, where Democrats swept to victory, the networks the next day delighted in a “stinging rebuke” to then-President Trump that “lifted” the spirits of Democrats. Four years later on Wednesday, as Republicans won in deep-blue Virginia and hold a lead in very deep blue New Jersey, ABC, CBS and NBC again tried to focus the results back on Donald Trump.

On the Today show, NBC’s Garrett Haake focused: “But Youngkin successfully kept his distance from Mr. Trump during the race and did not campaign with him.” On CBS Mornings, Major Garrett lectured Republicans, “In a post-Trump or neo-post-Trump era, if you have a center-right agenda and President Trump is not part of the conversation, suburban voters are gettable for Republicans.”

Now, the networks allowed that Tuesday was terrible news for Biden. CBS’s Ed O’Keefe fretted, “Big warning signs for Democrats and a virtual rejection of the Biden agenda.” NBC’s Savannah Guthrie worried that the results are “major blow to Democrats and President Biden.” ABC’s Jon Karl told George Stephanopoulos, “George, this is a sonic boom of a wake-up call for Democrats.”

But on November 8, 2017, the networks were positively excited the day after big wins for Democrats in the Virginia and New Jersey governor’s race, enthusing over how this “stinging rebuke” would “lift a damaged party’s spirit.”

On that day's CBS This Morning, then-co-host Norah O’Donnell sounded less like a journalist and more like a therapist. She cheered, “One year after President Trump’s election, voters in Virginia and New Jersey go big for Democrats. Their candidates win easy victories and lift a damaged party's spirit.” CBS promoted the Democratic success for five minutes and 11 seconds. 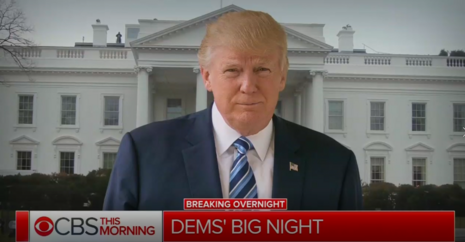 Ed O’Keefe saw the Virginia win for Democrats as a warning for the GOP: “Message is Republicans have to figure out whether they're going to fully embrace Trumpism or totally divorce themselves from it. Ed Gillespie, the Republican candidate in Virginia, was trying to do a little bit of both and it didn’t work for him.”

O’Keefe hailed the greatness that was the Democratic candidates: “For Democrats, the message is, that candidate recruitment, the enthusiasm they’re seeing among voters, it’s legit.” He added, “Democrats are getting elected up and down the ballot.”

For the November 8, 2017 GMA, co-host Robin Roberts was equally thrilled: “[President Trump] suffering a defeat back at home. Democrats sweeping key races. What it means for the Trump agenda.” She continued, “Democrats seeing a lot of success, you know, coming out on top in that closely watched race for Governor in Virginia.” 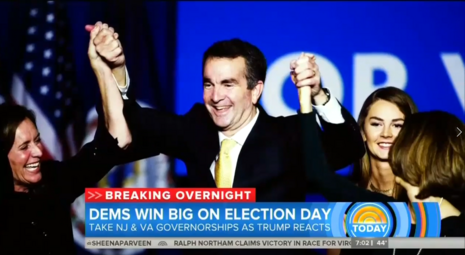 Over on the November 8, 2017 Today show, not-yet disgraced host Matt Lauer opened the show with a giddy tone: “Stinging rebuke: Tough election night for President Trump and the GOP.... The message sent by voters and who the President is pointing fingers at this morning.”

In a moment of unintentional comedy, Today reporter Kristen Welker played a clip of the newly elected Virginia Governor. A few years later, Ralph Northam would be caught up in a black face/KKK scandal regarding his college yearbook. But in 2017, Northam declared the end of bigotry:

Virginia has told us to end the divisiveness. That we will not condone hatred and bigotry. And to end the politics that have torn this country apart.

Will journalists in 2021 warn the Democrats about divorcing them from the unpopular Biden? There was some of that on Wednesday, but will it continue as the weeks and months go by? In 2017, the network journalists used a bad night for Republicans to hype the “lifting [of] a damaged party’s spirit.” In 2021, voters rejected an unpopular Democratic president and his policies. Will journalists realize just how much wreckage Biden has left in less than ten months?