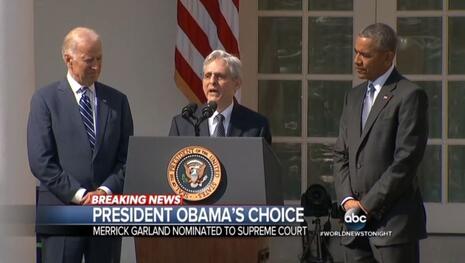 All three network newscasts this week buried the move by radical Attorney General Merrick Garland to investigate and harass parents who speak out on issues like Critical Race Theory at school board meetings across the country. A Justice Department memo slimed those challenging CRT and other issues as possibly being part of an insurgent “violent” effort to “intimidate” schools.

And while it shouldn’t be shocking that ABC, CBS and NBC are hiding these extreme actions by the Biden White House, they do expose just how corrupt the media have been in describing Garland from the very start.

Correspondent Pete Williams assured viewers, “On the bench, he’s been a moderate.” On that day’s World News Tonight, correspondent Terry Moran insisted, “As a judge, Garland is known as a moderate on the appeals court, though he would tip the balance of the Supreme Court by replacing staunch conservative Antonin Scalia.”

On the March 17, 2016 CBS This Morning, Jan Crawford attempted to calm Americans worried about Garland’s liberalism:

Garland is a moderate, a centrist. Now, I mean, he's certainly liberal. But by no means is he some kind of liberal flame-thrower. And I think you'll see the White House make the argument the President is not going as far left as some of the groups on the left would of wanted.

The day before, on the March 16 CBS Evening News, Crawford offered a reassuring word salad, describing the nominee as “a moderate liberal who builds consensus.” On the same show, Margaret Brennan repeated soothing Democratic talking points: “The White House thinks the American public is on its side and hopes Garland's sterling legal credentials and moderate political record will persuade some Republicans.”

MSNBC got into the act as host Ari Melber pretended that Garland is “what many call a judicial minimalist.”

As NewsBusters Deputy Managing Editor Nicholas Fondacaro explained on Wednesday, the networks this week were silent as parents pushed back on the “domestic terrorism” smear. Yet on September 30 and October 1, the CBS Evening News and NBC’s Today hyped the effort to label protesters as terrorists. CBS Homeland Security correspondent Jeff Pegues cheered:

Writing to President Biden, the National School Boards Association asked for help investigating the violent incidents and suggested the FBI monitor threats to board members likening these ‘heinous actions’ to ‘domestic terrorism.’

Garland is the same AG who is suing Texas in opposition to the state's new pro-life legislation. His Justice Department is also suing Georgia over its voting law. In other words, Garland sounds a lot like a partisan Democrat determined to enact his liberal agenda. Yet, the networks in 2016 tried to sell Americans a Supreme Court nominee who was a non-offensive “moderate.” Keep that in mind the next time they insist to you some Democrat is a centrist.