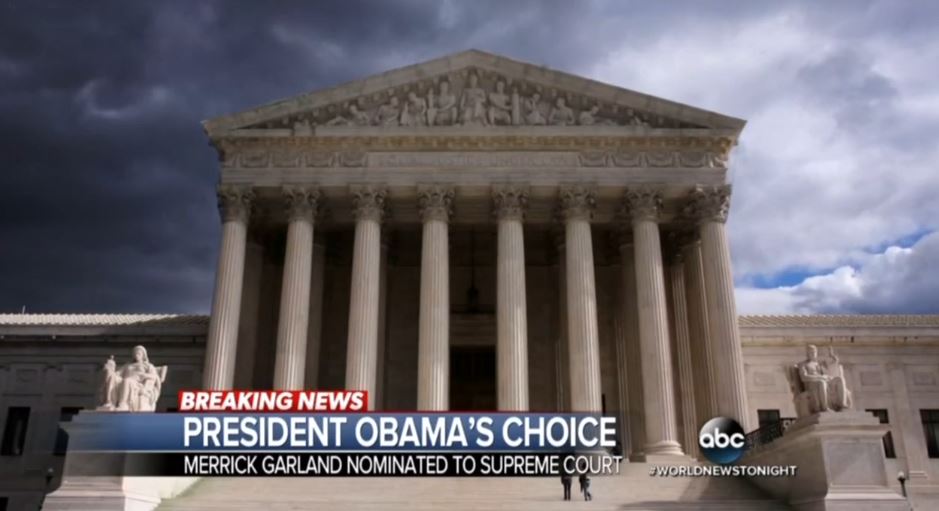 In the first 24 hours after Barack Obama nominated Merrick Garland to the Supreme Court, the big three networks spun the judge as a “moderate” or “centrist” as opposed to a “liberal.” ABC and NBC reporters never called him a liberal, while CBS correspondents used the word just twice (opting for “moderate liberal” twice more). The networks identified Garland as middle-of-the-road nine times.

The journalistic effort to stamp Garland as a “moderate” comes despite the judge’s past ruling against Second Amendment rights and a history of campaigning for Democratic presidential candidates. This conclusion also flies in the face of declarations of other outlets, including the liberal New York Times. The paper’s Upshot blog insisted that Garland is “substantially more liberal than Justice Scalia” and “is expected to be ideologically similar to Elena Kagan and Sonia Sotomayor, President Obama’s previous picks for the court.”

MRC analysts looked at the coverage of Garland on Wednesday's World News Tonight and Thursday's Good Morning America on ABC, the CBS Evening News and CBS This Morning, as well as the NBC Nightly News and the Today show.

ABC offered the fewest ideological labels, just a single reference on World News Tonight. Supreme Court correspondent Terry Moran equivocated: “As a judge, Garland is known as a moderate on the appeals court, though he would tip the balance of the Supreme Court by replacing staunch conservative Antonin Scalia.” Again, no use of the liberal label. 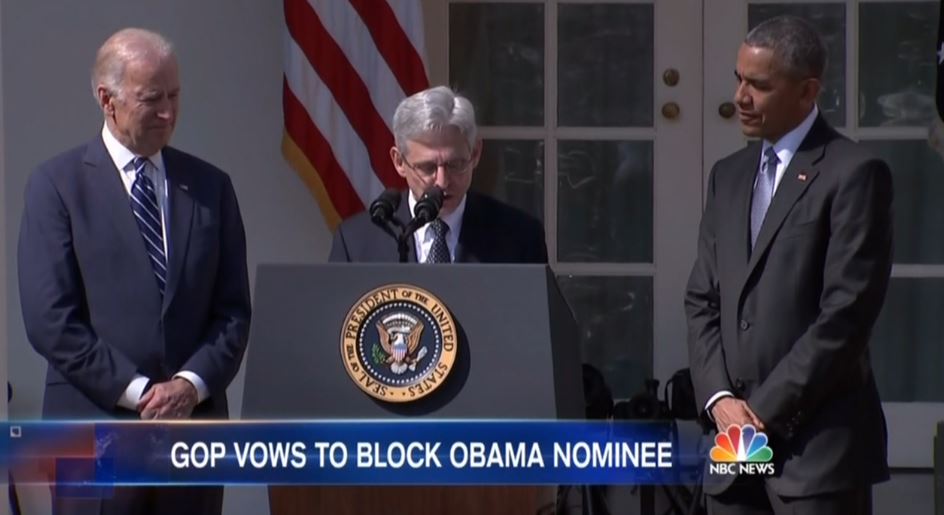 CBS was schizophrenic: Across two programs, there were three centrist/moderate labels. On two occasions, Garland was deemed a “liberal,” two other times a “moderate liberal.”  Breaking from ABC and NBC, Evening News anchor Scott Pelley informed, “The President named Garland, a liberal to, replace the late conservative Justice Antonin Scalia.” Chief legal correspondent Jan Crawford put the two labels together and said the judge is “considered a moderate liberal who builds consensus.”

On Thursday's CBS This Morning, Crawford described Garland as a reasonable pick and not a “liberal flame thrower.”

JAN CRAWFORD: Garland is a moderate, a centrist. Now, I mean, he's certainly liberal. But by no means is he some kind of liberal flame-thrower. And I think you'll see the White House make the argument the President is not going as far left as some of the groups on the left would of wanted. 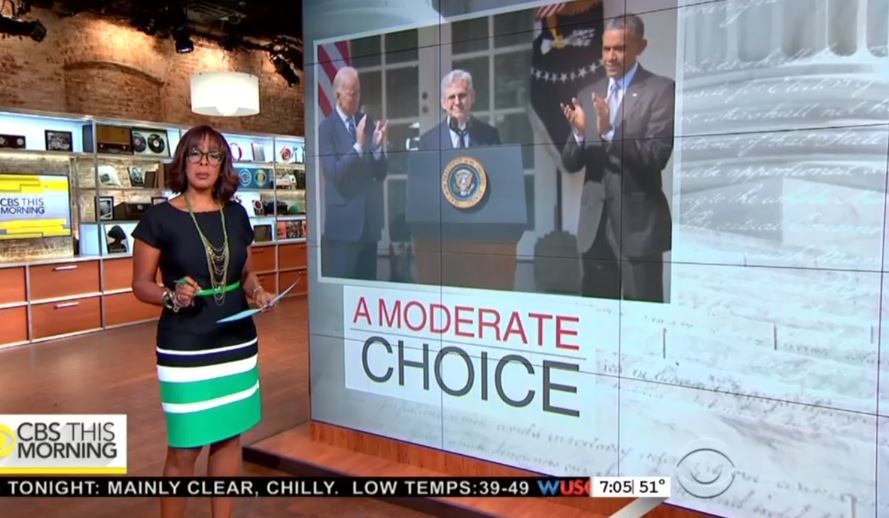 She lectured, “So, now, it's the Republicans’s time to compromise a little bit. By all accounts, Judge Garland is deeply experienced.” Foreseeing a win by Hillary Clinton, Crawford concluded, “Maybe Republicans will recognize that this guy is the best that they can hope for and finally they will go ahead and confirm him.”

In addition to the labeling by journalists, the NBC Nightly News included a clip from SCOTUSBlog editor Tom Goldstein. He described Garland as both a “centrist” and a “little bit to the left.” NBC’s Andrea Mitchell declared the judge “hardly a liberal.”

President Barack Obama's choice for the vacant seat on the Supreme Court was presented as a moderate that could have bipartisan appeal, but Merrick Garland has previously disclosed in official documents that he has offered his services to numerous Democratic presidential candidates. 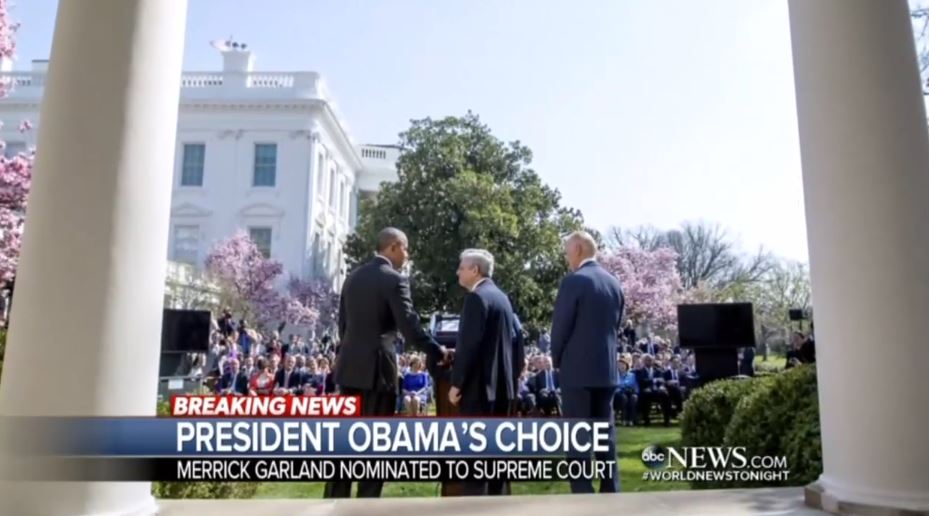 Buried in a questionnaire Garland submitted to the Senate Judiciary Committee in 1995 is his disclosure of volunteer work for Democratic politicians that stretched from his years as a college student up to Bill Clinton's presidential campaign in 1992.

"I provided volunteer assistance on a Presidential Debate for President Clinton in October 1992 and for Michael Dukakis in October 1988," Garland wrote in response to a question on his previous political involvement. "I did some volunteer work for Walter Mondale's presidential campaign in 1983-84. As a college student, I worked two summers for the campaign of my then-congressman, Abner Mikva, in 1972 and 1974."

National Review found concern for conservatives in Garland’s record on the Second Amendment:

Back in 2007, Judge Garland voted to undo a D.C. Circuit court decision striking down one of the most restrictive gun laws in the nation....He voted with Judge David Tatel, one of the most liberal judges on that court. As Dave Kopel observed at the time, the "[t]he Tatel and Garland votes were no surprise, since they had earlier signaled their strong hostility to gun owner rights" in a previous case. Had Garland and Tatel won that vote, there's a good chance that the Supreme Court wouldn't have had a chance to protect the individual right to bear arms for several more years.

Rather than reflexively deeming Obama’s choice a “moderate,” the networks should offer more skepticism and investigate Justice Garland’s ideology.