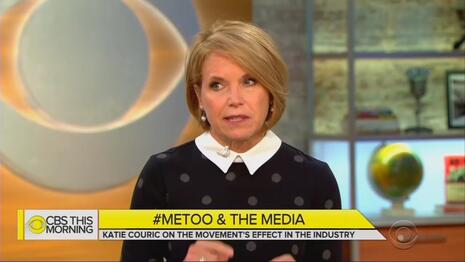 Venomous journalist Katie Couric has scores to settle with her fellow liberals in the press and she certainly does so in an upcoming book called Going There. The New York Post has plucked out some of the more shocking bits, including that she has been banned from promoting the book on CBS and apparently says of competitor Diane Sawyer: “I wonder who she had to blow” to get a scoop.

The longtime journalist seems to mostly stand by the disgraced Matt Lauer, calling him a “decent” man she felt “heartless to abandon.” According to the Post, Couric has been banned from book promoting on CBS. Apparently, the banishment occurred after word got out that the host recounted attempts by CBS (where she was then hosting the Evening News) to banish her to the “cheap,” “third place” morning show:

Couric describes how Moonves told her, “ ‘We’ve been thinking about you and what you’re good at. The evening news really doesn’t give you a place to showcase your talent.’ Oh, boy, here it comes … ‘Would you be interested in going to the morning show?’ he said. ‘You’re so great at it, and they could really use your help.’ ”

But she says she replied, “Absolutely not … I didn’t leave the morning show I helped make number one so I could go to the third-place morning show.”

She added, “I had come here to accomplish something, and if it didn’t work, it didn’t work. I’d rather leave the network than retreat to the morning show, which at the time was a cheap imitation of the other two.”

But she saves particular venom for former “Good Morning America” anchor Sawyer, 75, whom she says was everything she wasn’t — tall, blonde, with a voice “full of money.”

For instance, when Sawyer scored a big interview with a woman who’d given birth to twins at 57, Couric pondered: “I wonder who she had to blow to get that.”

Regarding Matt Lauer, who allegedly had a button that would lock women in his office, Couric admitted she “heard the whispers” about the Today host. But she didn’t want to know anything:

Although Couric initially thought it was “gross” that Lauer was cheating on his now ex-wife Annette, and taking advantage of a young staffer, she added: “The general rule at the time was, ‘It’s none of your business. A don’t-ask-don’t-tell culture where anything goes, and everything did.”

Is all this a surprise? Not really. Couric told Bravo back in 2017 that Lauer liked to pinch “me on the ass a lot.”

The book will be released on October 26. Don’t expect the press to cover her decades of hack liberal bias. Don’t worry though. We’ll remind everyone. Go here for her history of attacking gun rights.