Katie Couric: Matt Lauer Pinched ‘Me on the Ass a Lot’

In retrospect, this is awkward. On Tuesday, Matt Lauer was fired from NBC for alleged gross sexual misconduct. In June of 2012, his former co-host, Katie Couric, appeared on Bravo’s Watch What Happens. Host Andy Cohen wondered, “You co-hosted the Today show with Matt Lauer for 15 years. What is Matt’s most annoying habit?”

Couric paused and responded, “He pinches me on the ass a lot.”

On June 22, 2017, Lauer appeared on the same show and was asked about his “turn ons.” His creepy responses involved “spooning,”  “role playing” and sexy Halloween costumes. 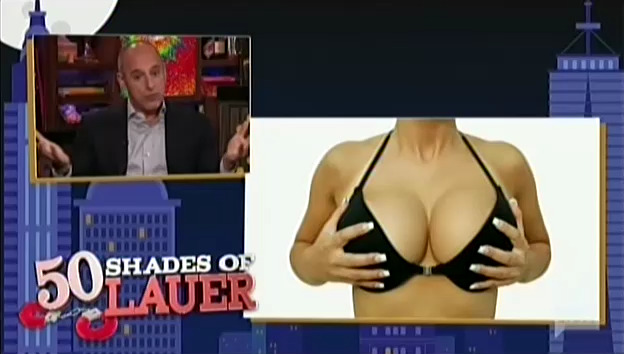 ANDY COHEN: Can you believe that for 20 years Matt Lauer has been there pretty much every time we’ve turned the TV on, yet we still have no idea really what turns him on. Here’s what, that ends now with 50 Shades of Lauer. Matt, please allow me to probe you with some questions.

COHEN: Matt Lauer, spooning, turn on or turn off?

COHEN: Cleavage, turn on or turn off?

COHEN: Okay, role playing, turn on or turn off?

COHEN: Feet, turn on or turn off? Are you a foot man?

LAUER: I’m not against feet. I wouldn’t say I’m a fetishist, but I don’t mind feet.

COHEN: Halloween costumes, turn on or turn off?

LAUER: Turn on in a weird kind of way.

Hat tip to the MRC's Kyle Drennen for the transcript.