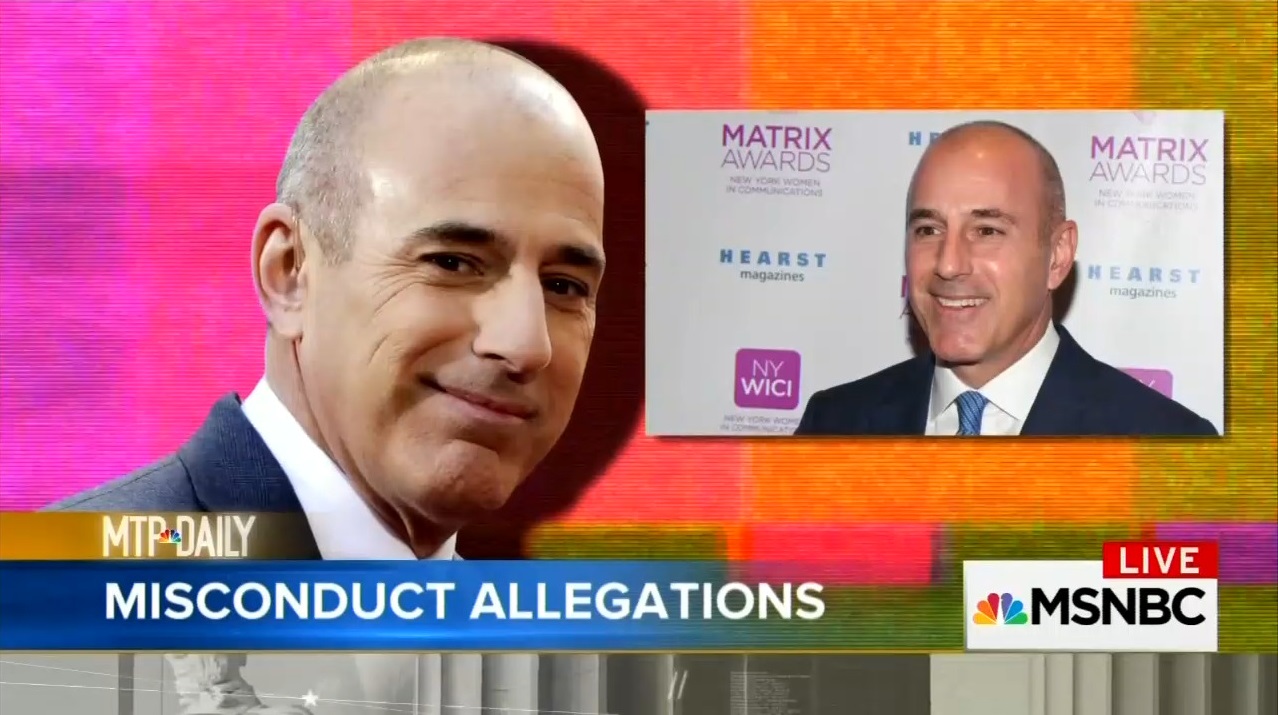 Hours after NBC fired Today co-host Matt Lauer over allegations of sexual misconduct, Variety published its long-awaited story on Wednesday afternoon, detailing disturbingly lewd stories about Lauer. They ranged from exposing himself to lewd texts to having a button on his desk to lock his office door.

Writers Ramin Setoodeh and Elizabeth Wagmeister pursued this story for two months and the results have not only led to Lauer’s ouster, but a ripple affect across the industry and network. For their story, they found “three women who identified themselves as victims of sexual harassment by Lauer.”

As the co-host of NBC’s “Today,” Matt Lauer once gave a colleague a sex toy as a present. It included an explicit note about how he wanted to use it on her, which left her mortified.

On another day, he summoned a different female employee to his office, and then dropped his pants, showing her his penis. After the employee declined to do anything, visibly shaken, he reprimanded her for not engaging in a sexual act.

He would sometimes quiz female producers about who they’d slept with, offering to trade names. And he loved to engage in a crass quiz game with men and women in the office: “f—, marry, or kill,” in which he would identify the female co-hosts that he’d most like to sleep with.

Along with the disturbing allegations, Setoodeh and Wagmeister detailed behavior by NBC looking the other way regarding Lauer’s misdeeds, indicating the network has a serious problem when it comes to sexual harassment when you add reports that they sought to destroy Ronan Farrow’s bombshell stories on Harvey Weinstein.

“Several women told Variety they complained to executives at the network about Lauer’s behavior, which fell on deaf ears given the lucrative advertising surrounding ‘Today.’ NBC declined to comment. For most of Lauer’s tenure at ‘Today,’ the morning news show was No. 1 in the ratings, and executives were eager to keep him happy,” the pair explained.

The pair reported how Lauer’s on-air persona was that of “America’s squeaky-clean dad” but that reputation stopped when the cameras were off as he was obsessed with the “bodies and looks” of women, despite being a married man.

The middle portions of this bombshell reported were equally disturbing as the lede paragraphs. Variety revealed more allegations that included lewd texts, a lock button, and his wife traveling with him during the 2012 London Olympics because she didn’t trust him to behave:

He was known for making lewd comments verbally or over text messages. He once made a suggestive reference to a colleague’s performance in bed and compared it to how she was able to complete her job, according to witnesses to the exchange. For Lauer, work and sex were intertwined.

“There were a lot of consensual relationships, but that’s still a problem because of the power he held,” says a former producer who knew first-hand of these encounters. “He couldn’t sleep around town with celebrities or on the road with random people, because he’s Matt Lauer and he’s married. So he’d have to do it within his stable, where he exerted power, and he knew people wouldn’t ever complain.”

Lauer, who was paranoid about being followed by tabloid reporters, grew more emboldened at 30 Rockefeller Center as his profile rose following Katie Couric’s departure from “Today” in 2006. His office was in a secluded space, and he had a button under his desk that allowed him to lock his door from the inside without getting up. This afforded him the assurance of privacy. It allowed him to welcome female employees and initiate inappropriate contact while knowing nobody could walk in on him, according to two women who were sexually harassed by Lauer.

This was part of a pattern. According to multiple accounts, independently corroborated by Variety, Lauer would invite women employed by NBC late at night to his hotel room while covering the Olympics in various cities over the years. He later told colleagues how his wife had accompanied him to the London Olympics because she didn’t trust him to travel alone.

Earlier in the month, Lauer saw friend and longtime Today booker Matt Zimmerman be fired for sexual misconduct. Little did we know, Lauer would soon face the same fate.

As for the claims that Lauer’s behavior were universally shocking, Variety showed that this wasn’t the case and anything but a secret:

Lauer’s conduct was not a secret among other employees at “Today,” numerous sources say. At least one of the anchors would gossip about stories she had heard, spreading them among the staff. “Management sucks there,” says a former reporter, who asked not to be identified, speaking about executives who previously worked at the show. “They protected the s— out of Matt Lauer.”

Some producers told Variety they were conflicted about what to do around Lauer. They worried that their careers would be sidelined if they didn’t return his advances. “There is such shame with Matt Lauer not liking you,” the former employee added. “I did this special with him and we are traveling and I had a cold sore on my lip and I heard him say to Bryant Gumbel, ‘She has this really ugly cold sore on her lip,’ like that was something to be ashamed of. He was just really cruel.”