The next time you hear liberal reporters talk about independent journalism, remember how CBS and ABC allow their news shows to become corporate shills for the streaming services of their bosses. On Thursday, CBS This Morning journalists promoted the “awesome” new Paramount+, hyping just how “excited” everyone was for the newly-named media platform.

Paramount+ rebranded after CBS All Access, the previous incarnation, wasn’t a hit. Yet, correspondent Vlad Duthiers  turned full PR, hyping, “One week away from the re-branded streaming platform Paramount+. It is filled with reboots of some of your favorite shows.” Hijacking the show for their bosses, he parroted talking points: “We expect to see Paramount+ to launch next Thursday, March 4th.”

Co-host Tony Dokoupil robotically touted, “And it’s also got a ton of content, like Titanic, Indiana Jones, Forrest Gump, Mission Impossible, Top Gun!” Again, this was during the news show, not a commercial. As though this were the most amazing thing he’d heard, Duthiers continued, “I know! That’s the old stuff! But the new stuff is what I’m excited about! Frasier and there’s Star Trek reboots coming back. It’s going to be awesome!” 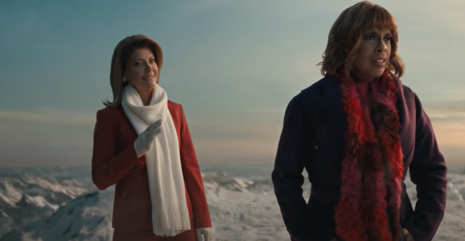 The show only belatedly arrived on controversial issues like Joe Biden reopening the so-called “kids in cages” facility at the border. But there’s time for this? Not mentioned was the fact that Paramount enlisted This Morning co-host Gayle King and CBS Evening News anchor Norah O’Donnell for a Super Bowl commercial promoting Paramount+. (See screen shot at right.)

Last September, ABC’s Good Morning America buried the news that Disney filmed near brutal Chinese concentration camps for Mulan on Disney+. Yet earlier in the year, the morning show led the promotion train for the movie. In November of 2019, GMA hosts devoted a whopping 17 minutes to promoting the launch of Disney+, the streaming service for their corporate overlords. Co-host Robin Roberts embarrassed herself by gushing, “Christmas comes early!”

So the next time you hear ABC and CBS touting the independence of their news coverage, remember their zeal for promoting their bosses’s streaming services.

The Paramount+ commercial disguised as a news segment was sponsored by Uber and Hyundai. Click on the links to let them know what you think.

VLAD DUTHIERS: One week away from the re-branded streaming platform Paramount Plus. It is filled with reboots of some of your favorite shows. One of them ---

DUTHIERS: Everybody's laughing at the table because we all love Frasier.]

DUTHIERS: The Cheers spinoff is returning, and so is Kelsey Grammer in the lead role. Very cool. Tommy Pickles --- this one I'm not that familiar with --- and the gang are also ready for a reboot. The nickelodeon cartoon Rugrats!

ANTHONY MASON: I spent time with my kids watching that one!

GAYLE KING: When you have children you know all the shows.

DUTHIERS: The sketch comedy show Inside Amy Schumer is also back after a five-year hiatus. There will also be news and documentaries and 60 Minutes+ a spinoff of the legendary news magazine

DUTHIERS: We expect to see Paramount+ to launch next Thursday, March 4th.

DUTHIERS: I know! That’s the old stuff! But the new stuff is what I’m excited about! Frasier and there’s Star Trek reboots coming back. It’s going to be awesome!