Shocked Gayle King: Wait, Is It Possible Andrew Cuomo Was Less Than Honest? 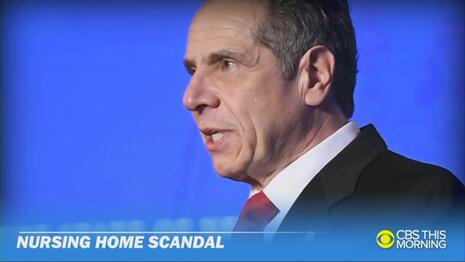 Now that the political dam has burst, most of the networks are actually offering significant coverage about Andrew Cuomo and his attempted cover-up of the COVID nursing home disaster in New York. It seemed to dawn on a surprised CBS This Morning co-host Gayle King that it’s *possible* Andrew Cuomo may have been less than honest about all of this.

After a full report detailing on how the Democrat appeared to downplay the number of nursing home deaths in a cover-up, King allowed, “During the height of this pandemic, though, [Cuomo] seemed to be the only leader meeting with the public, giving us information when we were crying for information. It appears that he was giving it to us straight. Now there are more questions to be answered.”

Co-host Anthony Mason detailed the trouble Cuomo was in with Republicans and Democrats in New York.

After intense criticism, New York Governor Andrew Cuomo is denying that the number of coronavirus deaths connected to nursing homes has been vastly under-reported. An aide to the governor recently said in a call with Democratic lawmakers that the real numbers were withheld. She said there were fears the Trump administration would use the information against them.

Introducing the segment, Mason attempted to tout the reporting CBS had done on nursing homes in general as a way of connecting it to Cuomo: “Mola Lenghi has been looking into nursing home deaths, a story we've been covering for months.”

CBS has done several stories on COVID and nursing homes, but the network’s reporting on Cuomo had made every effort to protect the Democrat. In May of 2020, CBS This Morning covered the “devastating toll” of the pandemic with NO mention of Cuomo.

In June, This Morning filed a report on a Massachusetts nursing home putting “COVID-19 positive and those with no COVID-19 symptoms into one unit." What state does that also sound like? Might have been a good time to mention Cuomo’s New York? Apparently not.

Finally, in August, CBS This Morning reporter David Begnaud explained, “I don't know if you know this, but here in the U.S. more than 40,000 nursing home residents are believed to have died from the coronavirus and 6,500 deaths happened in the state of New York. There are hearings being held in New York to address those deaths and the policies that may have led to some of them."

No. Viewers may not have known about Cuomo's role because CBS has been spinning for the Democratic governor.

The spin on CBS was sponsored by Hyundai. Click on the link to let them know what you think.

ANTHONY MASON: After intense criticism, New York Governor Andrew Cuomo is denying that the number of coronavirus deaths connected to nursing homes has been vastly under-reported. An aide to the governor recently said in a call with Democratic lawmakers that the real numbers were withheld. She said there were fears the Trump administration would use the information against them. Mola Lenghi has been looking into nursing home deaths, a story we've been covering for months. Mola, good morning.

MOLA LENGHI: Well, good morning, Anthony. Governor Cuomo’s critics accuse his administration of hiding data that relates to nursing home deaths. This as the Governor comes under fire for a policy that some allege can may have actually contributed to nursing home deaths. Now, of course, these controversies raised the broader question of what the public deserves to know from its elected officials and when. Now, the Governor denies he or his staff did anything wrong here. But some who have lost loved ones, they disagree.

LORRY SULLIVAN: There is just no sense of peace.

LENGHI: On April 24th, 2020, Lorry Sullivan was baking a birthday cake for her mother Lorraine's 89th birthday when she got the call. Her mother had died. Lorraine had contacted Coronavirus at Our Lady of Consolation, a New York nursing and rehab facility. What would you say to other families who have family members and loved ones in nursing homes?

SULLIVAN: I would not put anybody that belonged to me in a nursing home. I wouldn't.

LENGHI Nationwide, more than 125,000 nursing home residents have died of coronavirus. In a recent report State Attorney General Latisha James allege that New York under counted by as much as 50 percent. It’s currently estimated to be around 15,000.

SULLIVAN: Now, I don't know if she was a number? Was she counted? Is she one of the numbers that was buried?

ANDREW CUOMO:  Losing a loved one in a nursing home during this situation was extraordinarily painful.

LENGHI New York Governor Andrew Cuomo and the state department of health have been heavily criticized for directing nursing homes in March to take in coronavirus patients to relieve stress on hospitals. Although the directive was amended in may, the governor defended Monday.

CUOMO: Residents who were leaving the hospitals were not likely to be contagious. They were going to be what's called cohorted. Cared for in areas that are separate.

LENGHI: But when we looked into nursing home deaths in August, we found that may not always have been the case. We spoke to a former employee at Our Lady of Consolation where Sullivan's mother died. The former employee who asked to remain anonymous told us in March and April, the facility took in COVID-positive patients from hospitals and that healthy residents were put in rooms with those patients who were infected.

LENGHI In a statement Catholic Health on behalf of Our Lady of Consolation told us they “cannot comment on individual cases but are focused on delivering high-quality, compassionate care and strive to protect all residents and staff.” After our August reporting New York's department of health told us they were launching an investigation into the facility over the former employees' allegations. We checked on the status of that allegation, and the Department of Health told us Monday they found no citations specific to infectious control practices. There's some evidence coronavirus cases are declining in nursing homes due to vaccinations. But death rates are still high. According to the AARP Public Policy Institute, as of mid-January, the state with the highest rate of nursing home deaths was Indiana, with more than three deaths per every 100 residents, followed by nearly 3-in-100 in Oklahoma, Pennsylvania and Kentucky. In New York, it's more than 1 and a half for every 100. For Sullivan, it's hard to move forward, not knowing exactly how her mom was infected or what her final days in the nursing home were like.

SULLIVAN:  These things matter to family. They matter.

LENGHI: What would closure look like at this point? You don't think it's going to happen?

SULLIVAN:  I don't know, how do you get closure when you don't know anything?

LENGHI: We filed a Freedom of Information request back in July with the Cuomo administration and Department of Health asking how many nursing homes accept taxpayer dollars to take in COVID-positive patients. We received a reply in late January, six months later, saying they don't maintain those records, Tony, we're filing an appeal.

TONY DOKOUPIL: All right, thank you very much. Two big questions, one are the numbers accurately reported.

DOKOUPIL: And, two, was it a mistake to put people back in the nursing homes who may have contributed to the spread of the virus?

KING: The governor definitely has questions that need to be answered. During the height of this pandemic, though, he seemed to be the only leader meeting with the public, giving us information when we were crying for information. It appears that he was giving it to us straight. Now there are more questions to be answered.

DOKOUPIL: I don't think it's going away.

DOKOUPIL: Family members are continuing to say we need more information here and they are going to get to the bottom of it.

MASON: We saw how distressed that woman was.

KING: And we don’t blame them for wanting to know.