Hey, Remember When Executive Orders Were Controversial? Not Anymore! 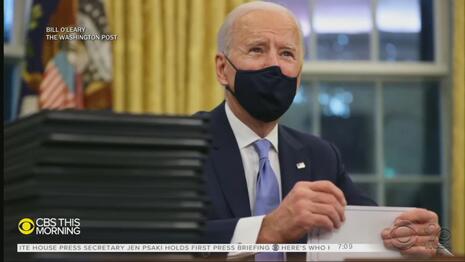 Nothing to see here. The network morning shows on Thursday hyped Joe Biden rolling back some of Donald Trump’s “most controversial moves” via executive orders. While the ex-President’s original actions may be scandalous in the eyes of ABC, CBS and NBC, there was nothing controversial or even liberal about Biden’s actions.

On ABC’s Good Morning America, Mary Bruce exclaimed that the Democrat is “taking steps to undo some of President Trump's most controversial moves by rejoining the Paris Climate Accords and undoing that so-called Muslim travel ban.” So Trump’s moves were controversial, but undoing them isn’t?

GMA co-host Robin Roberts cheered, “President Biden is hitting the ground running as he begins his first full day in that office already signing more than a dozen executive orders.”

Over on CBS This Morning, Ed O’Keefe replaced “controversial” with “signature.”

In a redecorated Oval Office, the new President signed 17 other executive orders and actions, mostly rolling back President Trump's signature policies. They end the so-called Muslim travel ban, cancel the Keystone XL Pipeline limit, and hold funding for the southern border wall. The U.S. Will also rejoin the Paris Climate Accord.

No hint or discussion about what rejoining the Paris Climate Accords means for America and whether it’s good.

In August of 2020, CBS This Morning's Major Garrett compared Trump's executive orders to "static electricity" and dismissed them as “mostly annoying” and actions that “don’t really solve the problem.” 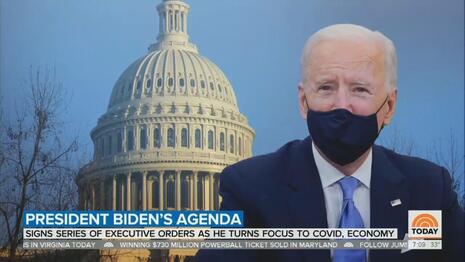 On NBC’s Today, Peter Alexander touted, “The President moving aggressively to reverse much of his predecessor’s legacy.” He added:

Nothing controversial or liberal there.

The Biden propaganda on ABC’s Good Morning America was sponsored by USAA. On NBC’s Today, it was promoted by Honda. On CBS This Morning, Progressive insurance. Click on the links to let them know what you think.

GEORGE STEPHANOPOULOS: Biden, Harris and the new administration get right to work signing a flurry of executive orders as they look to the future.

ROBIN ROBERTS: George, President Biden is hitting the ground running as he begins his first full day in that office already signing more than a dozen executive orders on the same day he was sworn in. Our senior White House correspondent Mary Bruce is live now in Washington with what's next for the new administration. Good morning, Mary.

MARY BRUCE: Good morning, Robin. Well, that flurry of executive orders will continue today. Biden taking steps to tackle this pandemic including establishing a COVID testing board, developing guidelines to safely re-open schools and taking steps to try to overcome the disproportionate impact of this pandemic on people of color. The new President wasted no time getting to work yesterday signing an order to mandate masks on all federal lands and taking steps to undo some of President Trump's most controversial moves by rejoining the Paris Climate Accords and undoing that so-called Muslim travel ban. Now, the new president can do a lot on his own but that big plan of his, that big ticket item, that nearly $2 trillion stimulus bill to provide some relief from this pandemic, that is going to take congressional action and will test his promise to unite a divided Washington, Robin.

ROBIN ROBERTS: Mary, there's something that president Biden said that really caught the attention of many when he said he will not tolerate, he will not put up one moment anyone on his staff being disrespectful.

BRUCE: Yeah, he is sending that message loud and clear telling his white house staff and appointees and I quote, “point blank, if you're ever working with me and I hear you treat another colleague with disrespect, talk down to anyone, I promise you, I will fire you on the spot.” President Biden, Robin, is not messing around adding that decency has been lacking over the last four years in the White House and reminded his staff, quote “You work for the people. I work for the people.” Robin.

ANTHONY MASON: The new President's work begins with the rollout of dozens of executive orders and actions, but he's already facing push back from Republicans.

MASON: The new President got straight to work in a partially revamped Oval Office, signing a series of executive orders and actions. He's expected to sign ten more today as part of an aggressive new effort to control the pandemic. Our senior White House and political correspondent Ed O’Keefe has the details. Ed, good morning.

ED O’KEEFE: Good morning, Anthony. Those executive orders are designed to expand access to testing and to vaccination programs across the country. And in another sign of how things are changing this morning, the new White House chief medical adviser, Dr. Anthony Fauci, addressed the World Health Organization, a group the United States is set to rejoin. His remarks came exactly one year to the day of the first confirmed case of COVID-19 this country. President Biden's new nationwide COVID strategy includes getting 100 million vaccines into the arms of Americans by the end of April and safely reopening schools in the next 100 days. The Biden administration plans to set up vaccine centers at stadiums and community centers and to deploy federal personnel to help administer shots. Overall, Mr. Biden is expected to sign ten executive orders today that, among other things, require mask wearing on planes and trains and establish a health equity task force focused on racial disparities. Mr. Biden and his staff got straight to work on day one.

JOE BIDEN: I thought with the state of the nation today it's no time to waste. Get to work immediately.

O’KEEFE: In a redecorated Oval Office, the new President signed 17 other executive orders and actions, mostly rolling back President Trump's signature policies. They end the so-called Muslim travel ban, cancel the Keystone XL Pipeline limit, and hold funding for the southern border wall. The U.S. Will also rejoin the Paris Climate Accord.

O’KEEFE: The administration is focused on setting a new tone.

SAVANNAH GUTHRIE: And while the new administration celebrated the day, President Biden also moved quickly to start implementing an agenda during his very first hours in office, signing a series of executive orders, as you see there. Peter Alexander’s at the White House with that part of the story. Peter, good morning.

PETER ALEXANDER: Hey, good morning to you on this, President Biden’s first full day in office. He’s already rolling out a long list of new executive orders focusing squarely on combating the coronavirus after an Inauguration Day filled with pomp and new policy. The president moving aggressively to reverse much of his predecessor’s legacy.

JOE BIDEN: There’s no time to start like today.

BIDEN: Long way to go. These are just executive actions. They are important, but we’re going to need legislation for a lot of the things we’re going to do.

ALEXANDER: The new president prioritizing the coronavirus pandemic, urging all Americans to wear masks for 100 days and imposing a mask mandate on all federal property.

For new members of the Biden administration, a virtual swearing in.

BIDEN: We have to restore the soul of this country and I’m counting on all of you to be a part of that.

ALEXANDER: And a stern warning from the new commandner-in-chief.

BIDEN: If you’re ever working with me and I hear you treat another colleague with disrespect, talk down to someone, I promise you I will fire you on the spot. On the spot. No ifs, ands, or buts.

ALEXANDER: President Biden also delivering on a day one campaign promise, rejoining the Paris Climate Accord.

And while the outgoing president discarded most traditions surrounding the peaceful transfer of power, leaving Washington before the inauguration, he did leave his successor a personal note in the Oval Office.

BIDEN: The President wrote a very generous letter. I have – because it was private, I will not talk about it until I talk to him.

ALEXANDER: The White House press secretary saying there are currently no plans for the two men to speak. On tap today, that sweeping plan to combat COVID. President Biden will sign ten executive orders, including one to direct agencies to use the Defense Production Act and other emergency powers to try to speed up the manufacturing of testing and those critical vaccine supplies. They’ll also detail their strategy to address several other key goals, like safely reopening schools.

GUTHRIE: Alright, and we are actually going to have a live interview with the new incoming CDC director in just a few minutes. Peter, thank you.