With Fate of the Senate in the Balance, Nets Hide Radical Raphael’s Anti-U.S., Anti-Military Hate 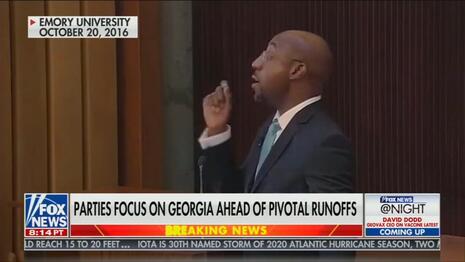 Journalists have already shifted from attack dogs for Donald Trump to cuddly puppies in how they cover Joe Biden. But they’ve been strangely quiet on the background of a man who could help the Democratic Party win the U.S. Senate in a Georgia runoff election.

Raphael Warnock is facing incumbent Republican Kelly Loeffler,. He is also a radical leftist who has condemned serving in the military and trashed America’s ally Israel. Yet ABC, CBS and NBC have shown no interest in these incendiary beliefs that could torpedo his campaign and Democratic control of the Senate.

Here are some of the shocking things Warnock has said or been connected to. Network journalists should do their jobs and investigate, something that cable outlets have at least attempted.

As National Review reported, Warnock has spewed anti-Semitic hate at the state of Israel:

“We saw the government of Israel shoot down unarmed Palestinian sisters and brothers like birds of prey,” Warnock said in a 2018 sermon. “It is wrong to shoot down God’s children like they don’t matter at all.” Warnock issued that denunciation of Israel after Hamas led a mass incursion of the Israeli border, and the Israeli military responded with the justifiable use of lethal force. But in Warnock’s telling, Israelis are “birds of prey” who viciously kill innocent Palestinians, who are “brothers and sisters.”

He has also praised the bigoted, anti-Semitic Jeremiah Wright. Morning Joe's Willie Geist on November 12 wondered, "What is your relationship to [Wright]? Do you believe he's an anti-Semite?" Warnock couldn't say.

In 2016, Warnock used Trump to convict America: “If it is true that a man who has dominated the news and poisoned the discussion for months needs to repent, then it's doubly true that a nation that can produce such a man and make his vitriol go vile needs to repent. America needs to repent for its worship of whiteness!”

Unlike the partisan, protective networks, Fox News covered the attacks on the United States.

Kudos to CNN’s Jake Tapper on Sunday’s State of the Union for noting Republicans bringing up a connection to Fidel Castro:

JAKE TAPPER: Let me ask you about one of those attacks. Because Senator Loeffler keeps mentioning on the campaign an incident from 1995 when you were a youth pastor at a New York church which hosted a speech hosted by Fidel Castro. Now, you’ve said you had nothing to do with that invitation. So just to clarify for our viewers, did you attend the speech? And do you understand why there are so many people who view Castro as a murderous tyrant and not someone to be celebrated?

RAPHAEL WARNOCK: I'll tell you what I understand. I understand why Kelly Loeffler is trying to change the subject. I was a youth pastor. I had nothing to do with that program. I did not make any decisions regarding the program. I've never met the Cuban dictator. And so I'm not connect to him.

The Georgia runoff election is January 5. Control of the Senate and the fate of Biden’s agenda is at stake. Also up for grabs? Whether journalists will do their jobs and speak truth to power on the history of a radical extremist like Raphael Warnock.