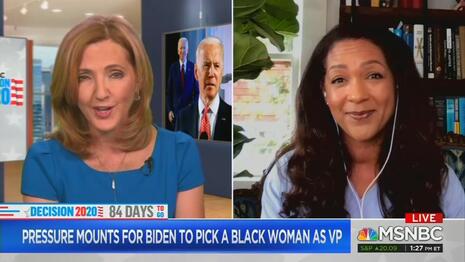 Joe Biden has not yet announced his vice presidential pick yet and MSNBC is already “game planning” how to fight the sexism and racism that is most definitely going to follow. (They assure us.) In an attempt to make any criticism of this mysterious candidate unacceptable, host Christ Jansing on Tuesday talked to liberal She the People founder Aimee Allison.

Jansing tossed a softball to Allison, saying, “You mentioned the letter that you signed. Yesterday more than 100 prominent black men also signed an open letter to Biden urging him to pick a black woman and calling out attacks on ambitious women.”

She plotted strategy with the Democrat: “What's your expectation, Aimee, of what's facing Biden's pick, particularly if it's a black woman, and what should the game plan be for what's coming and dealing with it?”

The host later demanded, “And if Biden doesn't choose a black woman, do you believe there will be a price to pay?”

On July 9, 2018, before Donald Trump chose Brett Kavanaugh for the Supreme Court, ABC blasted the “controversial nominee” before he was even named. Without knowing the identity, ABC’s Nightline tweeted, “Tonight on Nightline, @TerryMoran reports on the controversial Supreme Court Justice pick and the possible implications for the country.”

This liberal attack on Americans was sponsored by Procter & Gamble and Dunkin’ Donuts. Click on the links to let them know how you feel.

CHRIS JANSING: As we wait for Biden's VP announcement, there's mounting pressure for him to choose a black woman. A choice that would, of course, make history. Joining me now, Amy Ellison, the founder and president of She the People. It's good to see you. Look, this is not new to you. You've been pushing for Democrats to do more for women candidates of color for years now. So with that experience, put the importance of the Biden decision in context for us and why you believe it's so crucial.

AIMEE ALLISON (She the People Founder and President): It's good to be with you, Chris, and hard to overstate the importance of this announcement this week. It will set the tone for the last 80 or so days. And we believe that it's the most important decision right now that would set the stage to close the enthusiasm gap and bring the Democratic Party base together

CHRIS JANSING: And if Biden doesn't choose a black woman, do you believe there will be a price to pay?

JANSING: You mentioned the letter that you signed. Yesterday more than 100 prominent black men also signed an open letter to Biden urging him to pick a black woman and calling out attacks on ambitious women writing this. “Was Joe Biden ever labeled too ambitious because he ran for president three times? Should President Obama not have made him the VP because he had to worry about his loyalty when he clearly had ambitions to be president himself?” What's your expectation, Aimee, of what's facing Biden's pick, particularly if it's a black woman, and what should the game plan be for what's coming and dealing with it?

ALLISON: Well, I think we can expect and we're already seeing attacks for the vp contenders, those who are being vetted. We know that for a woman of color, there's a particular ugly kind of attack, and it comes from left, right and center, to be totally honest as black women and women of color assert themselves as leaders. And the attacks, they're ugly and personal. Attacks that say, you know, dismiss a woman's ambition to be president as if there's something wrong with that, are really steeped in racist and sexist beliefs about what a woman of color or black woman's place is in American democracy.

And so we're pushing back against that. I was really happy and very pleased to see the letter of solidarity written by black men. Men that are leaders in their own right. Like Reverend William Barber who is holding up a moral and very powerful message there. I think that we need to see solidarity from all corners, and to focus on the issues to really see who lives in this country, to uplift the issues of racial, economic and social justice. That's what people are listening for. That's what the polls show Americans want. And so I think as we continue to go and the announcement comes this week, we're going to see a group of the black women that I've been organizing with, black women united who are volunteers who are giving their time and expertise to push back on racist and sexist attacks but also joining other groups, women-led groups to lead the country in making sure that there is no room for racism and sexism in the conversation about leadership that we focus on the really pressing, important issues to Americans.