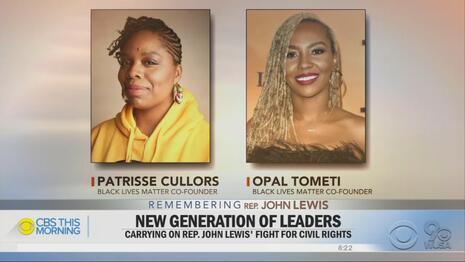 CBS This Morning rightly honored the life and legacy of civil rights icon John Lewis on Monday. Yet, they dishonored this tribute with a softball interview of the radical, Marxist, dictator-supporting co-founders of Black Lives Matter. Co-host Gayle King cheered, “Ahead, we’ll take a look at how Congressman Lewis inspired the next generation to two co-founders of the Black Lives Matter movement.”

Tony Dokoupil introduced the interview this way: “Congressman John Lewis's legacy has inspired a new generation of civil rights activists including those in the Black Lives Matter movement.”

Who are Patrisse Cullors and Opal Tometi? Tometi is a fan of the brutal thug Nicolás Maduro, the dictator of Venezuela. In 2015, she tweeted this: “Currently in Venezuela. Such a relief to be in a place where there is intelligent political discourse.”

[In 2015,] Tometi was hobnobbing with Venezuela’s Marxist dictator Nicolás Maduro, of whose regime she wrote: “In these last 17 years, we have witnessed the Bolivarian Revolution champion participatory democracy and construct a fair, transparent election system recognized as among the best in the world.”

What about Patrisse Cullors? The MRC’s Kyle Drennen wrote a fact sheet on Black Lives Matter on July 6. He explained:

- Black Lives Matter was founded in 2013 by “three radical Black organizers.” One of those co-founders, Patrisse Cullors, revealed in a 2015 interview that she and her comrades were “trained Marxists.”

- Cullors was mentored for years by Eric Mann, a member of the far-left domestic terrorist organization Weather Underground. She also has named wanted cop-killer Assata Shakur (Real name: Joanne Chesimard) as a “leader” that “inspires” her.

Yet, NONE of this came up in the CBS interview. Instead, reporter Jericka Duncan tossed softballs like this: “What did you all learn from [John Lewis] and how are using his message to continue your efforts in Black Lives Matter?... What do you think Congressman Lewis is saying right now?”

Outrageously, Duncan didn’t say anything when Tometi said this was her goal: “Continue to fight for justice and freedom and equity, and do it in a nonviolent way, that love is the foundation.” How does the murderous regime of Maduro fit with love and non-violence? Looting and violence?

On July 10, co-host King enthused that “we all need to take a class” from another radical BLM activist. This woman said of looting, “Burn this bitch to the ground!” Make no mistake about it, CBS is lying to you when it comes to who and what BLM really is.

Toyota and Home Advisor sponsored CBS’s propaganda and efforts to hide the radical nature of BLM. Click on the links to let them know how you feel. Here is the Twitter handle of the journalist who interviewed the two BLM co-founders: @Jerickaduncan.

GAYLE KING: Ahead, we’ll take a look at how Congressman Lewis inspired the next generation to two co-founders of the Black Lives Matter movement. 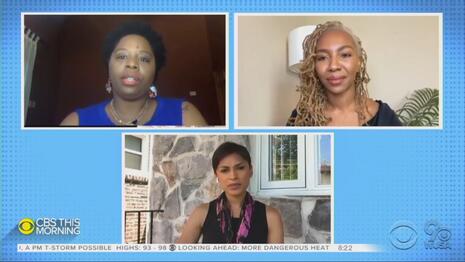 JERICKA DUNCAN: What did you all learn from him and how are using his message to continue your efforts in Black Lives Matter?

PATRISSE CULLORS: You know, I think I learned that this is a long haul fight and struggle, that the work that we do matters most if we stay inside of it and if we recognize that nothing changes over night.

OPAL TOMETI: So much of what we get to do in our day is because of the tremendous work that our ancestors and freedom fighters before us did. And we stand on the shoulders of so many who came before us.

CULLORS: I saw his ability and capacity to behold the weight of the struggle but also there was a levity to how he showed up. I think that's incredibly powerful for me as an organizer who's been in this struggle, but also for other younger organizers, younger than us, who are newly joining this fight.

DUNCAN: What do you think Congressman Lewis is saying right now?

DUNCAN: We also talked about this moment right here which we just heard Speaker Pelosi mention. And what it meant to those co-founders of Black Lives Matter. It's that image of Congressman Lewis standing strong there on Black Lives Matter plaza. You know the co-founder, one of the co-founders of Black Lives Matter, Patrisse Cullors put it to me like this. She said what comes to mind when she saw that photo is that we are our ancestors wildest dreams. And she even said that what made it special is that Congressman Lewis was that ancestor, but he got to see his dream to fruition before his death.