James O'Keefe: CBS Faked a Line of Cars to Make Corona Tests Seem Harder to Get 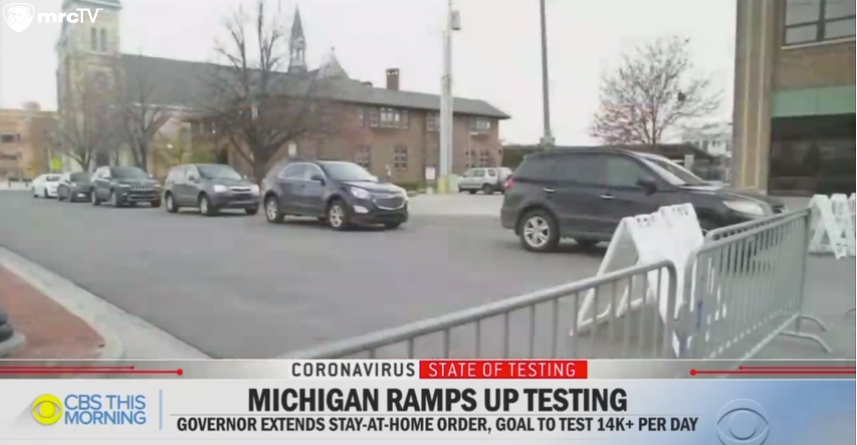 Did CBS fake a line of cars in Michigan in order to make it seem like COVID-19 testing was even more difficult? That’s what Project Veritas creator James O’Keefe asserts in a new video. Footage of the May 1 CBS This Morning shows a long line of vehicles waiting for drive-by testing in Michigan.

According to O’Keefe, “A CBS News crew pulled medical professionals off the floor at the Cherry Medical Center in Grand Rapids, Michigan, to line up in their vehicles so a CBS film crew would have a long line for their COVID-19 coverage.”

O’Keefe talked to an anonymous witness in Grand Rapids who alleged that CBS “told us that medical personnel were taken away from treating patients and making the line longer for actual patients wait for the COVID-19 test.”

Here’s the actual video from the segment that aired on last Friday’s CBS This Morning:

In the segment, co-host Anthony Mason tinged it all with politics, chiding, “Michigan’s Republican-led legislature has voted to sue the state’s Democratic governor to stop her extending the coronavirus state of emergency there. Hundreds of protesters, some of them with guns, gathered at the state capitol yesterday demanding an end to emergency restrictions.”

Co-host Gayle King added, “Only six states have reported more cases than Michigan, but fewer than two percent of its people have been tested for the virus.”

Nick Ross, a corporate cleaning site supervisor at the Cherry Health facility, said he was there when the CBS News crew arrived and set up the video shoot at the COVID-19 testing site in the parking lot, "Apparently the news crew wanted more people in the line because they knew it was scheduled.”

“It's just annoying cause we could have done other stuff,” said one registered nurse there recorded with a hidden camera by a Project Veritas insider.

Now, remember how journalists melted down over the White House presenting a “propaganda” video of scripted comments on corona. On April 14, John King lashed out: “At times, It bordered on dangerous,” adding “The President began with a propaganda video. He played it in the room, that cherry-picked moments. This was a Trump-is-awesome video, at taxpayer expense.”

CBS News President Susan Zirinsky gave a statement to O'Keefe and is denying any attempt at fakery. But the network is removing a portion of the video.

CBS News did not stage anything at the Cherry Health facility. Any suggestion to the contrary is 100% false. These allegations are alarming. We reached out to Cherry Health to address them immediately. They informed us for the first time that one of their chief officers told at least one staffer to get in the testing line along with real patients. No one from CBS News had any knowledge of this before tonight. They also said that their actions did not prevent any actual patients from being tested. We take the accuracy of our reporting very seriously and we are removing the Cherry Health portion from the piece.

Most people know that B-roll video for news events is packaged and shaped for the TV audience. But journalists show their hypocrisy when they freak out over carefully “cherry-picked moments.” Like an exaggerated line of cars?

Here is the video O'Keefe produced for his Project Veritas site:

Here’s the transcript from the May 1 segment. Click "expand" to read more.

ANTHONY MASON:. Michigan’s Republican-led legislature has voted to sue the state’s Democratic governor to stop her extending the coronavirus state of emergency there. Hundreds of protesters, some of them with guns, gathered at the state capitol yesterday demanding an end to emergency restrictions.

GAYLE KING: Only six states have reported more cases than Michigan, but fewer than two percent of its people have been tested for the virus. In our series on the state of coronavirus testing, Adriana Diaz shows how Michigan is trying to improve a system that has failed some of its people.

KAILA CORROTHERS: This is like having your heart ripped from your body.

DIAZ: Kaila Corrothers’ mother, Deborah Gatewood, worked at Beaumont Hospital outside Detroit, drawing blood for thirty-one years. But when she came down with a fever last month, her daughter says that same hospital denied her a COVID test more than once. How many times did she try to get tested?

ADRIANA DIAZ: And every time what happened?

KAILA CORROTHERS: She got sent home each time. She lost faith in the whole healthcare system.

DIAZ: Beaumont Health told CBS News, "We’re doing everything we can to evaluate, triage and care for patients based on the information we know at the time. We grieve the loss of any patient.."

ADRIANA DIAZ: Michigan Governor Gretchen Whitmer has since expanded testing criteria to include milder symptoms and all essential workers. We spoke to one of your constituents who lost her mother to COVID-19 after being turned away from a testing center four times. Did you expand the criteria too late?

GRETCHEN WHITMER: I think that`s the saddest reality of a country that was under-prepared for a global pandemic. The fact that we`ve never had enough tests, that the federal government didn’t prepare contributes to the fact that we had to ration tests at the front end of this pandemic. And I recognize that lives were lost.

DIAZ: Testing has doubled in recent weeks, but shortages of swabs and chemical solution are still an issue.

GRETCHEN WHITMER: The CDC guidelines are that we should be testing between one to two percent of our population over the course of a week in order to have some confidence that it`s safe to reopen, and it`s going to be a while before we get there.

ADRIANA DIAZ: The governor’s goal is to test at least fourteen thousand people a day. Right now they`re doing roughly half that. The epicenter is the Detroit area, which accounts for more than seventy percent of the state`s cases, and disproportionately people of color.

DIAZ: There, walk-up testing has been set up to reach residents without cars. Has it been hard for you to get a test?

DIAZ: In Grand Rapids, because of expanded criteria and more state funding, we found a twenty-five percent increase in testing at Cherry Hill. Tasha Blackmon is the CEO.

TASHA BLACKMON: So, we do have enough testing kits, but we’re really short on gowns. We`re also short on N95 masks. We cannot expand further without any additional personal protective equipment.

TASHA BLACKMON: Cherry Health has laid off about twenty-five percent of our staff.

DIAZ: By executive order, the governor has shut down most of the economy, drawing ire from a small but vocal minority. Some think she`s gone too far, like Sheriff Ted Schendel of rural Benzie County.

DIAZ: I detect you feel a certain way about that.

SCHENDEL: Well, yeah. Because it’s just one right after the other. So, one-size-fits-all kind of approach. I can use my county example. We have zero deaths. Let`s give us a chance to get out, go back to work, put food on the table for our families.

DIAZ: But the governor says testing above all else will help determine when to fully reopen.

WHITMER: Some people will think we should move faster. I`m going to listen to the public health experts, and I'm going to work with the business side of the equation to make sure that we've got the protocols to keep people safe when it is safe to start to reengage.

DIAZ: The governor says she may further open the economy region by region if the data shows it`s safe. Now putting Michigan back to work won`t make up for the roughly three billion dollars the state estimates it will lose because of the pandemic.