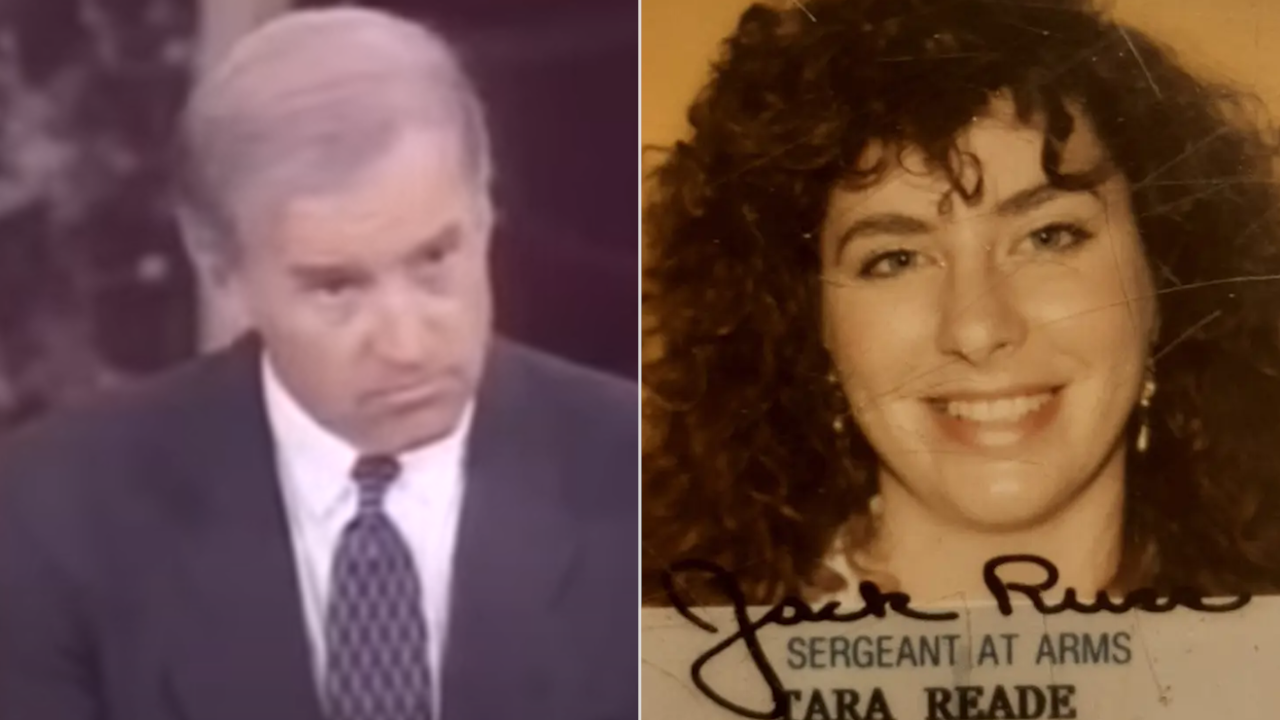 It's been more than a month since ex-staffer Tara Reade publicly accused presumptive Democratic presidential nominee Joe Biden of sexual assault, but you probably would have no idea if you relied on ABC, CBS, CNN, MSNBC, NBC or PBS for your news. Since March 25, those networks either completely ignored or barely mentioned the scandal, even after Reade's story was significantly bolstered Friday after the Media Research Center unearthed and posted an August 1993 video clip of Reade's mother calling CNN about her daughter's problem with a "prominent senator."

Even the liberal New York Times and Washington Post have published lengthy stories investigating the charges (on April 13), yet ABC and NBC haven't spent even a single second on the story. CBS has devoted a paltry 63 seconds, while PBS gave it a mere seven minutes. The all-day news networks CNN and MSNBC should have posted significantly higher totals, but they haven't: MSNBC managed only four and a half minutes in mid-April, while CNN only ended its complete blackout after we posted their own video from 1993, which validated a key claim from Reade.

It's not as if they haven't had time to promote Joe Biden's presidential campaign: During this time, ABC, NBC, CNN and MSNBC all invited Biden on their airwaves for interviews, but they refused to confront him even once about these allegations. Out of 77 questions, not a single one asked the former Senator and Vice President about Reade's charges. 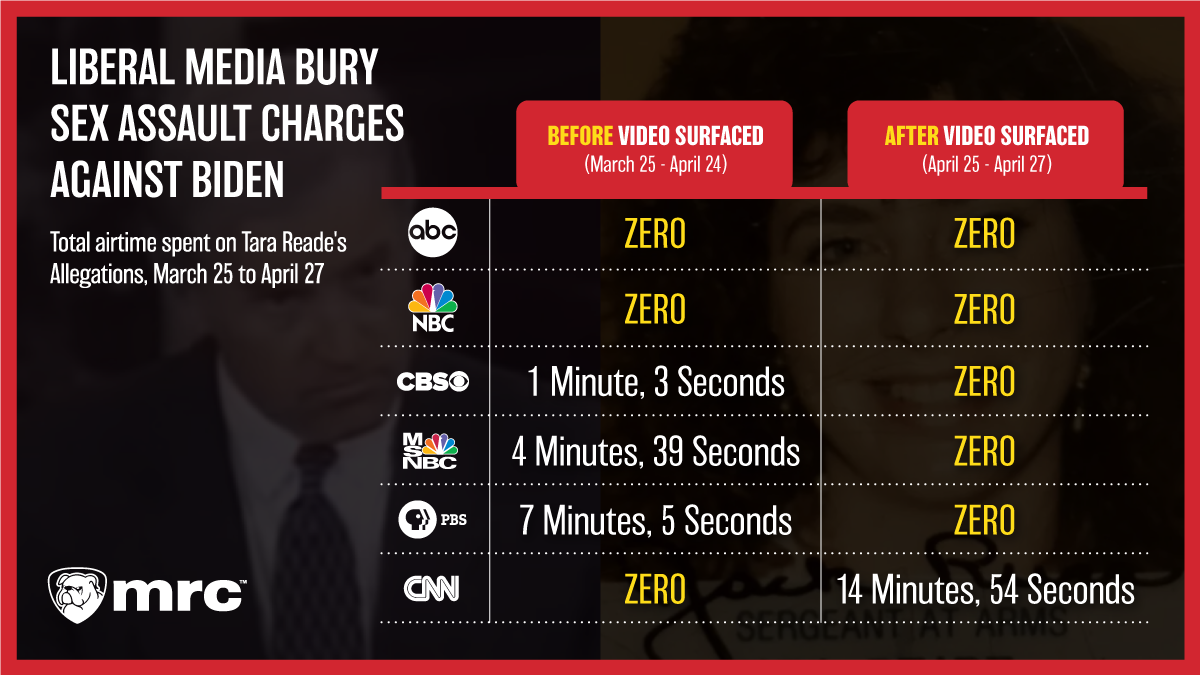 On Friday afternoon, The Intercept website reported that Reade’s mother called into CNN’s Larry King Live on August 11, 1993 to ask for advice on how to deal with the situation. Journalist Ryan Grim quoted Reade as telling him: “I remember it being an anonymous call.” This call did take place, and the Media Research Center on Friday provided video evidence of it.

Despite the new revelation, ABC and NBC have still refused to cover the story. CNN, which had been conducting a similar blackout, finally gave in and reported on it Saturday.

MRC analysts examined the amount of coverage of the Reade allegations on broadcast networks ABC, CBS, NBC, PBS and cable outlets CNN and MSNBC. They also counted the total number of interview questions to Biden on those networks between March 25 (the day the allegations went public) and April 27. (The study includes the morning and evening newscasts and cable coverage. For a breakdown of what was included, see the note at the end of this article.)

In addition to not forcing Biden to respond to the claims, ABC and NBC completely boycotted the story. CNN went from zero coverage for 31 days (CNN.com posted online only stories) to 14 minutes and 54 seconds on Saturday. Reporter M.J. Lee ridiculously told Wolf Blitzer that Reade had only “recently” accused Biden. (Again, it was March 25.) Showcasing how late CNN was to all this, Lee on Saturday admitted that the network “interviewed Reade for the first time on the phone last night.”

CBS mentioned Reade once on April 16 during CBS This Morning. In an interview with former Democratic contender Bernie Sanders, co-host Tony Dokoupil managed a scant 1 minute and 3 seconds. CBS did not return to the story after the most recent developments.

In a one-month period, the liberal MSNBC offered a paltry 4 minutes and 39 seconds. Despite the newest revelations involving Reade’s mother, the network has not returned to the story. For instance, with three hours of available airtime on Monday, Morning Joe skipped it entirely. Yet PBS, with just a couple news shows (NewsHour and Amanpour and Co.) beat MSNBC’s. PBS managed a total of 7 minutes and 5 seconds.

In just over a month, the grand total of ABC, CBS, NBC, PBS, CNN and MSNBC’s Reade coverage amounted to 27 minutes and 31 seconds, as of April 27. However, 14 minutes and 54 seconds of that came from CNN on April 25.

As for actual Joe Biden interviews, both networks and cable channels repeatedly passed up opportunities to simply ask if the accusations were true.

Meet the Press host Chuck Todd offered an example of the types of questions they asked (instead of forcing Biden to respond to the assault allegations). On March 29, Todd said of Trump’s response to coronavirus: “Do you think there is blood on the President’s hands, considering the slow response?”

CNN had the most opportunities to ask Biden about Reade. The network had a town hall on March 27. There were 23 questions total on a variety of non-sexual assault-related topics. On March 31, Brooke Baldwin asked four questions to Biden. On April 16, CNN hosted another town hall for an additional six questions. In total, the network asked 33 questions.

As for the networks, NBC asked Biden 16 questions. Nine of them on the March 29 Meet the Press and another seven on the April 7 Today 3rd Hour. ABC had a single interview on the April 5 This Week, amounting to six questions. (CBS has not had a Biden interview since the accusation broke.) Still no questions about Reade.

The lack of coverage became more embarrassing in mid-April. On April 13, The New York Times published a front-page story. Writers Lisa Lerer and Sydney Ember described in graphic detail Reade’s allegation of how, in 1993, Biden “pinned her to a wall in a Senate building, reached under her clothing and penetrated her with his fingers.” The Washington Post, also on April 13, featured a front-page investigation.

These two outlets are prominent establishment newspapers. Yet, still nothing on ABC and NBC.

It’s not as though the late-night comedy shows (which were not counted in this study) were any better. For instance, Biden appeared on the April 21 edition of The Late Late Show With James Corden. The interview ran for a whopping 24 minutes. Number of questions on Reade? Zero.

The contrast to media coverage for then-Supreme Court nominee Brett Kavanaugh is stark. In addition to blanketing the airwaves with the accusations of Christine Blasey Ford, the networks virtually ignored any evidence that would exonerate the conservative nominee. MRC Research Director Rich Noyes wrote in September of 2018:

The mantra of the many in the #MeToo movement is to “believe all women.” Journalists, at the very least, should give a fair hearing to serious accusations against any major public figure. With the case of Tara Reade, the press has failed. Instead of listening to women, they have ignored one raising inconvenient accusations against the Democratic Party’s hope to defeat Donald Trump.

[Methodology note: This study looked at the morning and evening newscasts, as well as Sunday morning interview shows, on ABC (World News Tonight, Nightline, Good Morning America and This Week), CBS (CBS Evening News, CBS This Morning and Face the Nation) and NBC (NBC Nightly News, Today, Sunday Today and Meet the Press). For PBS, the NewsHour and Amanpour and Co. It also looked at full day coverage on CNN and MSNBC. Late night comedy shows on the networks were not included. Neither were daytime network shows such as The View.]