Is the Coronavirus Bigoted? CBS Brings on Far-Left ‘Anti-Racism’ Expert to Find Out

Could the coronavirus be racist? CBS This Morning explored that angle on Monday as reporter Jericka Duncan brought on a far-left network contributor (a man who has refused to condemn the anti-Semitism of Congresswoman Ilhan Omar). The segment began by examining the perfectly valid topic of whether certain groups of people are more likely to get the virus. But then Duncan veered into a discussion with Ibram X. Kendi, explaining, “CBS News contributor Ibram X. Kendi is also the director of the Antiracist Policy Center at American University.”

Who is Kendi? The CBS contributor appeared on the July 16, 2019 edition of This Morning and defended Congresswoman Omar, a woman who called Israel "evil":

She was very specific in criticizing the policies of a country. In this case, the country was Israel. Trump has specifically criticized racial groups of people. When he said that Mexicans are rapists. When he said that black people, a trait of blacks is laziness. This is a condemnation of a racial group of people. That is, effectively, racism. When we criticize a country's policies, that is not — when you criticize Israeli policies, that's not anti-Semitic. But when you say there's something wrong with Jews, that is. I haven't heard her say that.

So, it would seem that he can’t be too much of an expert on fighting bigotry. Yet, on March 10, 2020, CBS again brought him on to talk about the racism of words like these: Black Monday, black sheep, blackballing, blackmail, blacklisting.

During parts of the segment on Monday, the coronavirus was linked to racism. Duncan introduced Milwaukee’s Public Health Commissioner, noting that she “calls racism a public health issue.” Again, obviously, if certain groups are more prone to get the virus, that’s a problem and data should be collected. But what is the point of bringing on political activists like Kendi? A man who couldn’t even condemn obvious anti-Semitic bigotry?

TONY DOKOUPIL: One thing we don't have is any official statistics that show the coronavirus toll by demographic. But in some communities, the pandemic appears to be disproportionately affecting people of color. Our national correspondent Jericka Duncan has been looking into this. Jericka, good morning. We heard David Begnaud report earlier today that he observed mostly black men in the ICU in the hospital where he was. Very interesting finding there. What have you found? 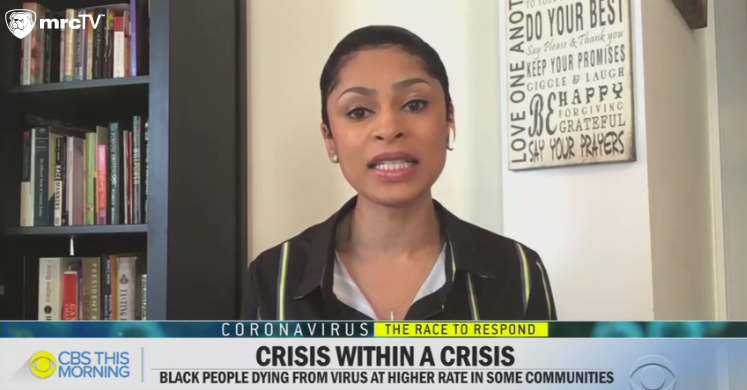 JERICKA DUNCAN: Well, it no secret, Tony, that African-Americans have a higher rate of things like diabetes, asthma, hyper tension, those underlying conditions that we talked about that led to the deaths of people with coronavirus. And because of that, one local health commissioner who calls racism a public health issue says she's taking the lead by collecting important information that she says could help save lives.

JEANETTE KOWALKIK: We're in the middle of the storm now. We need as much data as possible. Right now we're flying blind.

DUNCAN: Milwaukee Health Commissioner Jeanette Kowalkik is overseeing roughly a million residents in Milwaukee county. Of the 40 people who have died so far because of the coronavirus in your county, what percentage of those people are black?

DUNCAN: African-Americans make up 26 percent of the population.

DUNCAN: Right now, the CDC is not collecting data on the race of those who have tested positive or died from coronavirus. Important to actually document the race of the people who are infected and dying.

DR. UCHE BLACKSTOCK: Everyone will be affected by this. But there are some communities and populations are that are going to be affected even more significantly.

BLACKSTOCK: The reason why we need to discuss this issue and to collect the racial and ethnic demographic data on who is tested, who has the disease and who is dying from it, is so that we can properly allocate health care resources equitably to the communities that need it.

DUNCAN: Dr. Blackstock works part time at urgent cares. Can you describe the make-up of the people in your waiting room?

BLACKSTOCK: We're noticing more black and brown and immigrant patients seeking care. A lot of patients are essential workers, a lot of them are service workers.

DUNCAN: She says testing is still not readily available. How many COVID-19 tests are you all able to give each day?

BLACKSTOCK: We are instructed that we probably should not test more than one in ten patients.

DUNCAN: So, ten percent. No more than 10 percent of the people that come through every day.

BLACKSTOCK: Our criteria is really we're focusing on the highest risk patients.

DUNCAN: And according to a new report by WBEZ Public Radio in Chicago, an analysis of the county found that 70 percent of people in Chicago who have passed away because of coronavirus are black. And you're talking about nearly 300 deaths in the whole state of Illinois because of coronavirus. But definitely important information when you look at how we track other diseases, other viruses, and this being a pandemic. I'm sure there are a lot of people that are hungry for that information right now.

GAYLE KING: I'll say, Jericka. This is such an important story. We've heard the saying all the time "Knowledge is power," and all of your experts seem to say that you need more information to know exactly what you're dealing with and how we cathedral to fight it. So glad that you’re raising this issue.