CBS This Morning on Tuesday mostly ignored the findings of its own poll on the coronavirus and the government’s handling of it. The network allowed a scant 10 seconds to the news that a majority, 53 percent, approve of the President’s response. Relegated to online is the news that more Americans trust Donald Trump to given information than the media itself.

In total, the morning show allowed just 19 seconds on CBS’s own poll. Co-host Gayle King opened the show with this bit of data from the poll: “A new CBS news poll says three quarters of Americans, 72 percent, believe it will take months or longer for this virus to be contained.” A few minutes later, co-host Tony Dokoupil briefly offered this information: “We want to get you more on a new CBS poll. While most Americans do not think the Trump administration was prepared for the coronavirus pandemic, 53% do approve of the way the President is handling it.”

Without citing additional data, he cryptically added, “Although that is changing.” Not mentioned on CBS This Morning is the trust level for the media. It’s only at 43 percent, compared to 44 percent for Trump. That part of the poll can only be found on CBSNews.com:

Comparably fewer, 44%, trust President Trump, and 43% trust the national media, but the partisan splits both elicit are especially notable. Republicans trust the president for accurate information on the virus (90%) as much as or more than they trust medical professionals (90%) and the CDC (84%).

In 2009, the networks allowed very little coverage of the Obama administration botching its goal of vaccines for the H1N1 swine flu vaccine. The MRC's Brent Baker wrote:

On the CBS Evening News, fill-in anchor Harry Smith reported: “Now to the H1N1 flu. Federal health officials admitted today their projected timetable for producing the vaccine was way off. They originally said there would be about 40 million doses by the end of the month. But as of today, there's less than half that number.” Substituting on the NBC Nightly News, Ann Curry blandly announced: “President Obama declared the swine flu pandemic a national emergency over the weekend, but still the amount of vaccine to protect against it is running way behind what the government had promised.”

GAYLE KING: A new CBS news poll say three quarters of Americans, 72 percent believe it will take months or longer for this virus to be contained. 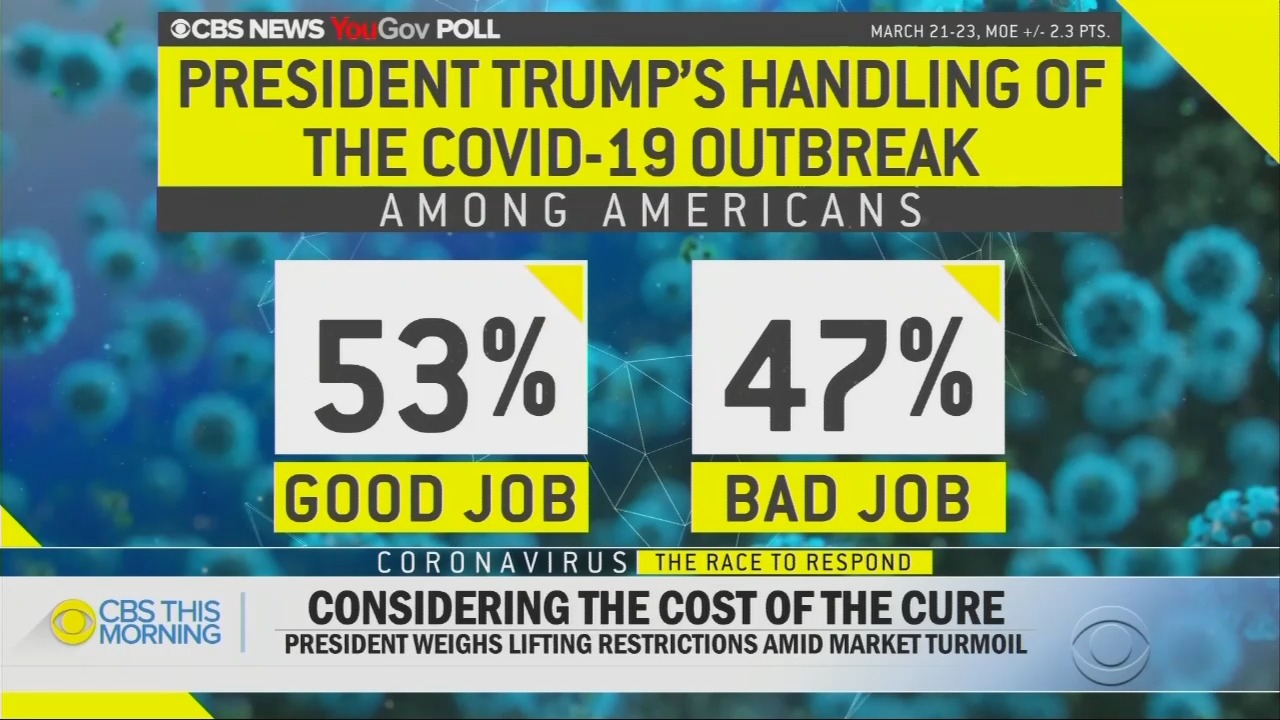 TONY DOKOUPIL: We want to get you more on a new CBS poll while most Americans do not think the Trump administration was prepared for the coronavirus pandemic, 53% do approve of the way the President is handling it. Although that is changing. The President now appears to be backing away from recommendations that people should stay home over a long period of time because of his concerns about the effects on the economy.

DONALD TRUMP: If it were up to the doctors they would say let's shut down the entire world because, again, you are up to almost 150 countries. So, let's shut down the entire world and when we shut it down, let's keep it shut for a couple of years. You know, can't do that. That's why I talk the cure being worse than the problem. We can't have the cure be worse than the problem.

TONY DOKOUPIL: So, CBS News has not heard any recommendation from any doctor about a multi-year shut down. Although certainly a short term shutdown is on the way. Paula Reid is at the White House for us. Paula, good morning. What do the President's comments suggest what he's most likely to do next?

PAULA REID: The president appears to be laying the ground work to re-open sectors of the economy and send people back to work. President said on Monday he'll make an announcement about whether to ease the current restrictions. But at a nearly two hour briefing last night the President said it will be a matter of weeks, not months, before he tries to re-open the country. Asked if he was risking lives by doing this the President insisted he believes the dire economic conditions could lead to suicides which would result in a higher death toll.

Though many medical experts disagree with that assessment. The President said going forward he'll consult with medical experts on this effort along with others but when pressed he would not say who else he's talking to about getting advice about how to guide the country through this unprecedented economic turmoil. Now, Dr. Anthony Fauci is one who many Americans say they want to hear from when it comes to coronavirus. He was not at last night's briefing. The President was asked about this. The President insisted he believes the doctor is a very good man. But said the world-renown infectious disease expert was not at the briefing because they were not discussing his area of expertise. Gayle?

KING: A lot of people wondering where was Dr. Fauci yesterday. Thank you very much, Paula.