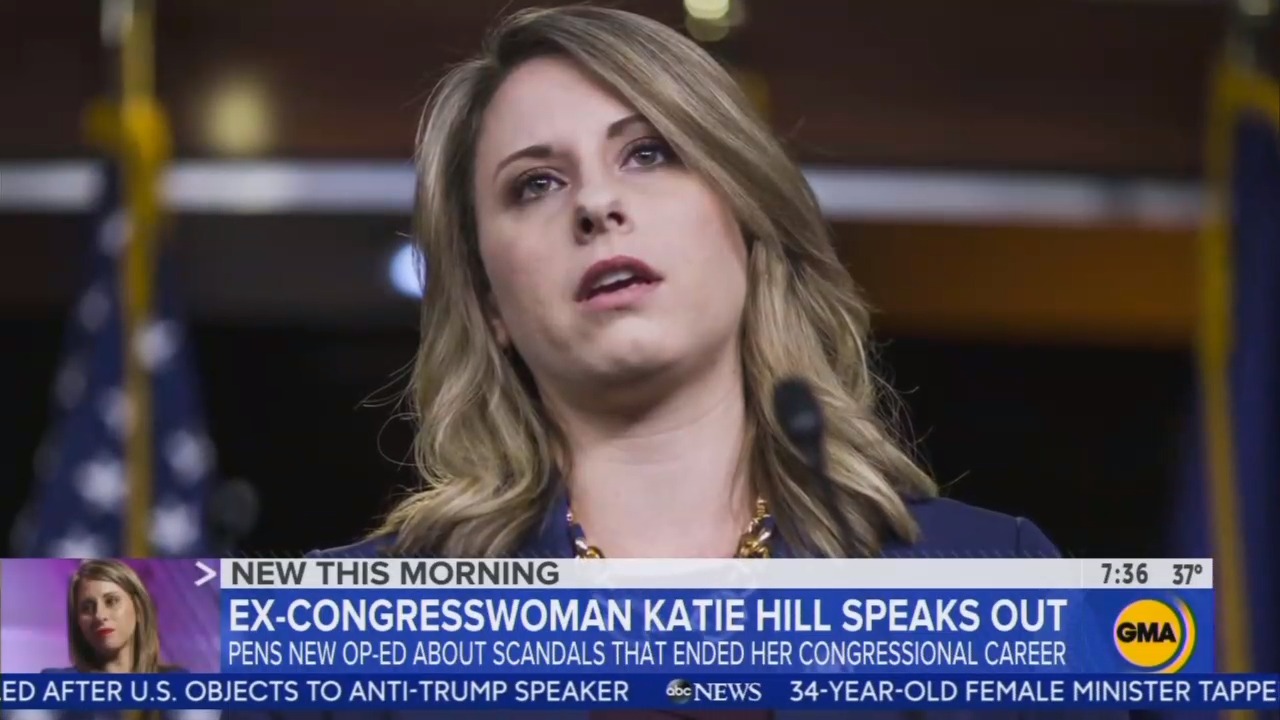 Good Morning America on Monday spun Katie Hill, a California Democrat who resigned in the wake of a bizarre sex scandal, as a victim of bullying. The story by reporter Linsey Davis never mentioned her political affiliation and tried to mislead viewers into believing Hill was smeared.

Hill resigned after nude pictures of her appeared online, some with what appeared to feature a World War II Nazi-era tattoo. She admitted to an affair with a campaign staffer, but denied a relationship with a congressional staffer. Yet, Davis left out the first part, portaying Hill as the victim: “The one-time rising political star says she contemplated suicide after nude photos of her surfaced online along with allegations she had an improper relationship with a congressional staffer, which she denies.”

But the affair with the campaign staffer is not in dispute. Hill informed constituents, admitting to its impropriety:

During the final tumultuous years of my abusive marriage, I became involved in a relationship with someone on my campaign. I know that even a consensual relationship with a subordinate is inappropriate, but I still allowed it to happen despite my better judgment. For that I apologize. I wish nothing but the best for her and hope everyone respects her privacy in this difficult time.

Yet, Davis ignored this part. Instead, the journalist fretted, “The former congresswoman going public with some extremely private thoughts and moments. She talks about the embarrassment and pain of reading cruel articles, comments and texts about her.”

Through it all, the segment NEVER mentions that Hill is a Democrat. Instead, Davis described how the politician doesn’t want to let down Girl Scouts who believe in her. Sounding like a press release, she added, “Hill says the following day she wrote her final speech and then put on her red battle uniform and war paint to call out what she calls a double standard in Washington.”

Journalists seem to have jumped on this angle as a way of rehabilitating Hill. Initially, the journalistic response was to ignore the scandal.

A transcript of the segment is below. Click "expand" to read more.

ROBIN ROBERTS: Now to that deeply personal op-ed from former Representative Katie Hill speaking out after her resignation from Congress amid an ethics probe. Hill says she was devastated when intimate photos of her were leaked online, saying she experienced some very dark days but she's vowing not to give up. Linsey Davis is here with more. Good morning, Linsey.

LINSEY DAVIS: Deeply personal, indeed. Good morning to you, Robin. The former congresswoman going public with some extremely private thoughts and moments. She talks about the embarrassment and pain of reading cruel articles, comments and texts about her. And not only her wishing she were dead, but she actually describes one night in vivid detail where she almost took her own life.

DAVIS: This morning, former California Representative Katie Hill breaking her silence. Opening up about the ethics and revenge porn scandals that ended her career in Congress less than a year after it began. And the dark days that she says followed. In a New York Times op-ed titled “Katie Hill, it's Not Over After All,” the one-time rising political star says she contemplated suicide after nude photos of her surfaced online along with allegations she had an improper relationship with a congressional staffer, which she denies. The 32-year-old resigned in October, “She says I knew it was the best decision for me, my family, my staff, my colleague, my community but that didn't make it any easier.”

HILL: I'm hurt. I'm angry. The path that I saw so clearly for myself is no longer there.

DAVIS: Two days later, she says she contemplated suicide writing, “I just wanted it all to be over. Part of my brain was saying, ‘Stop it. This is stupid. You're not going to do it.’ But I felt like I was out of my body like it was moving without me.” But she says when she thought about her family and supporters she paused. “I thought about the Girl Scouts whose troops I'd visited who told me they wanted grow up to be like me and I realized I couldn't do it. I have to keep going forward and be part of the fight to create the change that those young girls are counting on.  Hill says the following day she wrote her final speech and then put on her red battle uniform and war paint to call out what she calls a double standard in Washington.”

HILL: I no longer want to be used as a bargaining chip. I'm leaving because I didn't want to be peddled by papers and blogs and websites used by shameless operatives for the dirtiest gutter politics that I've ever seen.

DAVIS: But while her future may seem uncertain, Hill now says, “I'm in the fight and I'm glad it's not all over after all.”

HILL: We will rise and we will make tomorrow better than today. Thank you and I yield the balance of my time for now but not forever.

DAVIS: Before the scandal broke Hill’s  political career was on an upswing but says her marriage wag falling apart even well before her campaign for office and says that she believes her husband was behind the nude photo leak. He has not commented publicly on this. Doesn't seem like we've heard the last from Hill yet.

ROBERTS: I don't think so.