All three networks on Monday hailed the “surging,” “exciting” Pete Buttigieg’s “major moment” in Iowa polls. But they avoided a racial blunder by the 2020 candidate, as well as the fact that his polling with African Americans in the critical primary state of South Carolina is at an astonishing 0 percent. The Buttigieg campaign attempted to tout the Democrat’s Douglass Plan (as in Frederick Douglass) and released photos of people one would assume are supporters. Except, as Ryan Grim, DC bureau chief of The Intercept discovered, some aren't. They also included a Kenyan woman (and thus not a Buttigieg voter). 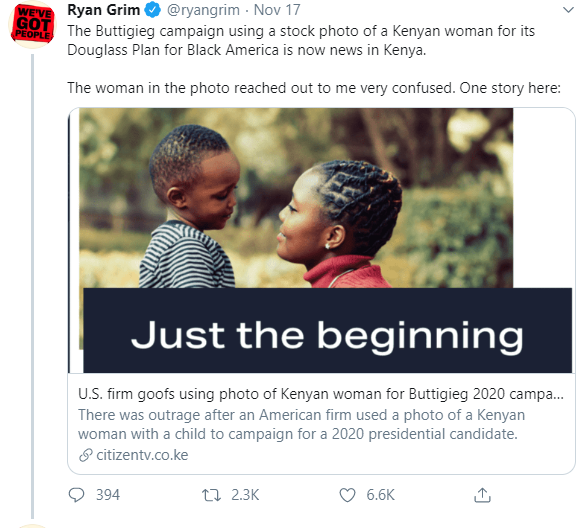 In his article, Grim wrote of other problems the campaign has run into. Speaking of the Douglass Plan, he explained that some of those listed as Buttigieg’s black supporters aren’t fans of the Democrat and others aren’t even African American.

Three days later, the Buttigieg campaign began promoting a list of 400 South Carolinian supporters of his Douglass Plan in emails to reporters and posts on social media.
...

Asked if she knew if any of the black supporters of the plan were also supporters of Buttigieg, [Tameika Devine] said she wasn’t sure. “The only ones I really knew were me and Rep. Thigpen,” she said. “I don’t know many — actually, now that I think about it, other than the folks working on Mayor Pete’s campaign, I don’t know of any local elected officials who have endorsed him yet.”

Aside from not supporting Buttigieg, many of the South Carolinian signees share another quality, as well: They’re not black.

The campaign hasn’t publicly claimed that every supporter of the plan listed is African American, though it wouldn’t be hard to draw that implication: It was published in the HBCU Times, and the bylines and top-listed supporters are all black. To be sure, a multiracial coalition would be needed to push the Douglass Plan through Congress, but the campaign didn’t say that, either.

The networks on Monday and Tuesday skipped these gaffes. It doesn’t take much imagination to figure out what would have happened if Donald Trump had done this. Also not mentioned? Buttigieg's very bad polling with African Americans in South Carolina, a number that wouldn’t likely improve with media coverage of the campaign’s unforced errors.

Instead, on Monday’s Today, Geoff Bennett hyped different polling: “This morning, a big Iowa boost for Mayor Pete Buttigieg, the Democratic presidential hopeful rocketing to the top of the latest Des Moines Register/CNN poll... Mayor Pete Buttigieg is having a major moment in Iowa.”

On CBS This Morning, Ed O’Keefe parroted praise for the “exciting” Democrat: “Mayor Pete has spent a lot of time and money in Iowa, and it's paying off. Iowa Democrats find Buttigieg exciting and down to Earth in our battleground tracker.” Good Morning America’s Linsey Davis cheered, “This morning, a major shakeup in the race for president as Mayor Pete Buttigieg skyrockets to the top in Iowa.”

In the past, CBS and other outlets have pushed the liberal Buttigieg as a “moderate.” So it’s not surprising they would ignore the bad news that African Americans don’t seem supportive of the Democrat.