The apparent cover-up at ABC News is accelerating. The network endured a bombshell revelation this week as investigative journalist James O’Keefe posted a hot mic video of host Amy Robach admitting that she had the Jeffrey Epstein pedophile story in 2016. But those in power stopped her from running it. ABC has refused to cover the startling news, instead focusing on finding and punishing the individual who leaked the story to O’Keefe.

On Thursday, New York magazine and HuffPost contributor Yashir Ali tweeted this update on the person in question —  now allegedly working at CBS —  she or he, reports from two sources, was FIRED by CBS. If a non-media corporation —  say a tobacco company —  fired a "whistleblower" like this, how would ABC and CBS report it? 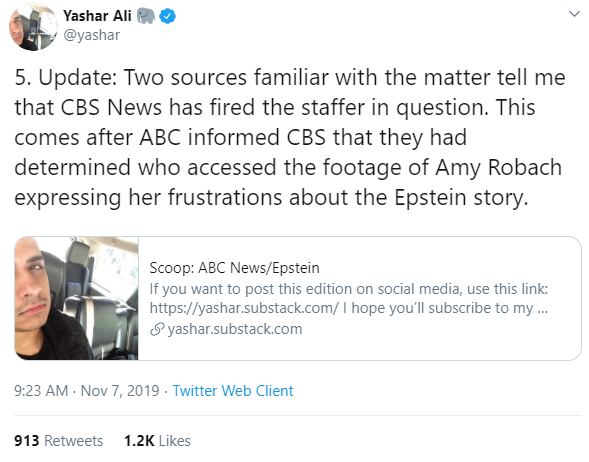 It seems as though ABC and CBS are now working together to thwart any additional information from coming out about what powerful journalists knew about Epstein. Here's what Ali wrote in an earlier newsletter about ABC's hunt for the source:

In a statement, a spokesperson for ABC News told me, “We take violations of company policy very seriously, and we’re pursuing all avenues to determine the source of the leak.”

All three networks have endured serious questions about how they handled sex abuse questions and stories on powerful men.

NBC ordered a “hard stop to reporting” on Harvey Weinstein. CBS, in addition to working to punish the Epstein leaker, employed accused sexual harasser Charlie Rose. Additionally, the nework minimized coverage of sexual assault charges against ex-Chairman Les Moonves. And now, ABC is hunting down the person who exposed their secrets.

As a reminder, a top journalist at ABC is George Stephanopoulos, a friend of Hillary Clinton and a man who worked for the Bill Clinton White House. In 2016, when ABC quashed reporting on Epstein, Mrs. Clinton was running for president. In the hot mic video, Robach stated that she “had” Bill Clinton.

What was that journalists have been saying about protecting whistleblowers and truth tellers?