Now that she’s resigning, all three networks on Monday covered the fall of Congresswoman Katie Hill, a Democratic “rising star” caught up in a weird sex scandal involving threesomes and a Nazi-era tattoo. MSNBC, which had been ignoring the controversy, also finally got around to it.

The married Hill allegedly had an inappropriate relationship with a congressional staffer (which she denies) and a campaign staffer (which she admits). CBS This Morning allowed the least amount of time, a scant 39 seconds out of a possible two hours. (Ironically, the show devoted 4 minutes and 6 seconds, in an unrelated segment on “open,” “non-monogamous partnerships.”)

Reporter Mary Bruce also used the “rising star” term for the imploding Democrat: “This is a dramatic turn for the rising Democratic star. Katie Hill was facing growing pressure and a House ethics investigation into these allegations that she had a sexual relationship with a member of her congressional staff which is a violation of the House rules.”

On NBC’s Today, echoing the wistful “what might have been tone," Today’s Geoff Bennett used the “rising star” moniker: “One seen as a rising star in the Democratic Party, Congresswoman Katie Hill now set to step down.”

CBS This Morning avoided from the phrase. Gayle King deemed the case “awkward”:  “Call this awkward! Always difficult when you say, ‘I did this, but I didn’t do that.’” Although the networks explained some of the weirdness of the case, they avoided the part about a Nazi-era tattoo and the bong. The California Globe explained:

Following the recent explosive story that Freshman Rep. Katie Hill (D-CA) had engaged in an improper “long-term sexual relationship with a female campaign staffer,” and that Hill and her husband, who are in divorce proceedings, were allegedly involved in a lengthy “throuple” relationship with the young staffer, DailyMail.com reported, “Shocking photographs of Democrat Katie Hill posing naked with a tattoo of what appears to be a Nazi-era Iron Cross on her bikini line while smoking a bong and making out with her young female aide.”

On October 24, CBS and NBC skipped developments of the Hill story. MSNBC avoided it last week as well before discovering it on October 28th.

VLADIMIR DUTHIERS: Congresswoman Katie Hill is stepping down amid allegations of improper relationships with staff members. The freshman Democrat has acknowledged an inappropriate relationship with a campaign staffer but she has denied allegations of a romantic relationship with a congressional aide. Last week, leaked explicit photos were published online. She blamed a smear campaign by her estranged husband. Hill said in a statement, quote, “Having personal photos weaponized against me has been an invasion of my privacy. It's also illegal, and we are currently pursuing all of our available legal options.”

GAYLE KING: Call this awkward! Always difficult when you say, “I did this, but I didn’t do that.”

DUTHIERS: We’ll see how it ends up. 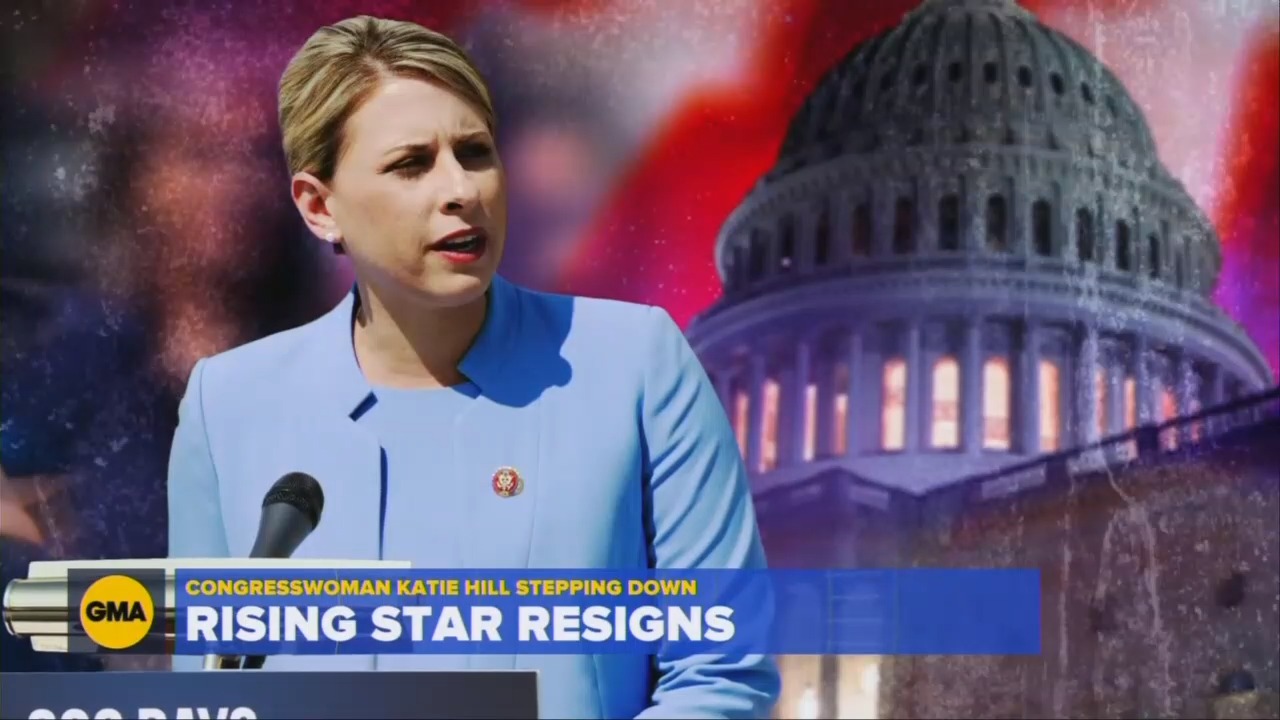 GEORGE STEPHANOPOULOS: Rising star resigns. Overnight, the freshman Democratic lawmaker, Katie Hill, accused of an inappropriate relationship with a staffer, steps down. The reaction this morning.

STEPHANOPOULOS: We're going to move on to Capitol Hill now and the resignation of freshman House Democrat Katie Hill. The congresswoman made the announcement overnight in the face of an ethics investigation into her relationship with a staffer amid a nasty divorce battle. Our Senior Congressional Correspondent Mary Bruce has the details. Good morning, Mary.

MARY BRUCE: Good morning, George. Well, this is a dramatic turn for the rising Democratic star. Katie Hill was facing growing pressure and a House ethics investigation into these allegations that she had a sexual relationship with a member of her congressional staff which is a violation of the House rules. Now Congresswoman Hill denied those allegations but she did admit to and apologize for having a sexual relationship with a member of her campaign staff. Now, that's not against the rules but Hill did admit that it is inappropriate. Hill, as you mentioned, is in the middle of a bitter, nasty divorce battle. She says her husband is abusive and is accusing him of running a, quote, “smear campaign” against her by leaking nude photos of her and this staffer which were circulated without her consent. This Morning Hill says that stepping down is the hardest thing she's ever had to do but ultimately the best thing for her constituents and the country.

CRAIG MELVIN: California Congresswoman Katie Hill announcing she will resign after explosive allegations that she had affairs with members of her staff. NBC’s Geoff Bennett joins us from Capitol Hill with details on this one. Hey, Geoff.

GEOFF BENNETT: Hey, Craig. Good morning. It's a dramatic downfall for freshman lawmaker Katie Hill. The California Democrat had leadership positions in both House leadership and on the powerful House Oversight Committee. But weeks of reports about her personal life and an allegation of an improper relationship with a staffer in the end-all proved to be too much.

KATIE HILL: We have done everything we can to pass the bills.

BENNETT: One seen as a rising star in the Democratic Party, Congresswoman Katie Hill now set to step down. The freshman lawmaker making the announcement in a letter that reads in part, “It's with a broken heart I announce my resignation from Congress. This is the hardest thing I have ever had to do, but I believe it's the best thing for my constituents, my community and our country.” It comes after that House Ethics Committee said it would look into allegations that Hill had a sexual relationship with one of her staffers. Hill denies the claim, but admits she did have a relationship with a female member of her campaign. Hill, who openly identifies as bisexual, called it consensual but inappropriate.

This week, that relationship provided fodder for the tabloid pictures when nude pictures of Hill and the campaign staffer were published online. Hill is going through a bitter divorce and in that emotional letter blamed who she called her abusive husband and hateful political operatives for the leaks. Adding, “Having personal photos of personal moments weaponized against me has been an invasion of my privacy.” Her husband's attorney did not respond to our request for comment. Hill also apologized to those she is hurt, writing, “I am not a perfect person and never pretended to be.” Katie Hill was elected to Congress as part of the blue wave, and making a name for herself as vice chair of the powerful chair of the powerful House Oversight Committee. She now has the distinction of being the first female member of Congress to resign in the Me Too era. Now, House Speaker Nancy Pelosi in a statement said, “Hill has made a great contribution as a leader of the freshman class.” But, she added, “She has acknowledged errors in judgment that made her continue service as a member untenable.” It will now be up to California’s governor to call for a special election to ultimately fill Katie Hill’s seat. Craig?