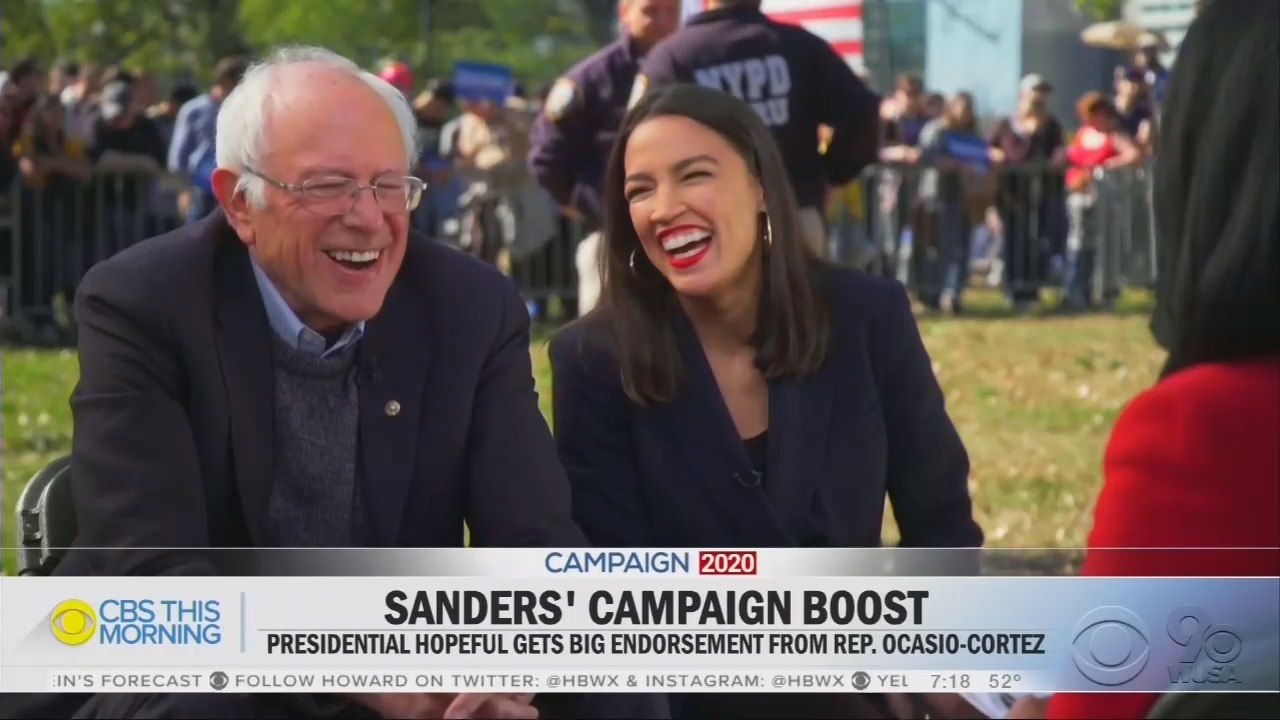 How excited are CBS journalists about the combination of socialist Bernie Sanders and socialist Alexandria Ocasio-Cortez? So thrilled that they didn’t bother to check the Constitution. Or even Wikipedia. CBS This Morning journalist Nikole Killion on Monday conducted a joint interview with the two far-left politicians.

She asked Sanders, who just secured Ocasio-Cortez's endorsement, “If you are the nominee, Senator, would you consider the Congresswoman as your running mate?” The 2020 Democrat looked confused and even Ocasio-Cortez noted, “I think I’m too young for that.”

If Killion had read her Constitution, she’d know that that Ocasio-Cortez is ineligible to become President until 2024.

After the gaffe, Killion gamely moved on, perhaps eyeing Ocasio-Cortez as Secretary of State or the Treasury: “Would you work in a Sanders administration, a Sanders White House?” Proving that everything is about race and gender, she demanded to know: “As a woman of color, why back an old, white guy? And is this the future of the party?”

None of this is surprising though. CBS is the same network that failed to object when Ocasio-Cortez compared herself to Lincoln and FDR.

GAYLE KING: Senator Bernie Sanders is getting a major boost to his presidential campaign after his heart attack nearly three weeks ago. The prominent left-wing Congresswoman, that’s Alexandria Ocasio-Cortez, endorsed him in front of more than 25,000 people at a weekend rally in New York City. That's the largest rally for any Democratic candidate so far. CBS News's Nikole Killion spoke with them in their first joint network interview right after that announcement. Ocasio-Cortez explained her endorsement and Sanders addressed his health problems.

NIKOLE KILLION: What do you say to people who look at what happened with regard to your heart attack look at the fact that you're the oldest candidate in the race, and wonder if you have the stamina for four years in office?

SENATOR BERNIE SANDERS: What I say is you look at the totality of a candidate. This is based on 30 or 40 years of fighting for the working families of this country. That's my record.

KILLION: Congresswoman, I know when the senator was in the hospital in Nevada you called him.

CONGRESSWOMAN ALEXANDRIA OCASIO-CORTEZ: I did. Yeah.

KILLION: Is that when you offered your endorsement?

KILLION: Why in that moment?

OCASIO-CORTEZ: I think it was a gut check for me. You know, it was a real gut check, and it's saying —  and by the way, neither me nor the Senator cannot [sic] do this by ourselves.

KILLION: As a woman of color, why back an old, white guy? And is this the future of the party?

OCASIO-CORTEZ: I'm actually very excited about this partnership because it shows what we have to do in our country is that we have to come together across race, across gender, across generation.

KILLION: Did you meet with other candidates before making your decision?

OCASIO-CORTEZ: I did. Yes.

OCASIO-CORTEZ: You know, I think she's a fabulous candidate. And so frankly, Senator Sanders, Senator Warren, and myself are all the same team in the party.

KILLION: If you are the nominee, Senator, would you consider the congresswoman as your running mate?

OCASIO-CORTEZ: I think I'm too young for that.

SANDERS: There you go. She's answered it.

KILLION: Would you work in a Sanders administration, a Sanders White House?

SANDERS: Yes, you would.

OCASIO-CORTEZ: Well, I know I guess I know you'll ask.

KING: All right, Nikole Killion. I mean, the question that will stick with me —

KING: As a woman of color —

KING: Why endorse an old white guy. She said with a straight face and they answered the question. All right. Warren said after the endorsement that she is a fan of the Congresswoman and eventually they will all be on the same side. One of the other members of the so-called squad of freshman Democrats is Congresswoman Ilhan Omar, has also endorsed Bernie Sanders.