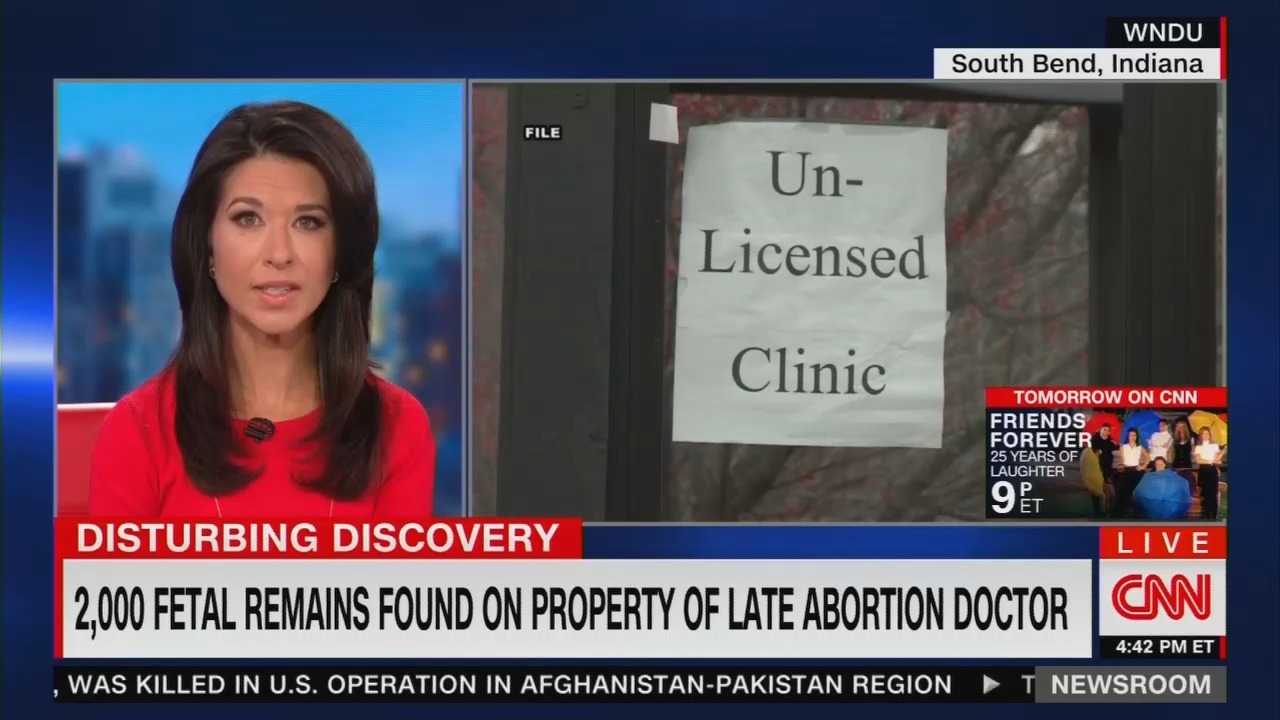 The “stunning and horrifying” discovery of over 2000 aborted babies in the home of a now-dead abortionist has drawn just scant coverage on the cable channels and nothing on the networks. The New York Times reported on the grisly finding, but relegated Dr. Ulrich Klopfer to page A-22 of the paper. The headline blandly explained, “More Than 2,200 Preserved Fetuses Found at Property of Dead Doctor, Officials Say.”

CNN’s Ana Cabrera seemed appalled as she reported on the “grisly discovery.” But the network allowed just a scant 36 seconds. She explained, “A stunning and horrifying discovery in Indiana. The family of a doctor who operated an abortion clinic before his death found more than 2,000 medically preserved fetal remains on his property.” She added, “He died earlier this month and relatives made this grisly discovery on Thursday while going through his property.”

In addition to the mention on CNN, Fox News has covered the story (on Fox and Friends, Fox News at Night and Tucker Carlson), as well as Fusion’s U News and OAN’s Tipping Point. The lack of media coverage is all the more stark considering that this happened in the vicinity of a 2020 Democratic presidential candidate. Doctor Klopfer’s clinic was in South Bend, Indiana. 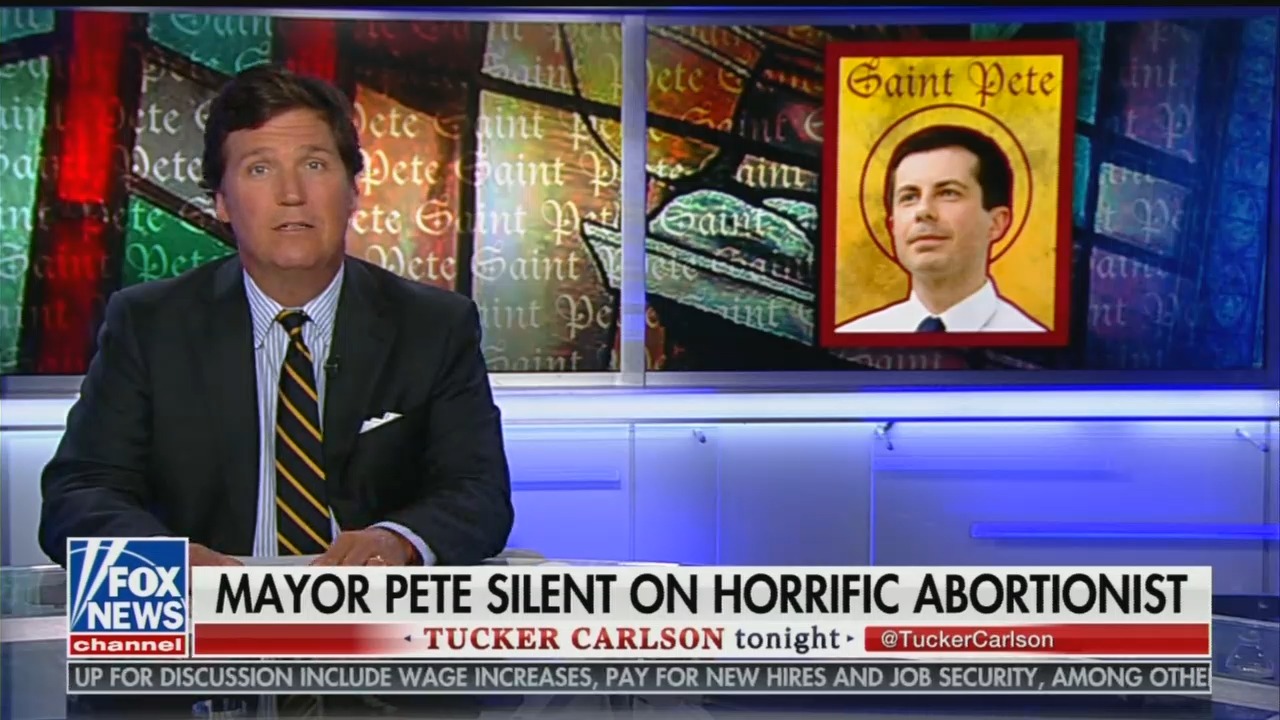 On Tipping Point, Monday, Live Action President Lila Rose noted, “This is in Mayor Pete's backyard, presidential hopeful Pete Buttigieg’s backyard. This is his hometown where he was mayor.”

Host Liz Wheeler condemned the journalistic lack of interest: “I think the bias from the media is obvious here. Because if this was a situation where an employee at a morgue who hoarded 2246 bodies of dead people in his home this would be national headlines. Everybody would be reading about this grisly, shocking story.”

The New York Times write-up, by Derrick Bryson Taylor, waited until paragraph 12 (of a 15 paragraph story), to mention that Klopfer once performed an abortion on a 10-year-old girl. Not in the story was this point mentioned on Heavy.com:

In a 2014 case brought against Klopfer in South Bend by the St. Joseph County Prosecutor’s Office, it was alleged that he performed an abortion on a 13-year-old girl and did not report it for six months. The case was dismissed after he went through a court diversionary program.

In 2011, the disturbing case of abortionist Kermit Gosnell simiarly was downplayed by journalists. The Media Research Center’s Brent Bozell and Tim Graham wrote in 2017:

Back in 2011, the Philadelphia Inquirer published the story on Gosnell’s workplace and it was chilling: "Semiconscious, moaning women sat in dirty recliners and on bloodstained blankets. The air reeked of urine from the flea-infested cats permitted to roam the clinic. There was blood on the floor and cat feces on the stairs."

How could this happen? The national media were barely curious. CBS Evening News offered one story, NBC's Today managed 50 vague words and ABC was AWOL. Rachel Maddow anchored an entire hour-long special on the shooting death of Kansas abortionist George Tiller, but a Nexis search at that time found not she, nor anyone else on MSNBC could locate the name Kermit Gosnell.

ANA CABRERA: A stunning and horrifying discovery in Indiana. The family of a doctor who operated an abortion clinic before his death found more than 2,000 medically preserved fetal remains on his property. Doctor Ulrich Klopfer ran a women's health facility in South Bend, Indiana before his license was suspended in 2015. He died earlier this month and relatives made this grisly discovery on Thursday while going through his property. Police say there's no evidence that any medical procedures were conducted at the doctor's house. Investigators say the family is cooperating with their investigation.

LIZ WHEELER: Our media madness story. It looks like the Kermit Gosnell case all over again. The remains of 2,246 aborted babies were found in the home of recently deceased South Bend, Indiana abortionist Ulrich Klopfer. Ulrich's family discovered the remains of the babies after sorting through the abortionist's property after his death on Sept 3rd. This is not the first shocking controversy surrounding this man. Klopfer's medical license was suspended in 2015 after failing to report abortions performed on a 13-year-old child to authorities and failing to provide counseling information to patients undergoing abortion procedures. But this is a shocking news story, so why is the mainstream media ignoring it then? With me now, founder of Live Action Lila Rose. Lila, good to see you.

LILA ROSE: Good to see you too, Liz.

Wheeler: Lila, I don’t even know the word for this. This is like the house of horrors Kermit all over again. 2246 aborted babies at his house. What were they even doing at his house?

ROSE: We don’t know yet. None of the media reports explain why this abortionist was actually hording the bodies of his victims, these over 2000 little children. Who, instead of given a decent burial are now in his house of horrors. It’s a home of horrors. But listen, this is in Mayor Pete's backyard, presidential hopeful Pete Buttigieg’s backyard. This is his hometown where he was mayor, where he is mayor. We have abortionists not just killing children but taking the bodies and stacking them in their homes, it goes to show what has happened in this country because of abortion on demand. We allow the killing of children. We have no respect for their bodies after death. And people like presidential hopeful Mayor Pete are protecting abortionists like Ulrich.
...

WHEELER: Right. I think the bias from the media is obvious here. Because if this was a situation where an employee at a morgue who hoarded 2246 bodies of dead people in his home this would be national headlines. Everybody would be reading about this grisly, shocking story. Any time there's a killing, if there's a serial killer it's headline everywhere in the nation. And yet, because it’s abortion, because its victims were unborn babies, because this is sacred cow territory, we hear nothing about this story. Nothing whatsoever. At what point do even people who support abortion say, “Wow, this is disgusting. This is sick.” And if the abortion industry and lobby is okay with covering this up then maybe there’s a problem with the abortion industry and the abortion lobby.

ROSE: Yes, exactly. Most states like Indiana have hardly none or none at all laws to govern the removal or disposal of babies after they've been aborted. Once you have laws to treat them they're human bodies that treat them like human beings after death, that these are human bodies, all of a sudden it calls into question the fact that they are being legally killed in the first place.