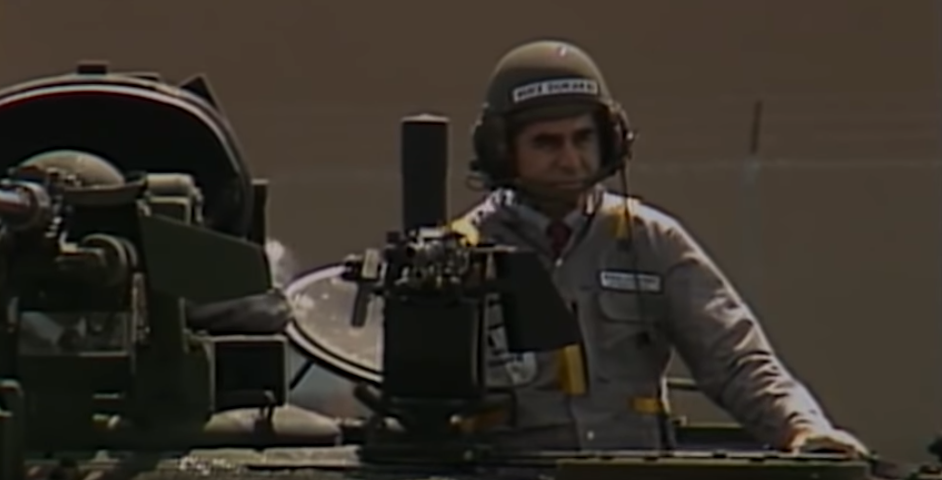 It was 31 years ago this week that the Michael Dukakis for President campaign made a disastrous campaign appearance. It was so bad that it ended up in an ad for his opponent, George H.W. Bush. But, of course, that didn’t stop some in the media for rushing to the defense of the Democrat, crying foul on behalf of the candidate. Some things never change.

On September 13, 1988, Dukakis appeared at a General Dynamics facility in Sterling Heights, Michigan. As Politico reported in 2013, he would ride in a 68-ton M1A1 Abrams Main Battle Tank. Campaign operative Josh King explained in Politico, “The visit, meant to bolster the candidate’s credibility as a future commander-in-chief, would go down as one of the worst campaign backfires in history.”

As you can guess, the event didn’t go well. Many thought the Democrat looked silly as he rode back and forth in the tank, trying to bolster his credibility. In October, the Bush campaign ran an ad attacking Dukakis and using the footage of him riding around in a tank. On the October 19, 1988 edition of World News Tonight, reporter Richard Threlkeld jumped to defend the liberal candidate. The November 1988 MediaWatch explained:

On October 19 ABC rushed Richard Threlkeld onto World News Tonight to correct all the alleged errors in an anti-Dukakis spot best known as the "tank" ad. Over video of a tie-clad Dukakis riding in a tank, the Bush ad began: "Michael Dukakis has opposed virtually every defense system we developed." Threlkeld countered: "In fact, he supports a range of new weapons, including the Trident II missile." The commercial continued: "He opposed four missile systems, including the Pershing Two missile deployment." Not so, "Dukakis opposes not four systems, but two, as expensive and impractical, and never opposed Pershing Two," Threlkeld charged. "Dukakis opposed the Stealth bomber," the announcer asserted. "In fact," Threlkeld insisted, "Dukakis has supported the Stealth bomber."

So who was telling the truth? A week later NBC's Lisa Myers referred to a Bush press conference where "the campaign provided quotations from Dukakis to show he once opposed all those weapon systems as the ad states." Did ABC balance the Threlkeld story by citing this documentation? No, viewers received just this vague reference from reporter Brit Hume: "The Bush campaign sent out a team Bush spokesmen to display what they claimed was documentation for all of Bush's TV ads."

Here's some of the 1988 reporting from the Media Research Center archives:

Liberal World News Tonight anchor Peter Jennings opened the October 19 segment with Democratic talking points: “Well, the Dukakis campaign obviously says dirty pool and it's also raising a ruckus about the latest Bush television ad.” After citing one scant example of a false charge against Bush, Threlkeld complained about attack ads in general. It's not hard to imagine which campaign he was angry with:

If the government ever gets around to putting a warning label on TV campaign commercials the way they do on cigarettes maybe it ought to read something like this. If in the heat you're tempted to buy something one guy says about the other guy in his TV ads, caveat emptor, buyer beware. Richard Threlkeld, ABC News, New York.

When it comes to the liberal media and their defense of Democrats, some things never change.

A transcript of the October 19, 1988 World News Tonight is below:

PETER JENNINGS: Well, the Dukakis campaign obviously says dirty pool and it's also raising a ruckus about the latest Bush television ad. The one attacking his stand on defense. We asked ABC's Dick Threlkeld to take a look not only at that but some of Mr. Dukakis' own commercials as well to see how accurately they portray one another.

LLOYD BENTSEN: I think it's an outrage. I'm looking at the latest one that has just happened and it's called the tank script, and that one says that Mike Dukakis opposed virtually every defense system we've developed. That's absolutely untrue. Here's what he's complaining about. The Bush campaign seizing on a Dukakis photo opportunity to trash what they say is Dukakis' record on defense.

THRELKELD: In fact, he supports a range of new weapons including the Trident II missile.

THRELKELD: In fact, Dukakis would ban those weapons only if the Soviets did the same. The same principle incorporated in the INF treaty which George Bush supports.

THRELKELD: In fact, Dukakis has supported the Stealth bomber. While this commercial is an especially glaring example of how to fiddle with your opponent's record for your own benefit, it's only fair to note the Democrats haven't been above doing it to George Bush.

THRELKELD: Nope, not to cut but to freeze benefits. If the government ever gets around to putting a warning label on TV campaign commercials the way they do on cigarettes maybe it ought to readsomething like this. If in the heat you're tempted to buy something one guy says about the other guy in his TV ads, caveat emptor, buyer beware. Richard Threlkeld, ABC News, New York.