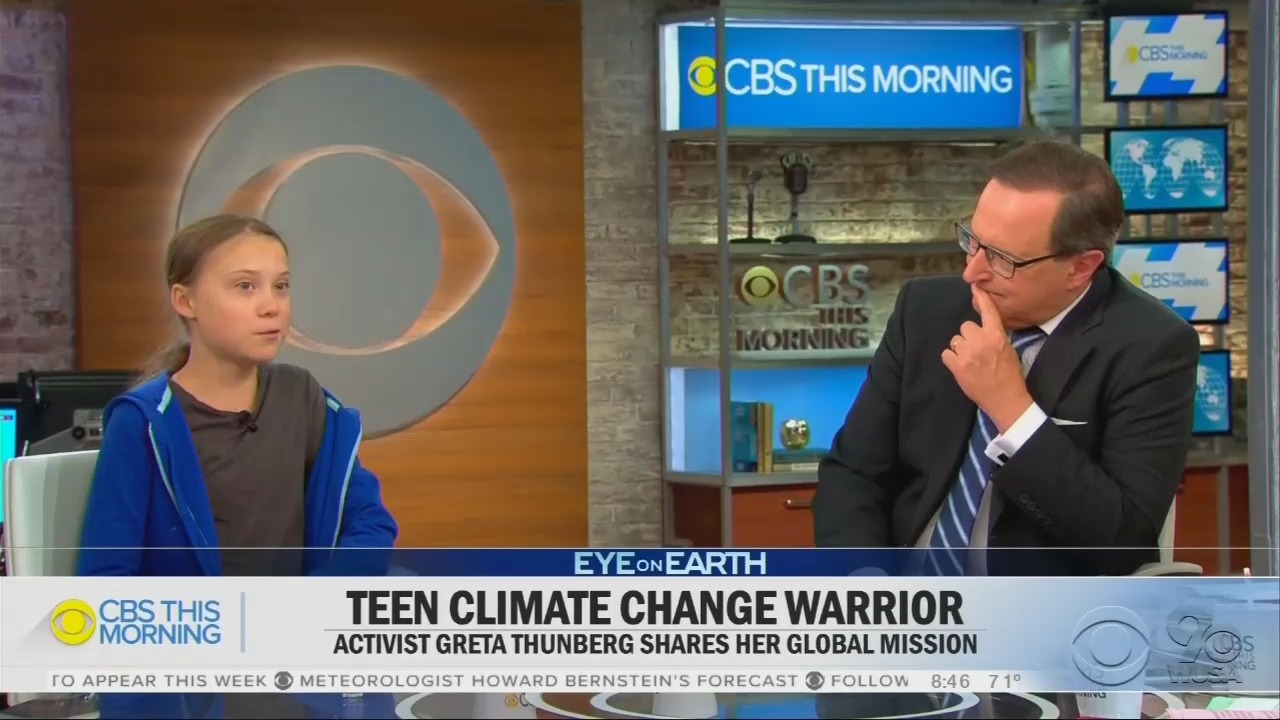 CBS This Morning co-hosts on Tuesday promoted the “panic” agenda of a teenage “climate warrior.” The journalists endorsed the Swedish girl’s call to “push” world leaders up “against the wall,” an awkward call given Europe’s history of political violence. For the third time since August, CBS touted Greta Thunberg, a 16-year-old who conducted a school strike over global warming and then took a “zero emissions” yacht to the United States.

Teasing the segment, Tony Dokoupil called for panic: “Ahead, 16-year-old Greta Thunberg will be here with why she believes world leaders should panic over climate change.” Talking to the young girl, he again pushed the meltdown response to global warming: “Your message to world leaders is that it’s time to panic and you want them to panic. What do you hope happens next?”

Recounting off-air conversations, co-host Anthony Mason repeated, “You said to us a moment ago you want to push [world leaders] against the wall.” Perhaps because this sounds extreme and possibly violent, co-host Gayle King tried to clarify: “To shame them, you said.” 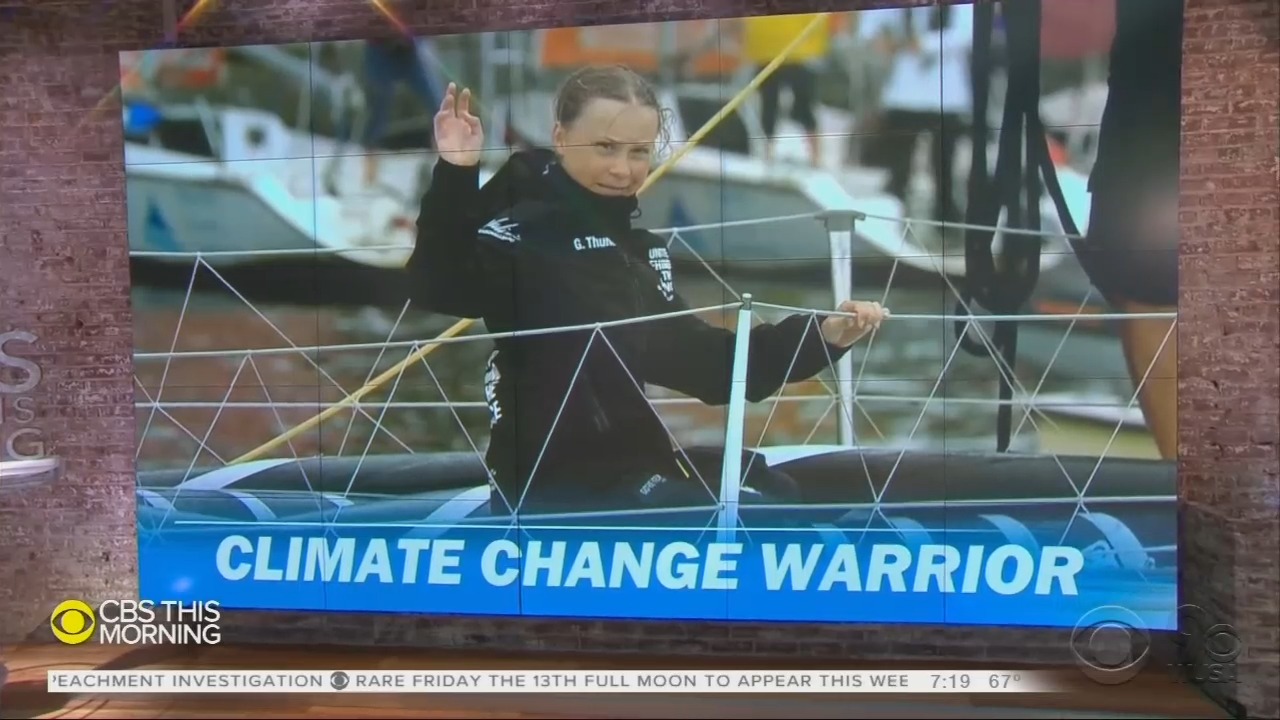 Dokoupil gushed, “And now you have millions of kids around the world following you. What's it been like to watch that change?” At no time did any of the hosts ask any tough questions. Although they insisted that Thunberg’s yacht to America was “zero emissions,” the journalists failed to note that two individuals were flown to America to retrieve the boat. Kind of defeats the purpose, doesn’t it?

On August 29, CBS and NBC hailed the teen, saying they were “smitten” with the “climate crusader.” Today co-host Craig Melvin cheered, “Go, Greta, go!” On August 28, CBS This Morning touted Thunberg as the “voice of the planet.”

At no time, then or now, did CBS not her extreme positions, including that eating meat is “stealing her generation’s future” and will lead to a climate apocalypse. Additionally, the teenager has touted “flygskam” or flight shaming for anyone who dares use an airplane regularly.

TONY DOKOUPIL: Plus, Plus, 16-year-old activist Greta Thunberg tells us why she's so passionate about climate challenge.

ANTHONY MASON: Ahead, teenager Greta Thunberg who's a climate activist and the attention she's getting around the world, she'll be here.

DOKOUPIL: Ahead, 16-year-old Greta Thunberg will be here with why she believes world leaders should panic over climate change.

DOKOUPIL: In this morning's "Eye on Earth" 16-year-old climate activist Greta Thunberg joins us for her first live TV U.S. television interview. The teenager made headlines last year with her solitary strike against climate change outside Sweden’s parliament. She's inspired millions of supporters to rally in more than 150 countries. Greta recently sailed across the Atlantic Ocean in a zero emissions yacht. She'll be here in New York speaking at the national climate actions summit later this month. And Greta joins us at the table. Greta, good morning.

DOKOUPIL: Glad you made it on the boat.

GAYLE KING: Glad you made it.

DOKOUPIL: Your message to world leaders is that it’s time to panic and you want them to panic. What do you hope happens next?

THUNBERG: I mean, of course, by panic, I don't mean literally panic, but that we, and especially they, step out of their comfort zone because the planet is outside of its comfort zone and we need to be outside of our comfort zone to prevent the worst consequences from happening. And what I want people to do now is to become aware of the crisis that is here. I tell the world leaders when I speak to them. I tell them how it is, how I —  I tell them the science and how it looks like.

DOKOUPIL: What do they say?

MASON: You said to us a moment ago you want to push them against the wall.

KING: To shame them, you said.

THUNBERG: Those who need shaming. It's what I have been doing for quite a while now and it actually has a lot of impact when you speak, like, truth to power, when you don't bother to be polite because this is such a serious crisis, and you cannot —  we cannot focus on what we can or cannot say. We must speak clearly about what is happening.

MASON: I'm wondering, Greta, what gave you the confidence to do that?

KING: That's what I was wondering too. Yeah.

THUNBERG: I don't know. I just know what is right and I want to do what is right. And I want to make sure I have done everything in my power to stop this crisis from happening, to prevent it, and that's —  and that I have promised myself that I will do everything I can, and that is what I'm trying to do. Also I have —  I have Asperger's. I’m on the autism spectrum, so I don't really care about social codes in that way.

KING: In fact, you called your Asperger's, you call it a super power, a gift. What do you mean by that?

DOKOUPIL: This began as a one-kid hunger strike in Sweden.

THUNBERG: Not a hunger strike.

DOKOUPIL: School strike. Even better. And now you have millions of kids around the world following you. What's it been like to watch that change?

THUNBERG: It's been very surreal because I think no one could have predicted that and least of all me, so it has just been an adventure seeing all of these things that have been happening. And to see all of these millions of children school striking for the climate, demanding a future, saying “Why should we study for a future that is being taken away from us” when we're not doing anything to stop that.

KING: What's the one thing we could do today, Greta, all of us who are listening to you?

THUNBERG: I think the most important thing to do right now is toe try to understand the crisis is to grasp the problem because I think that once you fully understand the climate and the ecological emergencies, then you know what you can do as well. And, of course, there's a lot of things you can do in your everyday life, but we cannot be focusing on these individual things you do. We have to see the full picture.

MASON: All right, Greta. Forgive me for interrupting you. We have to go. Thank you so much for joining us this morning.

KING: And you walked here, we should tell people. She walked here this morning.