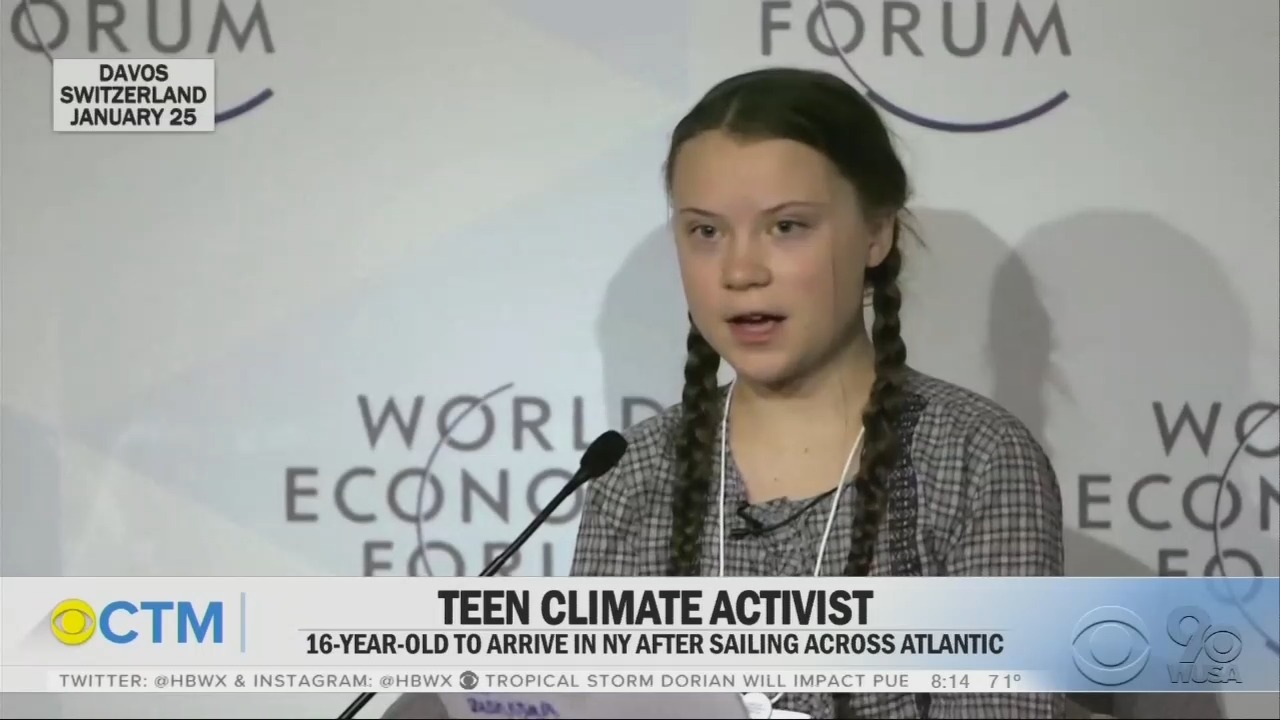 CBS This Morning on Wednesday promoted the agenda of a Swedish teenage “climate activist” who took a yacht to New York for a United Nations climate change summit. Sixteen-year-old Greta Thunberg chose this route in order to have zero carbon emissions during her visit. Reporter Meg Oliver touted the young woman's “climate change movement” and her year-long strike: “Soon students from across the world began walking out of school, too, demanding action from their governments.”

Oliver hailed, “Thunberg became the unlikely leader of a global youth movement who call her the voice of the planet.” Though the report spun Thunberg as an inspiring teen doing good work, it ignored the extreme nature of her views. Thunberg thinks that eating meat is “stealing her generation’s future” and will lead to a climate apocalypse.

Additionally, the teenager has touted “flygskam” or flight shaming for anyone who dares use an airplane regularly. Of course, CBS didn’t highlight her broad opposition to flying in general. Instead, Gayle King praised:

I love this little girl. She's so unapologetic. I saw her speak in Stockholm. She had the whole room mesmerized before she even opened her mouth. She's amazing and so committed at such a young age.

Back in August, This Morning co-host Anthony Mason previewed Thunberg’s boat trip to America similarly hyperbolic language: “A teenager from Sweden called ‘the voice of the planet’ is ready to cross the Atlantic on a mission to fight climate change....She’ll be sailing from Europe to New York to call on world leaders to protect the environment.

King didn’t mention if she took a boat to and from Stockholm or if she (gasp) flew.

UPDATE: It turns out that Thunberg’s “zero carbon” yacht won’t save any carbon emissions. A crew will be flying it to New York to sail it back.

TONY DOKOUPIL:  A teenage activist sailing across the Atlantic to highlight climate change has almost arrived in new York. Greta Thunberg set sail from England two weeks ago aboard a zero emissions yacht. The 16-year-old will attend two climate change summits at the United Nations and she wants to raise awareness about environmental issues. Meg Oliver is in lower Manhattan awaiting her arrival. Meg, why did Thunberg choose to sail all the way to New York?

MEG OLIVER: That's a long way, isn't it, Tony? Good morning. Thunberg refused to fly here because of the carbon footprint of traveling by plane. Instead, she chose to sail nearly 3,000 miles. Earlier this morning, she tweeted she could see the lights of New York but won't actually touch shore until later this afternoon. A flight to New York would have taken just eight hours, but Greta Thunberg wanted to prove a point on her two-week journey across the ocean.

GRETA THUNBERG (climate activist): What I'm concerned about is whether we'll do something or not, whether the people will react and act with necessary force.

OLIVER: Gail-force winds meant it wasn't plain sailing to get here. The 60 foot racing yacht, powered by underwater turbines and solar panels was hit by heavy seas, but made it across the Atlantic with a zero emissions carbon footprint.

THUNBERG: We're about 300 miles away from Nova Scotia. It's very rough with very high waves.

OLIVER: Conditions onboard were no better with no showers and little privacy, but that didn't stop Thunberg celebrating the one-year anniversary of the start of  her climate change movement. She began striking alone outside the Swedish Parliament last August. Soon students from across the world began walking out of school, too, demanding action from their governments. Thunberg became the unlikely leader of a global youth movement who call her the voice of the planet.

THUNBERG: I wanted to act as if the house was on fire because it is.

OLIVER: Earlier this month she told CBS News that it's time to see if leaders in the U.S. and globally are really listening.

THUNBERG: They say they listen to us and now it's up to them to prove that they have listened.

OLIVER: While she's here, Thunberg will attend two global climate strikes and those U.N. meetings. As for a plan on how she plans to return home, Adriana, that's unclear at this point.

GAYLE KING: That's a very good question. I love this little girl. She's so unapologetic. I saw her speak in Stockholm. She had the whole room mesmerized before she even opened her mouth. She's amazing and so committed at such a young age.