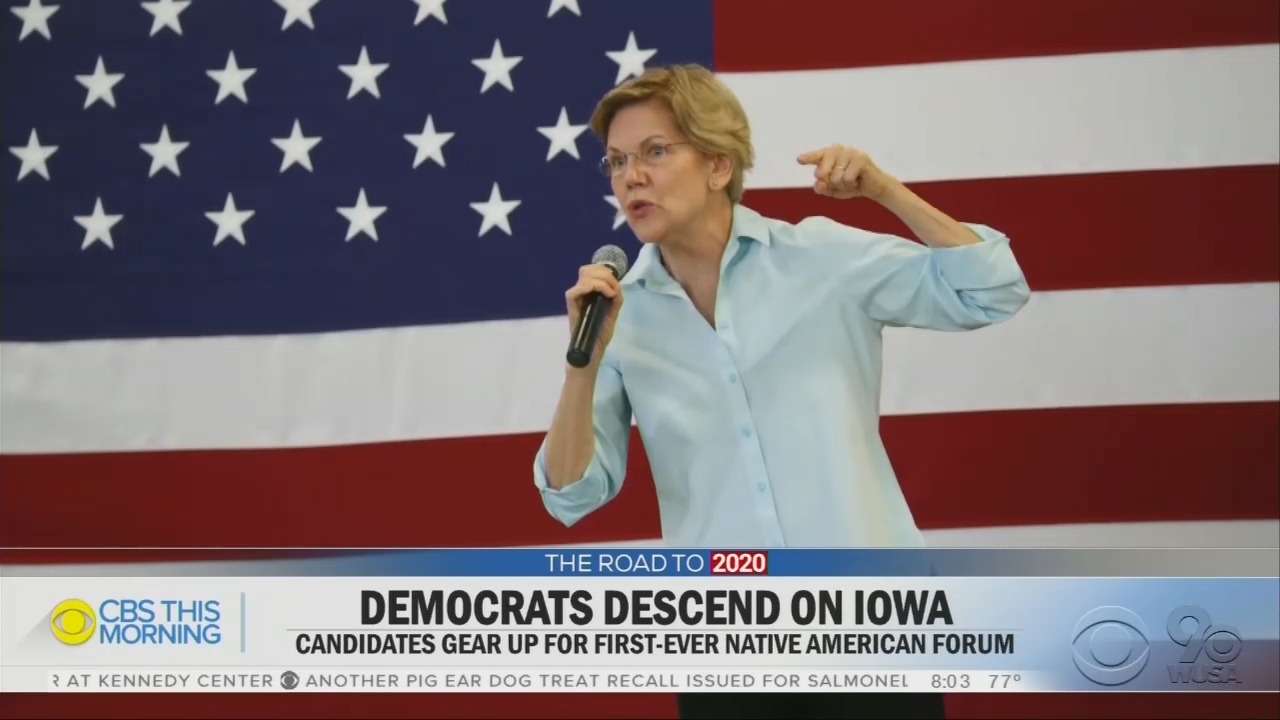 CBS This Morning journalists on Monday attempted to downplay Elizabeth Warren’s repeated efforts to pass herself off as a Native American, calling it a “flap” and insisting that many think it’s “much ado about nothing.”

Warren appeared at a Native American forum on Monday in Iowa. This is the same woman who tried to be seen as a Cherokee and who contributed to the cookbook Pow Wow Chow. CBS reporter Ed O’Keefe gently reminded, “You’ll remember she faced backlash last year for releasing a DNA test revealing that she has a very small trace of Native American ancestry.”

“Very small” is a generous way of putting it because she’s actually 1/1024 Native American. O’Keefe then assisted the 2020 Democrat in dismissing the controversy: “Voters and Native American activists we’ve spoken to say that DNA flap is much ado about nothing, even though, of course, the President occasionally makes light of it.”

The CBS story looks even worse in retrospect. At the Iowa event on Monday, Warren apologized for pretending to be a Native American in a way that she hasn’t before:

"I know that I have made mistakes. I am sorry for harm I have caused," Warren said. "I have listened and I have learned a lot, and I am grateful for the many conversations that we've had together. It is a great honor to partner with Indian country."

And confronting a sore subject, as Elizabeth Warren continues to rise in the polls, she's joining a few of her Democratic rivals at an event geared toward native American voters.... Are voters ready to forget the controversy over her DNA test and heritage?

Reporter Ali Vitali called it “the DNA test dust up.”

But if you look at how her campaign began it was really this issue, the DNA test dust-up, if you will, that marred the early weeks of her candidacy and, sort of, allowed people to question, would she be able to go head to head with Donald Trump? And has she sufficiently spoken to this issue of the way in which she's dealt with her native American ancestry?

TONY DOKOUPIL: This morning, our Road to 2020 series takes us back to Iowa where more than two-thirds of the Democrats running for president are courting the Native American vote this week. Ed O’Keefe is in Sioux City, Iowa where those 2020 candidates are gearing up for a two day forum. A forum, Ed. What’s that going to be like?

ED O’KEEFE: Well, Tony, this is a first of its kind event, focused exclusively on Native American issues. As you said, over the next two days, Native American leaders will quiz the candidates on issues of concern to native communities. Eight of the 23 Democratic presidential candidates will be here. And the one to watch, especially, is Massachusetts Senator Elizabeth Warren. You’ll remember she faced backlash last year for releasing a DNA test revealing that she has a very small trace of Native American ancestry. Polls show she is in second place he in Iowa. And voters and Native American activists we’ve spoken to say that DNA flap is much ado about nothing, even though, of course, the President occasionally makes light of it.

Now, Native American activists say even a slight increase in the turnout of 5.2 million native Americans across the country, could help tip the scales in swing states next year like Arizona, Michigan and North Carolina. While much of the focus from Democratic presidential candidates these days is here in Iowa and New Hampshire, states with predominantly white voters, on Friday, several of them were at a forum in Atlanta with black church leaders. And Four of them went to South Carolina, the primary state with the largest block of African-American voters. Gayle?