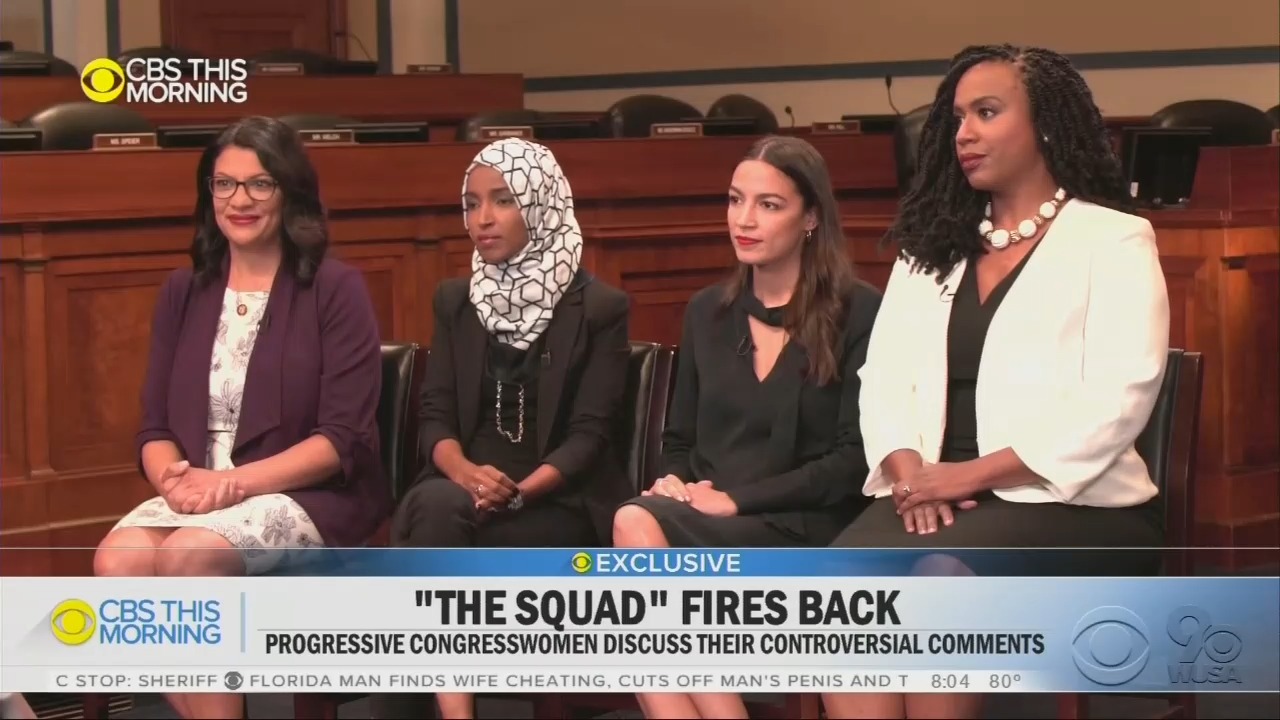 Liberal CBS This Morning co-host Gayle King on Wednesday gushed over the “impressive,” “passionate,” “committed” “squad” of far-left Democratic Congresswomen: Rashida Talib, Ilhan Omar, Alexandria Ocasio-Cortez and Ayanna Pressley. In an exclusive interview, she encouraged them to explain what it was like to be attacked by Donald Trump. But then something unusual happened: King repeatedly pressed Omar about her anti-Semitic attacks against Jews and Israel.

King explained to viewers, “We also asked Congresswoman Ilhan Omar about her past comments suggesting some politicians support for Israel is motivated by money. Lawmakers on both sides of the aisle denounced those comments as anti-Semitic.”

While King should be complimented for actually raising the issue of Omar’s attacks on Jews, she didn’t explain WHAT the comments were. The Democrat in 2012 referred to Israel as “evil” and said the country “hypnotized the world.” In February of 2019, Omar promoted anti-Jewish tropes about controlling money, by saying of Israel, “It's all about the Benjamins baby.”

It would have helped if King explained more of the comments.

Earlier, King gushed about how impressive the four Democrats are:

I wasn't quite sure what to expect, because you hear all the chatter... I felt, were very impressive. They're very committed. They’re very passionate. When you take the time to really sit and talk and listen to them, you know, shouldn't you sort of get the lay of the land and see how it works around here first? That's not how they are operating. They're very committed to making change for the constituents that elected them.

Transcripts of the questions from the two segments can be found below. Click “expand” to read more. 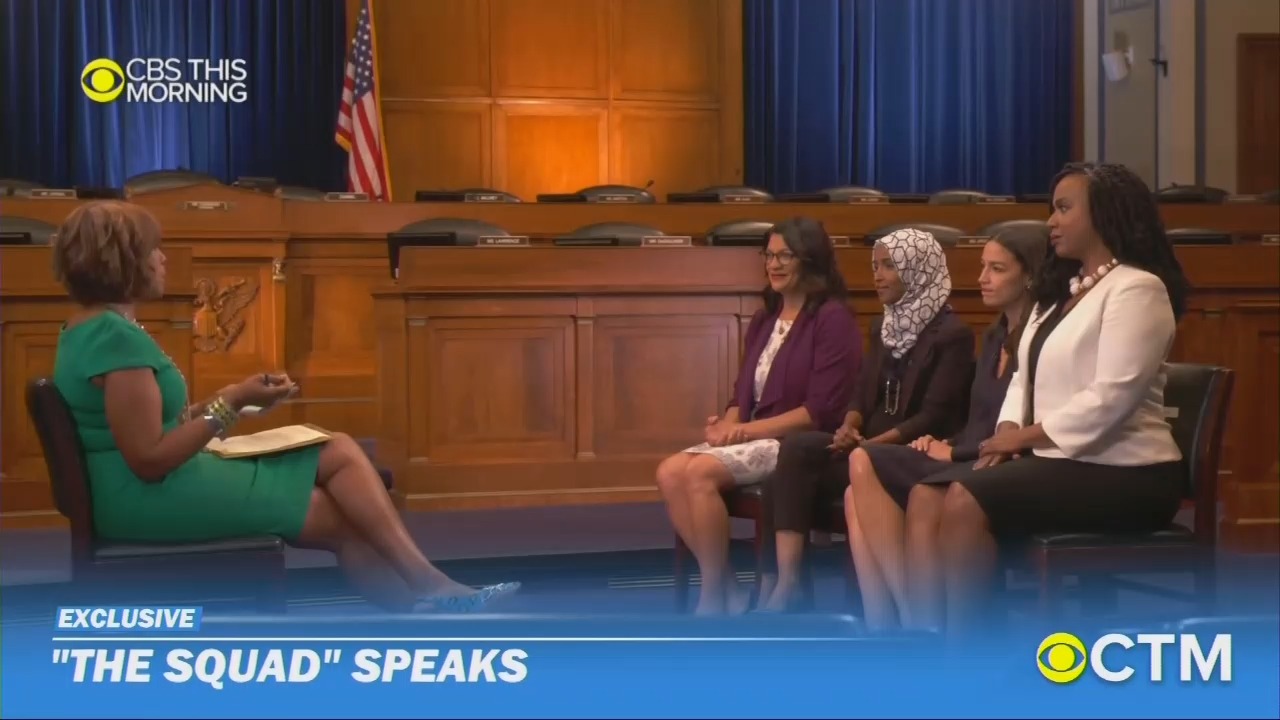 GAYLE KING: Good morning to you and welcome to CBS This Morning. A squad exclusive. In their first joint interview the four Democratic Congresswoman targeted by President Trump say his racist tweets are a distraction.

ANTHONY MASON: The four freshman Congresswomen apparently targeted by the President are Rashida Talib, Ilhan Omar, Alexandria Ocasio-Cortez and Ayanna Pressley. Together, they are known as “The Squad.” The representatives sat down with Gayle yesterday on Capitol Hill for their only joint interview. They shared what it’s like to be the target of the most powerful politician in the country.

GAYLE KING: Quoting the President yesterday: You all are people who hate our country with a passion. You hate Jewish people and you love enemies like al Qaeda. You hear those statements coming from the President of the United States to describe you all. And you think what?

KING: But it sounds like you don’t have respect for the Oval Office when you call the President of the United States the occupant.

PRESSLEY: No, because he's only occupying the space. He does not embody the principles, the responsibility, the grace, the integrity of a true president. And so for that reason, I'm not dishonoring the office. He does every day. This is a distraction. This is a disruption on our leading and legislating and governing on the care and concern and consequence of the American people.

KING: What did you think when you heard the tweet?

KING: It's interesting that you all use the word "distraction," that he is trying to distract away from real issues. You know, it's been said about the four of you, you've been a real distraction, you're playing right into the President's hands — you have your critics too — who say that you are a distraction?

REP. ILHAN OMAR: The insinuation of that question itself is a distraction. I think he wants you to focus on that.

KING: I wasn't quite sure what to expect, because you hear all the chatter.  They, I felt, were very impressive. They're very committed. They’re very passionate. When you take the time to really sit and talk and listen to them, you know, shouldn't you sort of get the lay of the land and see how it works around here first? That's not how they are operating. They're very committed to making change for the constituents that elected them.

KING: The President again defended his tweets at a cabinet meeting yesterday and accused the four congresswomen of hating America. When we sat down with the squad yesterday for their only TV interview as a group, we asked if they had any regrets about things they have said in the past. Now, that includes vulgar words from Congresswoman Rashida Tlaib about impeaching president Trump. Do you think that kind of language is helpful and what did you hope would come of that?

REP. RASHIDA TLAB: No. From day one I felt he made impeachable offenses.

KING: But even if you believe that, the fact that you called him —

TLAIB: I didn't do it on the House floor and I'm going to be unapologetic in myself. Seventy percent of of Americans curse. I’m real. This is who I am. I'm rooted in where I come from and it's very common from me and my residents to say things like that.

KING: So, you don’t regret saying that?

TLAIB: Absolutely not. I'm unapologetic. I'll definitely, definitely going to push forward and say we have to impeach him.

KING: We also asked Congresswoman Ilhan Omar about her past comments suggesting some politicians support for Israel is motivated by money. Lawmakers on both sides of the aisle denounced those comments as anti-Semitic.

OMAR: Often times there are things that you might not hold weight for you, but to someone else, right?  The I way they hear and consume information is very different than how the next person might.

KING: So you don't regret your words either?

OMAR: I do not, but I have gotten the —  I'm grateful for the opportunity to really learn how my words made people feel and have taken every single opportunity I've gotten the make sure that people understood that I apologize for it.

KING: Would you like to make it clear you're not anti-Semitic?

OMAR: And yes, nothing I said, at least to me, was meant for that purpose.

KING: The squad of freshmen is very progressive and their views have not always aligned with leadership or colleagues. AOC, I've heard people say, “You're new here.” Shouldn't you wait to get the lay of the land to understand how Washington works?

REP. ALEXANDRIA OCASIO-CORTEZ: think one of things that's funny —  I'm not laughing at you. I'm laughing at the sentiment.

KING: You've heard that sentiment. I'm not the first person who's said that.

OCASIO-CORTEZ: Oh, no. Absolutely not. Not just me but the entire freshmen class I would argue were sent here because Americans are sick of how Washington works, so why would I learn a broken play book where lobbyists have taken over this place?

OMAR: I don't feel a fracture.

OCASIO-CORTEZ; I don't. I don't. I feel that just as there were members of Congress that did not vote for the Speaker on the House floor the day of our swearing-in, just as there are members who challenge her conclusions, who disagree with her, so do we from time to time. But that does not mean that there's a fundamental fracture or a dehumanizing going on within our caucus.

KING: When President Trump first tweeted about the women, Speaker Pelosi was quick to jump to their defense on Twitter despite public disagreements over the emergency border aid package. Ocasio-Cortez rebuked Pelosi for singling out the women for their vote against the bill. You know, when you say things like the Speaker of the House is disrespectful to women of color, is she being disrespectful because of your color or she doesn't like your policies or tactics you're taking to make your point?

OCASIO-CORTEZ: I'll clarify. I did not say she was disrespectful to women of color. I found some of the comments disrespectful, and that was my personal opinion. And I did feel that singling out on the basis of one vote was creating an opening, but that doesn't mean that we —  that we fundamentally disagree or fundamentally disrespect each other's position and power and ability to be here and that's what makes us united as a caucus.

KING: Are you speaking to Nancy Pelosi?

OCASIO-CORTEZ: Our teams are in communication, our chiefs —

TLAIB: But no. I'm very protective.

KING: With all due respect, she doesn't need protection. I want to know if you are speaking—

TLAIB: She’s the new member, not the Speaker. She has any right to sit down with her at any moment at any time with any of us.

KING: Alexandria, are you interested in having a conversation face to face?

TLAIB: Why wouldn't she sit down with her?

OCASIO-CORTEZ: Yeah, no. And we’ve reached out to that end.

KING: A spokesman for Speaker Pelosi told us they have received the request from Ocasio-Cortez's team for a one-on-one meeting and they're scheduling it.