CBS: When Will Republicans Stand Up to Trump’s ‘Nativism and Racism?’

Another book going after Republicans and conservatives is getting fawning coverage on CBS. This time, it’s American Carnage by Tim Alberta. The author appeared on CBS This Morning, Thursday, and co-host Tony Dokoupil wanted to know when congressional Republicans will finally stand up to the “nativism and racism” coming from the President. The co-hosts also touted Alberta’s deriding Mike Pence as “pitifully subjugated.”

But first, Dokoupil launched into wondering about the policies that “many say” are bigoted: “A lot of people on the Democratic side but also many Republicans are wondering whether there are members of Congress who are at some point are going to challenge the President, not only on his populist ideas, but ideas many say are nativist and racist.”

He added, “In your reporting, did you find any member of Congress who you says, ‘I'm almost there and I’m going to challenge him soon.’” After Alberta suggested that many congressional Republicans don’t really like Trump, Dokoupil followed up on their “cowardness”:

Is that the very definition of cowardness to talk behind closed doors, but not take a stand?

You're especially critical of Vice President Pence, writing that he, quote, “so pitifully subjugated himself that his friends wondering if President Trump had blackmail on him.” Are Republicans not sold on Mike Pence as a successor to Donald Trump?

Of course, journalists rarely try and sow division among Democrats. As Nancy Pelosi fights with the far-left progressives in her caucus, the focus in general is how to get them to stop fighting.

In January of 2018, when author Michael Wolff published his gossipy book on the White House, the networks devoted over two hours to it. 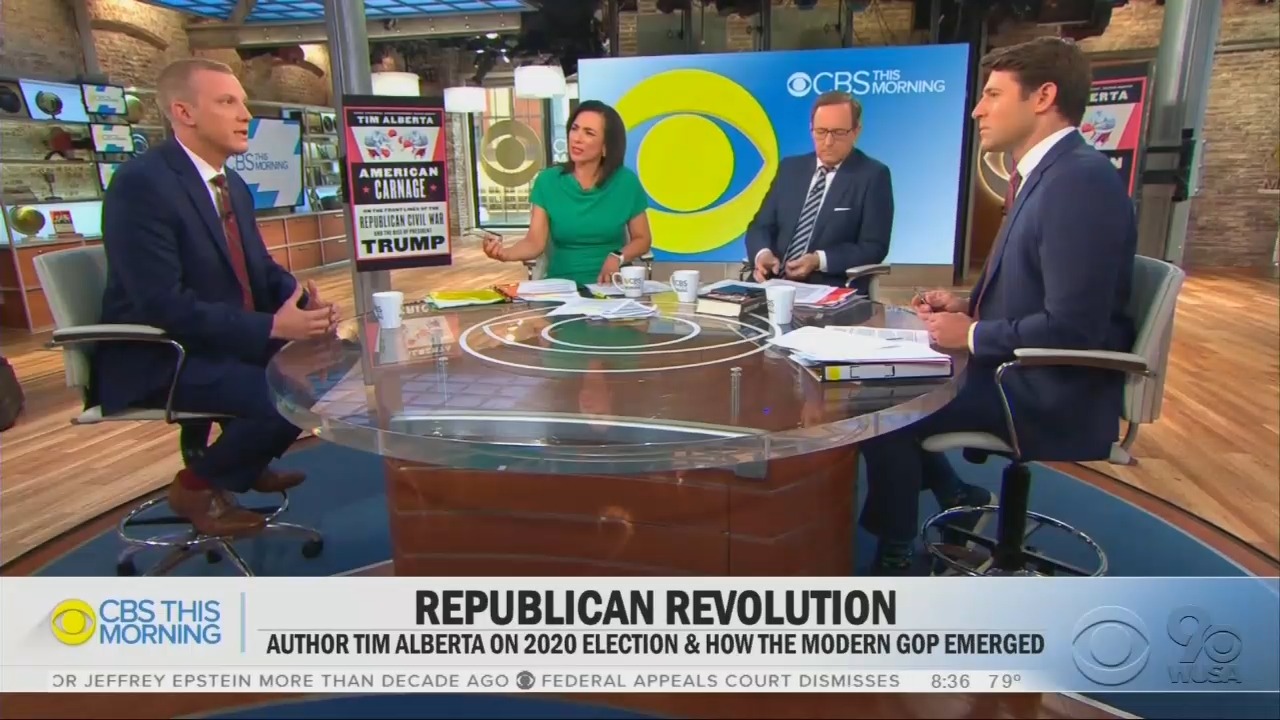 ANTHONY MASON: This morning we have the first look inside a new book that's expected to have both Republicans and Democrats talking. The book is American Carnage: On the Front Lines of the Republican Civil War and the Rise of President Trump. It features more than 300 interviews with top Republican leaders of the past 20 years, including President Trump and it explores how a revolution in the GOP propelled him to the White House. Author Tim Alberta is Politico’s chief correspondent. He’s here first on CBS This Morning. Good morning. Welcome.

TIM ALBERTA: Good morning. Thank you for having me.

MASON: Thank very much for being here. You look at, basically, the current political climate that created this moment and what do you see as being at the root of it?

TIM ALBERTA: Well, look. I think there's a collective instinct for all of us to examine this national landscape and this incredible amount of polarization and disunity in the country right now and lay it all at the doorstep of President Trump and I think that's a mistake. Because what I try to explain in the book is what you've had swirling now for over a decade is these forces of cultural displacement and socioeconomic dislocation and an enormous amount of insecurity and anxiety felt by a lot of Americans of all political persuasions.

MASON: You write, “H is was a canopy of discontent under which the grudging masses could congregate air their grievances about an era of a nation they no longer recognized and a government they know longer trusted.”

ALBERTA: That's right. Man, that's good. That’s pretty good. Look. I think it's important to understand that Donald Trump was able to appeal to, not just a particular section of the traditional Republican electorate. He was in some ways able to expand the Republican Party in reaching new voters, but, of course, in politics, for every action there's an opposite and equal reaction. So while bleeding more of the more college educated, suburbanite Republicans, he was able to still win an election by appealing to a lot of traditional, down-scaled rural and ex-urban Democrats who had never voted for Republicans in many cases.

TONY DOKOUPIL: One of the criticisms of President Trump is not only that he's —  this is —   I've got to go with this question here. A lot of people on the Democratic side but also many Republicans are wondering whether there are members of Congress who are at some point are going to challenge the President, not only on his populist ideas, but ideas many say are nativist and racist. In your reporting, did you find any member of Congress who you says, “I'm almost there and I’m going to challenge him soon.”

ALBERTA: Well, a couple of answers to that question. First to be a member of the modern Republican Party, today’s Republican Party, circa 2019, is to pledge undying allegiance to Donald Trump or else. Right? We've seen that with the likes of Jeff Flake. We’ve seen that with Mark Sanford. We’ve recently seen it with Justin Amash who actually left the party after calling for impeachment of President Trump. So, you're very hard-pressed to find any Republican on Capitol Hill who's going to openly disavow the President or challenge him in any significant way. That said, if you get them behind closed doors and especially if you get a couple of Bud Lights in them, they'll tell you chapter and verse how much they dislike the President, how much they loathe the President.

DOKOUPIL: Is that the very definition of cowardness to talk behind closed doors, but not take a stand?

ALBERTA: Oh, it’s duplicitous. But that is what the book tries to convey, is that what you're seeing on Fox News, or what you’re hearing on local talk radio or what you’re hearing from some of these members at a town hall back at their district is not what they actually feel. But they're sort of locked in this cage of fear as it relates to the President and they understand full well that if political self-preservation is the name of the game, they cannot afford to cross Donald Trump.

MICHELLE MILLER: You're especially critical of Vice President Pence, writing that he, quote, “so pitifully subjugated himself that his friends wondering if President Trump had blackmail on him.” Are Republicans not sold on Mike Pence as a successor to Donald Trump?

ALBERTA: Oh, I think that's an understatement. I think that Mike Pence has wanted to be the president for a very long time. He left Congress, went home and ran for governor of Indiana thinking that would put him on the trajectory toward the White House. He was in real risk of losing his reelection as governor when Donald Trump put him on the presidential ticket. That was sort of a lifeline.

But, look, the Vice President has been unflinchingly loyal to Donald Trump and that's is what President Trump has expected from his Vice President. In so doing Mike Pence has alienated some of his staunchest allies in the Republican Party and I see it very difficult for him to have the seat at the table in the Oval Office that he once hoped to have by virtue of his service under Donald Trump. He's just obviously one example. There are any number of Republicans, prominent, high ranking Republicans, from Paul Ryan, Mitch McConnell on down, people who were once very critical of Donald Trump and Mike Pence was one of them. He was very, very critical of Donald Trump during the campaign privately and a little bit publicly. But when the time came to either pledge allegiance or leave the party, everyone made the same decision.

MILLER: That's strictly because they feel how voters will cast their vote come the next election.

ALBERTA: Absolutely. Look. You have the entire Republican governing class who when they saw Donald Trump's ascent, they had it all wrong. The message, whether it was compassionate or conservatism under George W. Bush, whether it was the notion that free trade was universally beneficial to the American worker, you had a lot of Republicans who essentially took for granted that the Wall Street Journal editorial board was what Republican voters used as their political Bible. And, in fact, a lot of Republican voters and voters writ across the country were in the middle of this sort of populist reckoning, this revolt that was coming. And not many people saw it. Donald Trump saw it very, very early. So when all of these Republicans began to realize how forceful it was. They realized they needed to either get with him or get out of his way.