The Big Three (ABC, CBS, NBC) networks engaged in a feeding frenzy over Michael Wolff’s gossip-filled book, as they ate up the salacious details in Fire and Fury. From January 3 through January 9, the networks stuffed their evening and morning programs with over two hours of coverage of the Wolff book and the subsequent fallout for former Donald Trump aide Stephen Bannon.

But other big news, like the FBI re-opening the investigation into the Clinton Foundation scandal (11 minutes, 10 seconds) and the Dow Jones cracking the 25,000 mark (5 minutes, 46 seconds) were swamped by the Wolff book coverage (2 hours, 20 minutes, 5 seconds). 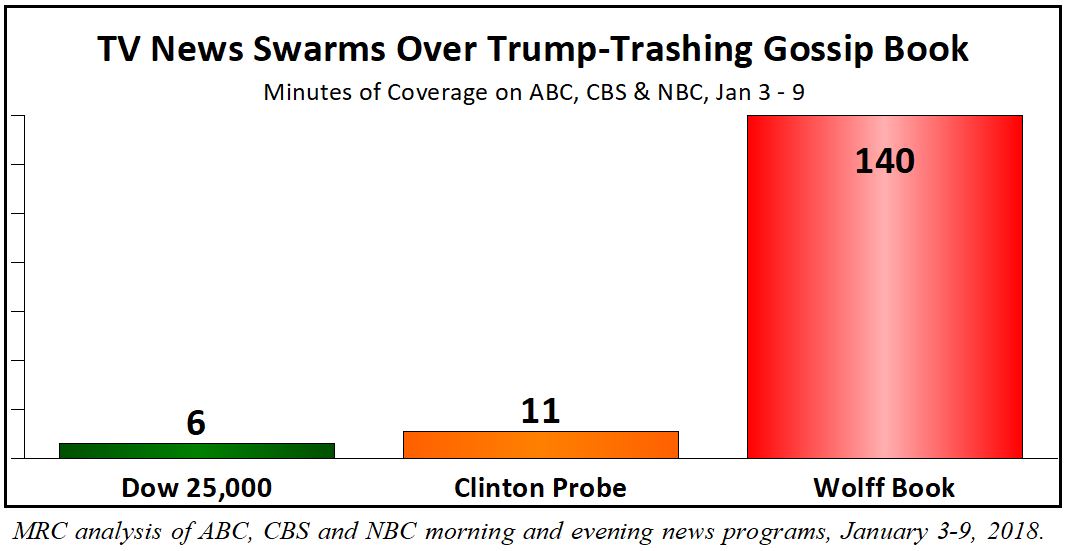 CBS was the most obsessed network, as it jammed its programs with 49 minutes and 40 seconds of coverage of the Wolff book and Bannon news. ABC wasn’t far behind as it spent 46 minutes and 22 seconds on the book and its repercussions for Bannon. NBC devoted 44 minutes and 3 seconds to the Wolff and Bannon topics.

NBC’s January 5 Today show interview with Wolff was typical of the network coverage. Co-host Savannah Guthrie urged the author to regurgitate his takes on Trump’s mental state: “One of the overarching themes is that, according to your reporting, everyone around the President, senior advisers, family members, every single one of them questions his intelligence and fitness for office.” Wolff eagerly doubled down: “Let me put a marker in the sand here. 100 percent of the people around him.”

However, the positive stock market news for the Trump administration garnered a hiccup of coverage on ABC (23 seconds) and brief mentions on NBC (1 minutes, 7 seconds) and CBS (4 minutes, 16 seconds).

Even then, the networks covered the re-opening of the Clinton case in a dismissive way. On the January 6 edition of ABC’s Good Morning America, longtime political analyst Cokie Roberts huffed “There is certainly at least a whiff of politics here.” CBS This Morning, on January 6, brought on New York Times editorial page editor Kathleen Kingsbury to wave the whole thing off as a purely partisan“vendetta” by Trump: “Given the fact that there doesn’t seem to be new evidence on the table, the only conclusion we can come to is that this is a political vendetta brought on by the White House.”

As if the media’s massive coverage of Wolff’s unsubstantiated allegations against Trump didn’t smack of a “political vendetta” against a Republican president.