Socialist Bernie Sanders, who has decried millionaires for years, is a millionaire. That revelation was ignored by the flagship ABC and NBC morning shows, despite a combined four hours of air time on Wednesday. Only CBS This Morning noticed, offering a scant 49 seconds to the awkwardness of the very wealthy Sanders.

CBS guest co-host Anthony Mason explained, “Senator Bernie Sanders said he is a millionaire.  In an interview with the New York Times, the Democratic presidential candidate says his 2016 book Our Revolution pushed him into the ranks of high earners as it entered the New York Times bestseller list.”  Highlighting a perceived hypocrisy, Mason added, “The Vermont senator denounced millionaires for years.”

The only clip of the socialist discussing this point came when Sanders admitted, “I wrote two books in recent years. One of them was a bestseller on the New York Times bestseller list, translated to five or six languages. I did very, very well. I made money on that book.”

There was no push back from political correspondent Ed O'Keefe and no reminder to Sanders of all the times he condemned millionaires. CBS This Morning and Tuesday’s CBS Evening News offered a combined four minutes and 22 seconds to interviewing Sanders, but just 49 seconds of the total interviews mention of his wealth.

Yet, that’s still better than the other two morning shows. ABC’s Good Morning America and NBC’s Today skipped Sanders’s millionaire status entirely. Both Fox News and CNN on Wednesday, however, mentioned it. The New York Times reported it online on Tuesday and in print on Wednesday.

In 2013, the Media Research Center’s Brent Bozell and Tim Graham showcased how journalists tried to portray wealthy 2012 Republican presidential nominee Mitt Romney as out of touch:

When ABC anchor Diane Sawyer interviewed Mitt Romney on April 17, 2012, she casually announced “the Obama campaign is working overtime to paint the portrait of a man whose riches have put him out of touch.” She then offered Romney the Obama spin: “The speaking fees, the Cadillacs, the story out now that there’s an elevator for your cars in the new house you’re planning in La Jolla. Are you too rich to relate?”

And Romney wasn’t even someone who decried millionaires.

Transcripts of the CBS This Morning interviews with Sanders can be found below. Click “expand” to read more.

ANTHONY MASON: Senator Bernie Sanders said he is a millionaire.  In an interview with the New York Times, the Democratic presidential candidate says his 2016 book Our Revolution pushed him into the ranks of high earners as it entered the New York Times bestseller list. The Vermont senator denounced millionaires for years but admitted to Ed O'Keefe the book earned him significant royalties. It's in an interview you will see only on CBS This Morning. 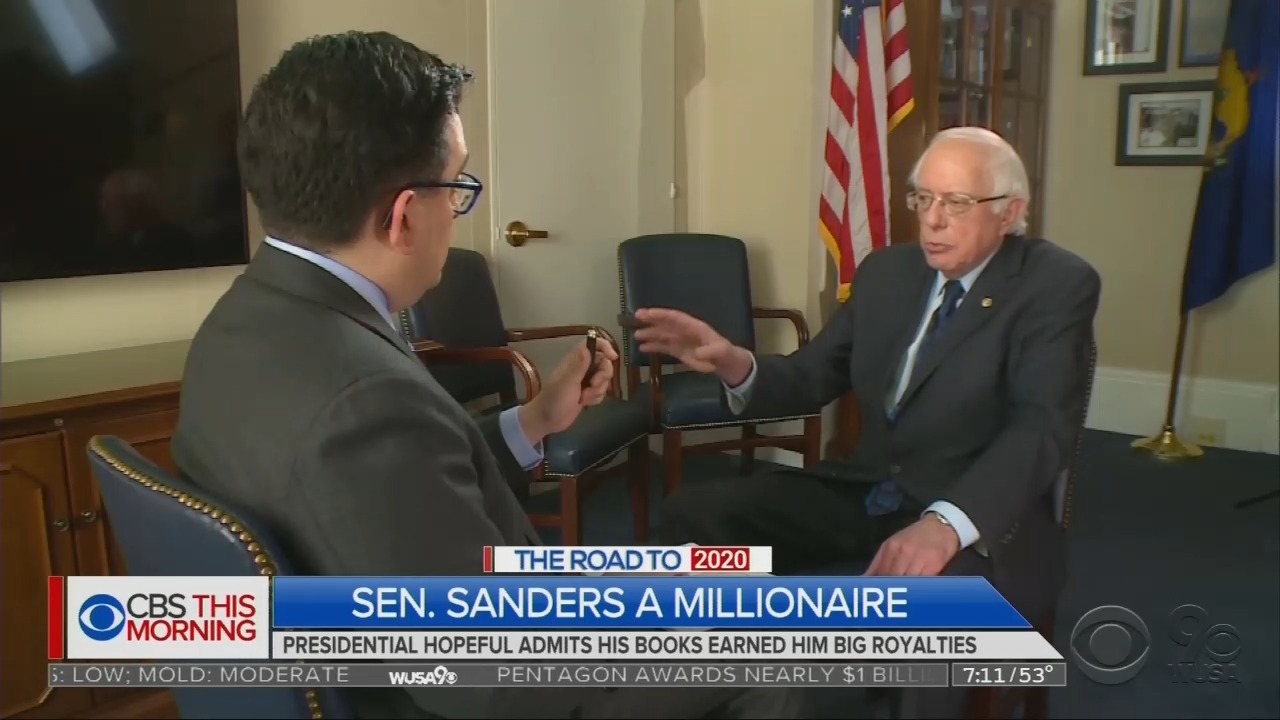 BERNIE SANDERS: I wrote two books in recent years. One of them was a bestseller on the New York Times bestseller list, translated to five or six languages. I did very, very well. I made money on that book.

MASON: The 2020 presidential hopeful also said he would release ten years of tax returns by tax returns. In the past, Sanders faced criticism from political rivals for not releasing all his tax returns.

NORAH O’DONNELL: Senator Bernie Sanders, who lost his last bid for president, is now leading the polls in a packed field of 2020 Democratic candidates. Today, four of his opponents in that race are co-sponsoring his universal health care plan in the Senate. It is called Medicare For All. Ed O'Keefe spoke with a self-declared socialist in an interview you'll see only on CBS This Morning. Good morning.

ED O’KEEFE: Good morning. These days, you're more likely to see Senator Sanders out on a campaign trail rather than here in the halls of Congress. But he’s back today to introduce an updated version of one of his signature proposals. Long considered too radical by many Democrats, it's now central about how the party talks about health care.

SENATOR ELIZABETH WARREN: We have a chance for medicare for all.

O’KEEFE: It's a common refrain on the Democratic presidential campaign.

PETE BUTTIGIEG: I believe in Medicare for all.

SENATOR KAMALA HARRIS: That's why I'm supporting Medicare for all.

SENATOR COREY BOOKER: I support medicare for all.

O’KEEFE: But what is Medicare for all?

SANDERS: It guarantees, like every other major country on earth, health care to every man, woman, and child in this country.

O’KEEFE: Is this proposal socialism?

SANDERS: No, it's not. It's similar to what Canadians have.

O’KEEFE: Under the Sanders plan, all Americans would be covered by a government-backed program like Medicare. All necessary heath care would be covered but at a cost. Some put the price tag at 25 to $32 trillion over the next de decade. This sounds expensive.

O’KEEFE: What if I have a private or employee-based insurance program right now and I like it?

SANDERS: You may be one of the millions who leaves your job this year and you’re going to leave your private insurance. You may be one of the many of the millions of people who find that his employer has gone out and got another insurance company to cover you. You’re going to have to change that. But, essentially, under Medicare for all, all people will be covered by Medicare.

O’KEEFE:  And what happens to those insurance companies after your plan is implemented?

SANDERS: Under Medicare for all, we cover all basic health care needs. So, they’re not going to be there to do that. I suppose if you want to make yourself look a bit more beautiful, or you want to work on your nose or your ears, they can do that.

O’KEEFE: So, basically Blue Cross/Blue Shield would be reduced to something like nose jobs.

O’KEEFE: The Senator’s bold proposal doesn't account for the thousands of people who work for those insurance companies and what would happen to them under that plan. We reached out to Blue Cross Blue Shield for comment, but didn’t hear back. Anthony?