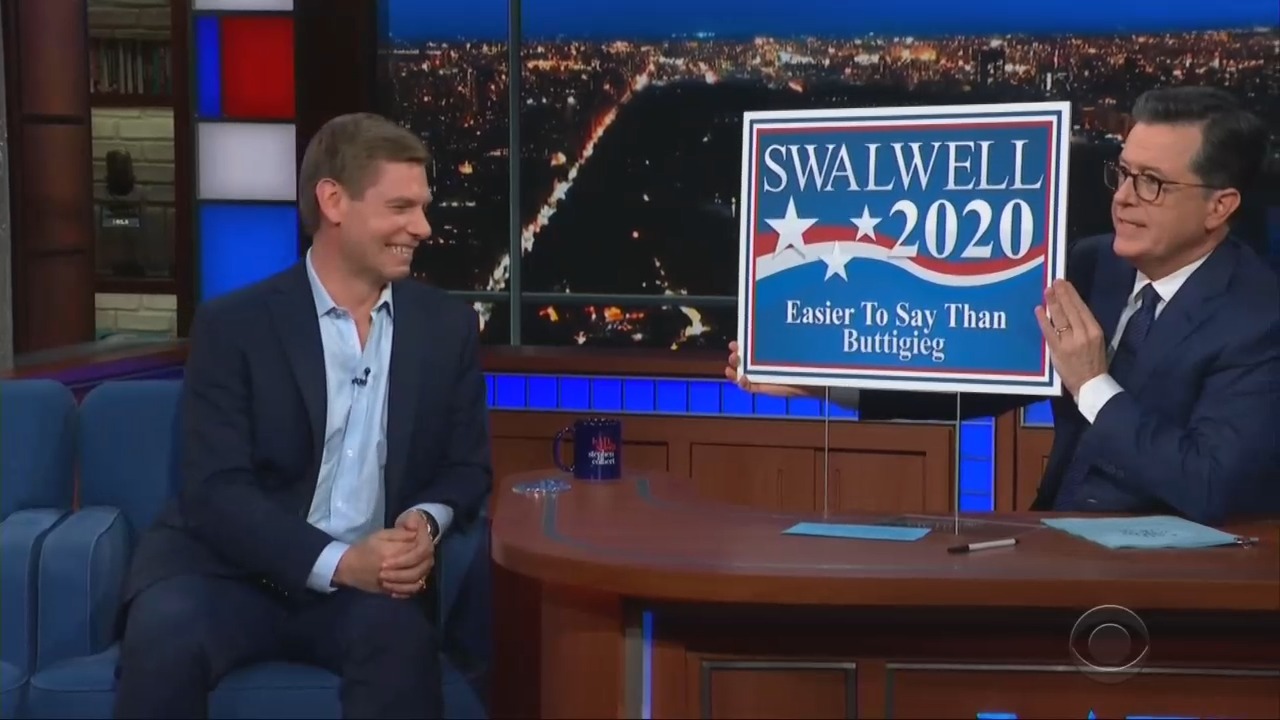 Stephen Colbert is a comedian and not a journalist. But the Late Show host is clearly becoming an arm of 2020 Democrats as another candidate announced on his show, Monday night. Colbert failed to ask Congressman Eric Swalwell a single tough question. Instead, he offered softballs and even repeated the California Democrat’s attack lines against Trump: “You've been very critical of Donald Trump.... You’ve called him a wrecking ball. You called him a Russian agent.”

No mention of the fact that the collusion and obstruction claims, which Democrats pinned their hopes on, have fallen apart. No mention of the conclusion on the Mueller report. Instead, Colbert prompted Swalwell’s 2020 announcement with this set up: “What can you do to try to fix what you see is wrong with this country?”

Colbert teed up the Democrat to push gun control: “You have been very outspoken about Trump and Russia, but you're running on gun reform. You've partnered with Parkland students.” He added, “Congressman, why is gun reform your issue?” My, what a tough question.

On January 15, Colbert held hands with Senator Kirsten Gillibrand and excitedly wondered, “So I'm just curious: Do you have anything you would like to announce?” On January 10, he gushed to 2020 candidate Kamala Harris, “What makes you happy? Where does your hope come from?”

On Monday, Swalwell even joked about being part of the “Colbert primary.” It may be hard to determine a winner in this primary. Colbert loves all the Democrats. (Quick note on Monday's air time for Colbert: Because of the NCAA men's basketball championship, Swalwell didn’t appear on the CBS show until 1:40 AM ET. Not exactly primetime.)

STEPHEN COLBERT: Welcome back, everybody! Ladies and gentlemen, folks, my next guest is a Democratic congressman from northern California who has been spending a lot of time in Iowa. Please welcome to the Late Show, Congressman Eric Swalwell!

COLBERT: You've been very critical of Donald Trump, as you have been in the past. But you’ve called him a wrecking ball. You called him a Russian agent. You're a congressman.

COLBERT: What can you do to try to fix what you see is wrong with this country?

SWALWELL: I've already done a lot, but I can do more. I have been in congress six years. I've defended our country from the intelligence committee while democracy has been on the ropes.

SWALWELL: I'm ready to solve these problems, I'm running for president of the United States.

SWALWELL: Boy, did it feel good to say that.

COLBERT: To honor you announcing on our show, I'm giving you a very coveted "I announced on The Late Show With Stephen Colbert button right there. That’s for you, sir.

COLBERT: You have been very outspoken about Trump and Russia, but you're running on gun reform. You've partnered with Parkland students. you're doing a town hall when?

SWALWELL: Tomorrow we're launching the campaign from parkland at the BBT Center down there. It's going to be a town hall

COLBERT: Congressman, why is gun reform your issue?