The CBS This Morning crew on Tuesday and Wednesday again expressed irritation about having to cover men accused of doing questionable things to a woman. This time it wasn’t their colleague Charlie Rose, but Democrat Joe Biden. Co-host Gayle King said she had seen a lot of “eye rolls” at the claims of unwanted touching by Biden. She weirdly added that the allegations “make my teeth hurt.”

On Tuesday King, a Democratic donor, reacted to the growing issues over Biden’s touching this way: “I think you have to look at the intention behind it. I think that’s why this is so hard for a lot of people. I have seen a lot of eye rolls... about both of these incidents.”

On Wednesday, King talked to New York Times writer Jodi Kantor and related the dental problem that the Biden complaints caused: “But the whole conversation, I have to say, Jodi, makes me uncomfortable and actually makes my teeth hurt. Have we gotten to the point that we can’t have any physical contact with someone that we are trying to be friendly with, that we are trying to be sympathetic with?”

She lectured, “The fact that someone kisses you on the back of the head or rubs you on the back, shouldn’t intention and motivation matter?” Of course, if the person who is having their head kissed is a child, their opinions should probably be considered, too. 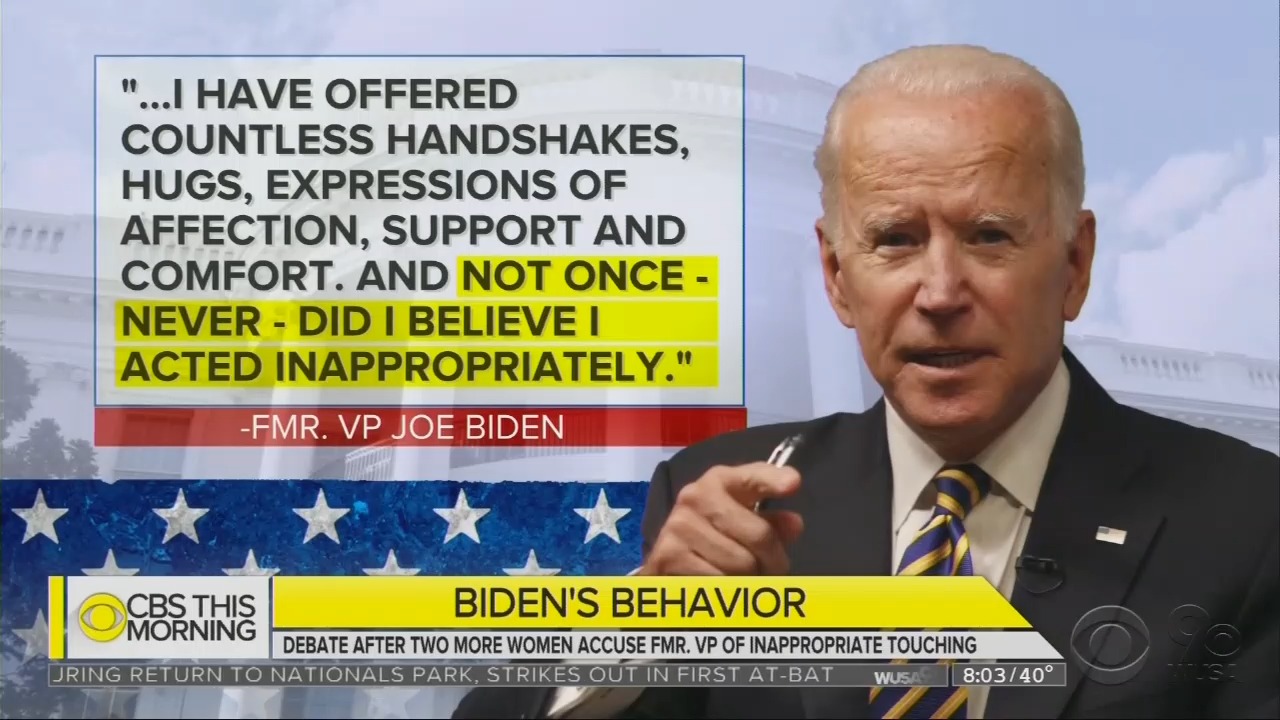 On Wednesday co-host Norah O’Donnell contrasted Biden’s clumsy touching to Harvey Weinstein and wondered, “Has the reckoning gone too far?” She followed up by offering another dismissal of the Biden claims: “Do these allegations, though, minimize the more serious cases of assault and abuse?”

On May 3, 2018, King expressed annoyance about having to cover the sexual abuse allegations against former CBS This Morning co-host Charlie Rose. She scolded, “I don't know what to say about this.... I don't know what more we can do to Charlie Rose except a public flogging. He's gone.... I’m sick of handling it.” 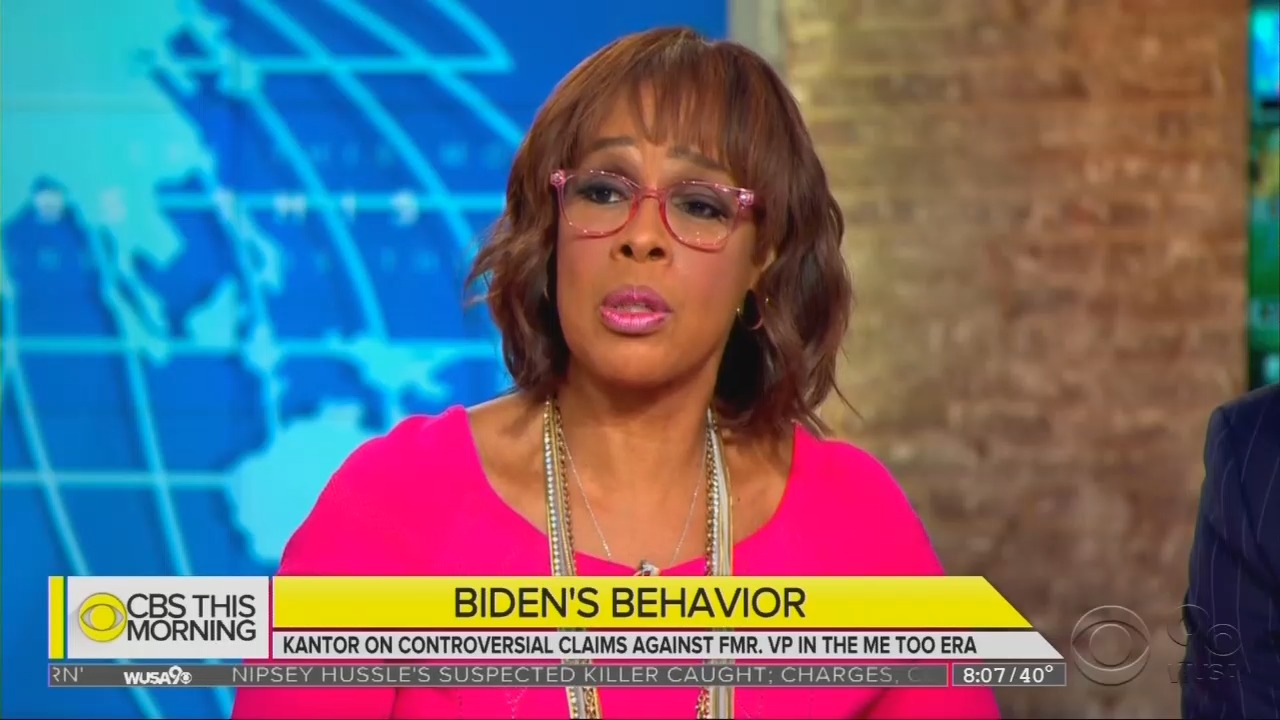 Speaking of the man who allegedly exposed himself to multiple women, grabbed them, and made sexual comments, King still called him a friend: “When the story first broke, I said Charlie was my friend. I still consider him a friend. I know that's probably not the politically correct thing to say at this moment. But I don't believe in abandoning people when they're down.”

In the fall of 2018, when former CBS CEO Les Moonves was forced out because of claims of sexual abuse, O’Donnell lamented how hard the situation was – for her: “...The most powerful media executive in America has resigned in the wake of this Me Too movement and he's my boss  — or he was my boss.” She added, “Les has always treated me fairly and with respect.”

The allegations against Biden obviously aren’t as serious as those against other prominent men have been. But let’s pretend the former Vice President was a Republican. Would CBS’s hosts be as understanding?

NORAH O’DONNELL: It’s interesting to hear the former Vice President say that these women’s stories should be told. They should be told in context. Certainly, the severity of which they allege these things.  Human contact happens on the political campaign trail and also in life, it happens.

NORAH O’DONNELL: Right. There are very serious issues of sexual harassment, abuse and assault. We have covered them on this show repeatedly.

KING: And will continue to do so.

O’DONNELL: CBS News contributor Jodi Kantor is one of the investigative journalists who won numerous awards and who broke the story on Hollywood mogul Harvey Weinstein fueling the rise of the Me Too movement. Jodi, good morning. We should point out Harvey Weinstein is currently faces charges, accused of rape and other dastardly crimes. Has the reckoning gone too far?

JODI KANTOR: The tape that was played is great because it shows how outsized this has become about Joe Biden. And think that’s because of three things. This is drawing on three very unresolved issues. In the wake of Me Too, what are the day-to-day rules for psychical engagement. Even when you talk about not just sexual predation but sort of more regular contact. Number two, when someone makes a misstep, how do you address it? What's the form of accountability or form of correction? Probably the most interesting word to me that has come out of the Biden conversation is the word disqualifying. People have suggested this is disqualifying for the presidency. I think that's a very controversial idea. Three, who should the Democratic nominee be for 2020, also a very unsettled issue. All three of these questions are converging in this debate.

O’DONNELL: Do these allegations, though, minimize the more serious cases of assault and abuse?

KANTOR: We just have to draw a distinction. A lot of these moments occurred in public, they occurred at events in font of other people. It's a totally different scenario than someone like Harvey Weinstein who is accused of drawing women into secluded places so he could take advantage of them.

DICKERSON: You've seen where these conversations take place when they're done well and handled intelligently and where they are not. Is there a worse venue to have these kinds of sensitive conversations than a presidential campaign?

KANTOR: But politics is always the hardest venue. It's the most important venue because these jobs are the definition of power, but the hardest. Clinton, Clarence Thomas, Bret Kavanaugh, Donald Trump, every time we have debates over these men's conduct, they're very important, but they also get mixed with everybody's political preferences and ideas about who they want and don't want to have to power.

KANTOR: I think you hear people saying that openly. Some critics of Biden's behavior say this is a sign that you're a dinosaur, you've already served your time in office, I want to see somebody nominated.

O’DONNELL: Does it matter that Joe Biden has been in public life for 30 years? That he was the architect of the Violence Against Women Act? Does it matter that dozens of women who worked with him in the Obama administration for years in close settings said, “He never touched me or made me feel uncomfortable, none of this was sexual in any way?”

KING: Susan Rice today even speaking about it.

KANTOR: I’d say his record on true policy issues matters a great deal and is not getting enough attention. Pro and con. People talk about his contribution to criminal justice issues you're raising and also they are very critical of his conduct in the Anita Hill case. There are pros and cons of his record to be debated.

KING: But the whole conversation, I have to say, Jodi, makes me uncomfortable and actually makes my teeth hurt. Have we gotten to the point that we can’t have any physical contact with someone that we are trying to be friendly with, that we are trying to be sympathetic with? That we are empathizing with? The fact that someone kisses you on the back of the head or rubs  you on the back, shouldn’t intention and motivation matter? And to your point, it was all done publicly.

KANTOR: We're living through a period of social change on these issues which can feel very confusing.

KANTOR: No less an authority than Gloria Steinem had some advice in today’s paper. She said, the new rule if you want to hug somebody, especially somebody you don’t know, just ask first.

O’DONNELL: I know a man who was just appointed to CEO of a major bank today who said, “I’m not going to have lunch with women anymore.”

O’DONNELL: But that is the honest conversation that is happening about a backlash where men say, “I'm just not going to do because I'm being accused of stuff that I have nothing — .And so I'm not going to go to lunch with them anymore. Is that helpful?

O’DONNELL: That doesn’t mean that that man is right. But that is true and that is happening.

KANTOR: I think what we don't have a sense of is how widespread that is and how it's really hurting women.

O’DONNELL: We're not talking to enough men because I think that fear is wide enough amongst men.

KANTOR: Right. But is it having real consequences in the workplace Is it a worry or an action? That, I think, is very hard to know.

O’DONNELL: But Joe Biden is being accused of doing it in front of hundreds of people with cameras.

DICKERSON: But we should also remember. Politics is just weird.  People kiss babies that they don't know. It's funny, but politics is a very weird venue. Jodi, I'm going to have to kill it there.