Nets: Biden ‘Fighting Back’ as ‘Standards Have Changed' on His ‘Harmless Behavior’

The networks on Monday framed Joe Biden’s response to charges of unwanted touching by women as “fighting back” now that “standards have changed” on what used to be considered his “harmless behavior.”  ABC, CBS and NBC all covered the accusations from Lucy Flores, but only CBS led with the story.

On This Morning, reporter Ed O’Keefe described Biden’s habit of kissing women and smelling their hair as “harmless” to “some.” He explained, “We're still weeks away from Biden’s anticipated entry into the presidential race and the accusation made over the weekend speaks to a part of his behavior that some find harmless, but that his accuser says deserves more scrutiny.”

Relating to the years of examples, O’Keefe added, “Biden is known for an affectionate campaign style that sometimes raises eyebrows.” Over on NBC’s Today, Andrea Mitchell announced that it’s only in the Me Too era such actions could be seen in a negative light: 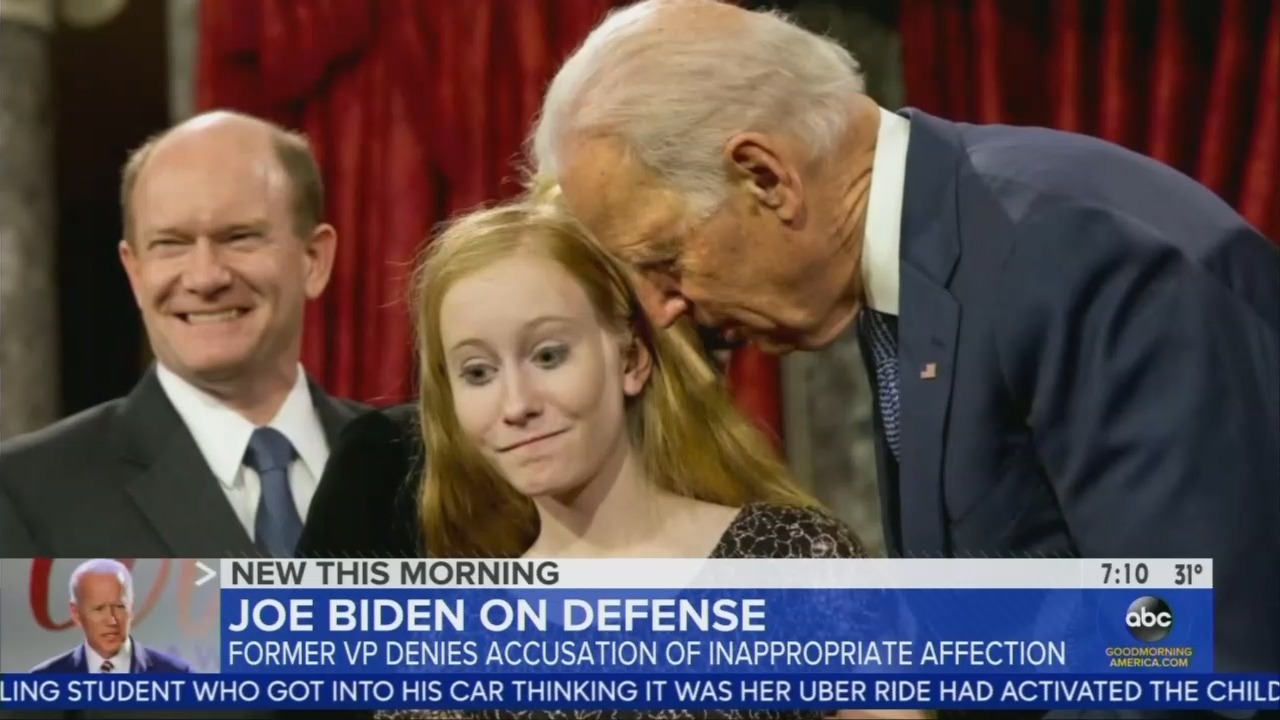 ...As the immediate front runner, he is going to expect a lot of scrutiny, especially as standards for what used to be acceptable interactions have changed for a lot of women, especially in this Me Too era.

On ABC’s Good Morning America, co-host Michael Strahan opened the show by focusing not on the claims but that the former Vice President is “fighting back”:

And fighting back. Former Vice President Joe Biden responds to the accusations of inappropriate affection by the woman who says he kissed her head and invaded her space at a campaign event. Now the women coming to his defense.

All three morning shows deserve credit for covering the Biden controversy. During his introduction, This Morning co-host John Dickerson noted “why the allegation rings true for some of Biden's critics.” But the “standards have changed” benefit of the doubt certainly isn’t given to Republicans.

Transcripts of the segments can be found below. Click "expand" to read more. 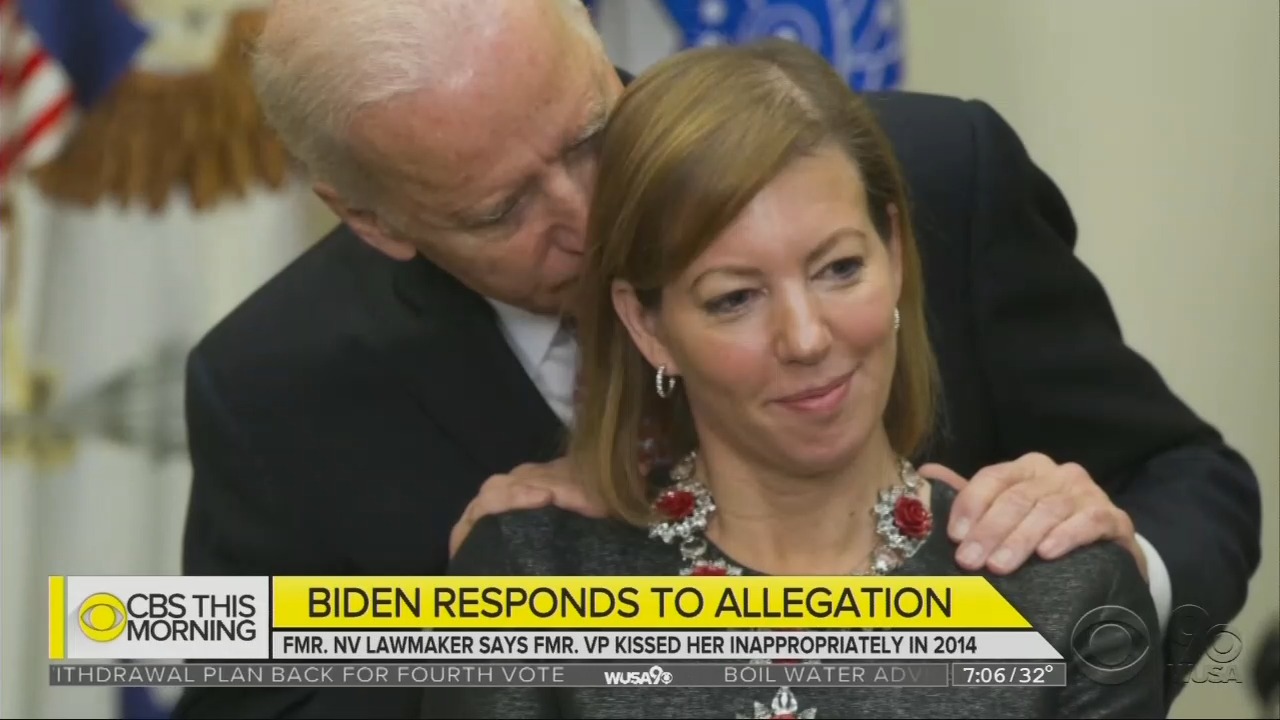 NORAH O’DONNELL: A former Democratic candidate for Lieutenant Governor in Nevada has all but made Joe Biden's all but certain run for president campaign uncertain. Lucy Flores says Biden touched and kissed her in a way that unsettled her during a campaign nearly five years ago now when he was Barack Obama’s vice president.

JOHN DICKERSON: Biden is disputing Flores's story while he prepares to get into the 2020 race. Some of his potential rivals for the Democratic nomination said over the weekend they believe Flores, but it is something voters would have to decide. Ed O'Keefe looks at why the allegation rings true for some of Biden's critics. Ed, good morning.

ED O’KEEFE: Good morning, John. We're still weeks away from Biden’s anticipated entry into the presidential race and the accusation made over the weekend speaks to a part of his behavior that some find harmless but that his accuser says deserves more scrutiny. She tells CBS News she was too nervous to share her story until now.

LUCY FLORES: All of a sudden, I feel hands on my shoulders and Vice President Joe Biden is behind me.

O’KEEFE: Lucy Flores alleges that Joe Biden approached her suddenly from behind at a 2014 campaign event when she was running for Nevada Lieutenant governor.

FLORES: He smelled my hair and then he planted —  he leaned in further and planted this slow kiss on top of my head.

O’KEEFE: Flores originally made the allegation on Friday in an essay published Friday by TheCut.com, writing, “I had never experienced something so blatantly inappropriate and unnerving before.” In a statement, Sunday, Biden said, “In my many years on the campaign trail and public life, I've offered countless handshakes, hugs, expressions of affection, support, and comfort, and not once, never, have did I believe I acted inappropriately. We've arrived at a time that women feel they can and should relate their experience and men should pay attention. And I will.” Biden is known for an affectionate campaign style that sometimes raises eyebrows. Late Sunday, Stephanie carter, wife of former Defense Secretary Ash Carter defended Biden, writing that the moment he leaned in to speak with her at her husband’s 2015 swearing in ceremony with her has been misinterpreted. “The Joe Biden in my picture is a close friend, helping somebody who helping me get through a big day,” Carter says. Flores is a former supporter of Bernie Sanders’s 2016 presidential campaign and she attended a rally for candidate Beto O'Rourke over the weekend. She said she wants voters to consider Biden's behavior.

O’KEEFE: The organizer of the 2014 campaign event in question said he's reviewed more than 700 photographs in that day and the found nothing resembling Flores's accusation. She told CBS News she felt violated and she doesn't believe Biden should run. Some of his 2020 potential opponents said they are aware of the allegations, but didn’t say if it disqualifies him from the race.  Norah? 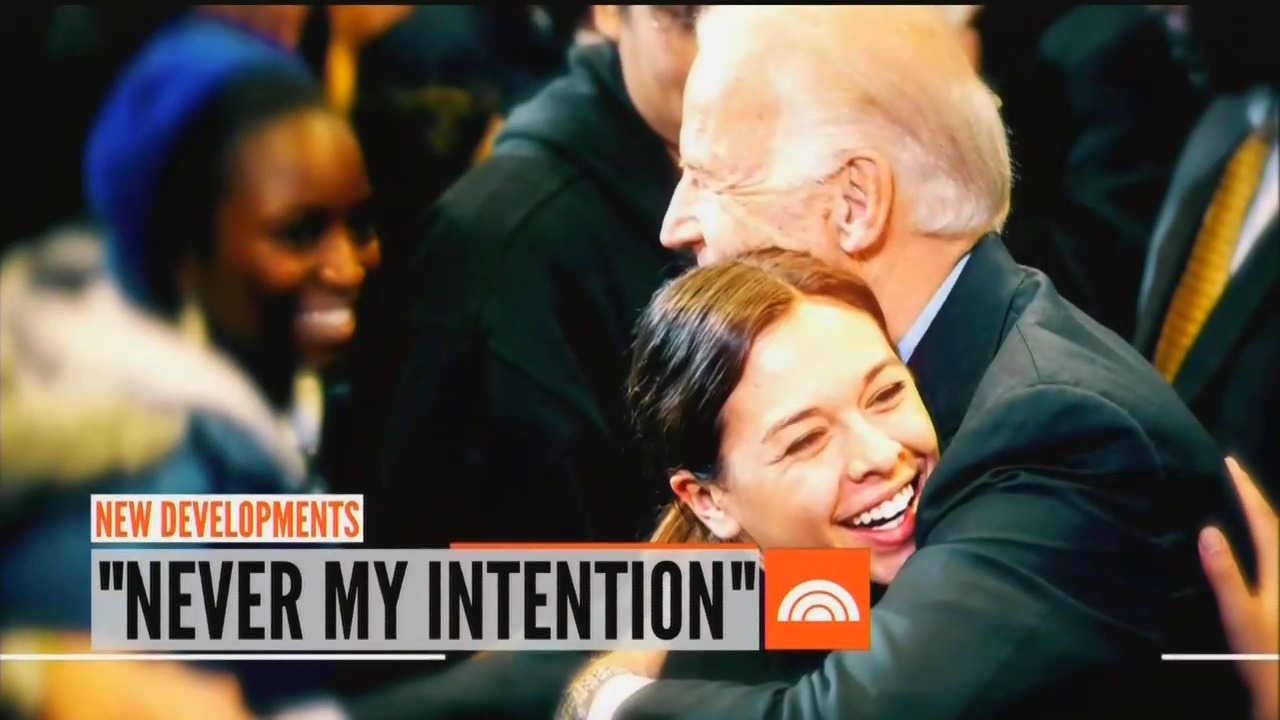 CRAIG MELVIN: Also this morning, former Vice President Joe Biden is addressing for the first time allegations that he inappropriately touched a candidate that he was campaigning for back in 2014. The issue front and center with Biden, said to be close to making a decision about a presidential run. NBC’s Andrea Mitchell has that story. Andrea, good morning.

ANDREA MITCHELL: Good morning, Craig. Joe Biden is perhaps only weeks from announcing his run for president. He is now facing a few allegation that he made a woman he was campaign for in Nevada five years ago feel uncomfortable with what she felt was inappropriate, although, not sexual touching. Whether on a rope line or at a fundraiser, former Vice President Joe Biden, a veteran of countless campaign is an acknowledged hugger. But Lucy Flores, a Nevada Democrat he campaigned for in 2014 says before she introduced him at a rally, he got too familiar, telling NBC news' Kasey Hunt.

LISA FLORES: He leans down, smells my hair and plants this big long kiss on the top of my head. In my brain, I just kept thinking “The Vice President of the United States is smelling me. The vice president of the United States is touching me. He's kissing me and I just don't —  I just don't know what to do.” Flores does not believe it was sexual. But she calls it inappropriate. The incident apparently corroborated by correspondents reviewed by NBC News, Flores says she went public now she feels it is relevant for the 2020 election, but denies it was to help Bernie Sanders who she endorsed in 2016.

Biden issued a statement saying, “In my many years on the campaign trail and in public life, I have offered countless hand sakes, hugs, expressions of affection, support, and comfort, not once did I ever think I was acting inappropriately. If it is suggested I did so, I will listen respectfully. It was never my intention.” Biden also getting support from Stephanie Carter, wife of former Obama Defense Secretary Ash Carter. She writes that this shoulder hug from his 2015 swearing in, that some critics jumped on was simply a show of support between close friends, not inappropriate touching. Biden still undeclared, is out polling the rest of the field. Other 2020 hopefuls were very quick to voice the field for Flores, signaling that if Biden does get in, as expected, as the immediate front runner, he is going to expect a lot of scrutiny, especially as standards for what used to be acceptable interactions have changed for a lot of women, especially in this Me Too era. Craig?

MICHAEL STRAHAN: And fighting back. Former Vice President Joe Biden responds to the accusations of inappropriate affection by the woman who says he kissed her head and invaded her space at a campaign event. Now the women coming to his defense.

GEORGE STEPHANOPOULOS:  The race for the White House now. Former vice president Joe Biden has not yet announced yet. But he's defending himself against an accusation of unwanted
touching. He's getting support overnight from the wife of former Defense Secretary Ash Carter who says a misleading photo of them is being used against him. Senior congressional correspondent Mary Bruce has the story. Good morning, Mary.

MARY BRUCE: Good morning, George. Joe Biden is not officially running for president yet. His record is already facing fresh scrutiny. And now, this morning, Joe Biden says he never thought he acted in appropriately. But that he recognize this is a different time. Saying women should be encouraged to share experiences. And men should be paying attention. This morning, Joe Biden is on defense. Responding to allegations from Nevada lawmaker Lucy Flores that he inappropriately kissed her on the head at a 2014 campaign rally. The former Vice President saying, “In my many years on the campaign trail and in public life, I have offered countless handshakes, hugs, expressions of affection, support, and comfort. Not once, never, did I believe I acted in appropriately. If it's suggested I did so, I will listen respectfully. But it was never my intention.” But Flores says regardless of Biden’s intention, she felt violated.

LUCY FLORES: For the record, I don't believe it was a bad intention. I'm not in any way suggesting that I felt sexually assaulted or sexually harassed. I felt invaded. I felt that there was a violation of my personal space.

BRUCE: At the time, Flores was running for lieutenant governor. Writing in an op-ed she and Biden were about to go on stage when the Vice President put his hands on her shoulders, smelled her hair, and planted “a big, slow kiss” on the back of her head. Biden's behavior toward women has sparked questions in the past. Like this incident in 2017 when Biden put his hands on incoming Defense Secretary Ash Carter’s wife, whispering in her years during the swearing in ceremony. Overnight, Stephanie Carter writing the Joe Biden in my picture is a close friend, helping someone get through a big day, for which I will always be grateful.” And this morning, we are hearing from some of Biden's would-be 2020 rivals. Elizabeth Warren says she believes Lucy  Flores.  While Amy Klobuchar and Bernie Sanders said they have no reason to doubt this story. They all stopped short of saying that the incident is disqualifying. They say it's up to Biden to make his own decision.