HBO anchor John Oliver may be your standard entertainment liberal, but even he can see the awfulness in the way ex-Today host Matt Lauer treated women. In a segment this week deriding psychics as low rent scam artists, the Last Week Tonight host mocked Lauer as “sophisticated Manhattan sex monster.”

Oliver showed a clip of so-called medium Tyler Henry talking to Lauer on the Today show. In the clip, Henry mentions how the NBC host’s dad liked to fish. Lauer reacted as though this was a revelation, calling it “phenomenal.” Oliver ripped, “Yeah, phenomenal. It's clear that Matt Lauer is touched there, and this time, he didn't even have to pressure a subordinate into doing it.”

Commenting on how Lauer bought into the idea of psychics, the HBO host slammed the man known for having a button under his desk that locked his office door: “What's surprising is, whichever technique Tyler used, Lauer fell for it. And he is smart. He's a sophisticated Manhattan sex monster.”

After playing a clip of Lauer talking about how the alleged revelations from the medium brought him to tears, Oliver offered this zinger: “It is weird to envision a scenario in which something happened at the Today show offices, and then Matt Lauer was the one who went home and cried.” 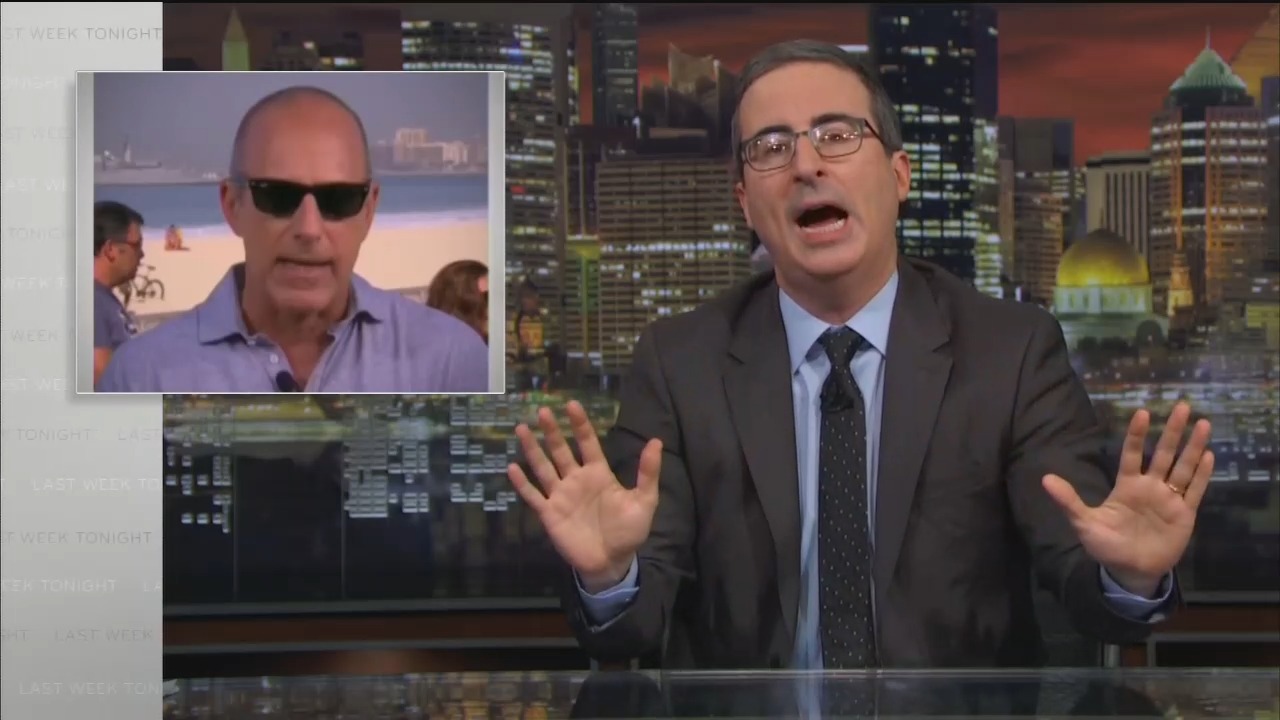 JOHN OLIVER: Cold reading is basically a magic trick, and yet prominent, smart people are willing to co-sign on psychics' abilities. A few years ago, Tyler Henry, the Hollywood Medium and anime drawing of Jared Kushner, went on The Today show to do a reading of one of their anchors. And I'm afraid that it's the exact Today show anchor you are hoping/dreading it is.

TYLER HENRY: There's a reference to fishing, but he's talking about being spoken out loud to. I know what this is, actually. I don't know if you're aware of this, but he's acknowledging an individual would be out on a boat and -- I feel like I'm sitting alone and I'm fishing and I'm thinking "Dad" -- and he's having me acknowledge his feeling of, like, "I'm there with you, I'm there with you."

MATT LAUER: Um, you know, my dad shared two passions with me. He shared golf and fishing.

LAUER: And I do go out and fish a lot alone on a boat.

OLIVER: Yeah, phenomenal. It's clear that Matt Lauer is touched there, and this time, he didn't even have to pressure a subordinate into doing it. And look, look, maybe Tyler Henry just took a shot that an older, straight, white male was upwards-of-lukewarm toward fishing. If he did, that would be cold reading. But he may've been using the other technique here of hot reading, which involves doing prior research on a subject. So, for instance, he could've read articles where Lauer talks about his father's passion for fishing or seen interviews that Lauer gave like this one:

LAUER: My dad taught me how to fish. When I stand in a trout stream now and I've got the waders on and I've got a fly rod in my hand or I am fishing for bass, I think of sitting in a boat with my dad.

OLIVER: Look, maybe Tyler Henry genuinely accessed the afterlife, an action which would fundamentally change our understanding of everything on Earth. Or maybe he just googled "Matt Lauer dad" and hit the fucking jackpot. So to recap: Hot reading? Researching people beforehand, the even lazier skill than cold reading, which basically involves indiscriminately shouting the names of dead irishmen in a hotel ballroom. And what's surprising is, whichever technique Tyler used, Lauer fell for it. And he is smart. He's a sophisticated Manhattan sex monster. But he fell for it, hard, so hard, he wanted to make it clear to the viewers at home that this was way more than just your standard TV bullshit.

LAUER: I tell you, I got home. I cried. I did plenty of crying when I got home.

LAUER: We want to let you know, season 2 of Hollywood Medium with Tyler hen -- it almost seems weird to be doing it as a promo right now because it was so much more important to me than a promo. It premieres Wednesday, August 10th, on our sister network, E.

OLIVER: Wow. Everything about that is a little strange. Not least the fact that it is weird to envision a scenario in which something happened at the Today show offices, and then Matt Lauer was the one who went home and cried.