Now that it’s clear that none of top three Virginia Democrats engulfed in scandal will be resigning voluntarily, CBS and NBC have stepped up the effort to clean up their racial gaffes. During a tour of the governor’s mansion last week, First Lady Pamela Northam handed cotton to an African American child and asked her to “imagine” what it would be like to be a slave. CBS This Morning and NBC’s Today on Thursday covered the latest revelation, but skipped the fact that First Lady Pamela Northam, her husband and the state’s other top leaders are, in fact, all Democrats.

On CBS, co-host Gayle King found the whole thing “sad” and lamented how people are so “hypersensitive” about race these days. Assuring her co-hosts and viewers that Mrs. Northam meant no harm, King lamented, “When I saw the story, it made me kind of sad. I think she's giving a tour, she's trying to put history in context.”

King, a Democratic donor, pleaded, “I don't believe that that was her intention [to be racially insensitive]. I was at the mansion and met them both. She was very lovely. She was talking about the history of the house.”

Indeed, King interviewed Governor Northam on February 11 about the blackface and KKK photo in his medical school yearbook page. She said that Americans must consider — you guessed it — the “context” of the racist photo. King sympathized, “It's a very interesting time for the governor because what I walked away feeling is that he so wants to make this right.” 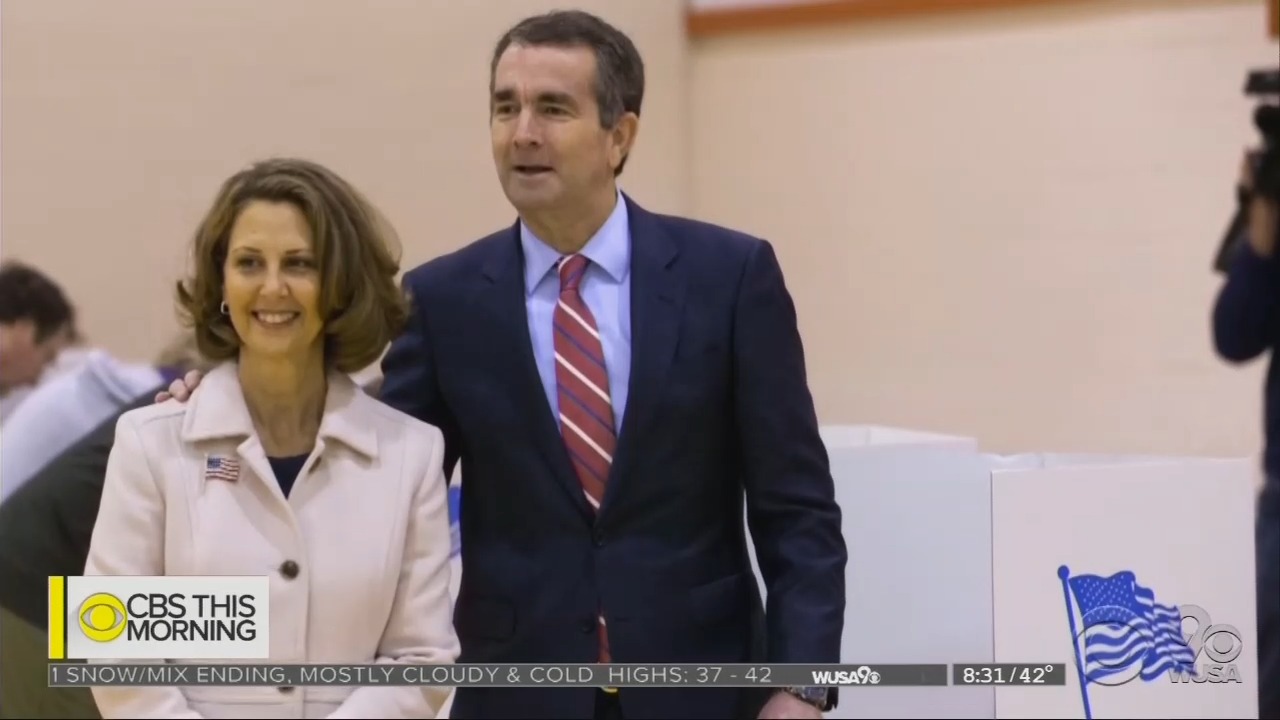 How often do liberal journalists allow “context” for Republican and conservative gaffes?

King on Thursday concluded by reiterating how “sad” she is and to call on people to stop being so racially “sensitive” about everything: “It made me sad. I think we are so quick to jump on things now. Everybody's super and hypersensitive when it comes to racial issues in particular.”

On NBC’s Today, reporter Geoff Bennett explained this new problem facing the Governor’s wife: “A Virginia state employee said during a tour of the governor's mention, Pam Northam gave her daughter and another black student balls of cotton before asking them to imagine being enslaved.”

Yet, like CBS, he never once used the word Democrat. Instead, Bennett explained only that scandal is enveloping “Virginia’s top elected leaders.” What party could they all be in? Hard to say:

Last week, the MRC’s Curtis Houck showcased how network interest in the Democratic scandals simply evaporated when it became clear that these three weren’t resigning.

Transcripts of the segments are below. Click “expand” to read more:

JOHN DICKERSON: CBSNews.com reports Virginia First lady Pamela Northam is being accused of racial insensitivity by a black teenage legislative aide. The teenager says during a tour last week of the executive mansion's former slave quarters, Pamela Northam handed out pieces of cotton to a group of pages. She says Northam asked to imagine being an enslaved person. Northam told us she regrets upsetting anyone.

GAYLE KING: The First Lady says she has given this “same education tour to the executive mansion visitors over the last few months and has used a variety of artifacts and agricultural crops.” She added her intent was “to illustrate a painful period of Virginia history.” Now, this controversy comes after her husband, governor Ralph Northam, came under fire this month when a racist photo on his 1984 medical school yearbook page surfaced. You know, guys, when I saw the story, it made me kind of sad. I think she's giving a tour, she's trying to put history in context. It all depends on how she delivered it. I wasn't there. But if she said, “Can you imagine being this person, or can you imagine a little black child what this was like.”  I don't believe that that was her intention. I was at the mansion and met them both. She was very lovely. She was talking about the history of the house.

NORAH O’DONNELL: I almost called you last night when I saw the story, too. I do think it's important, and I applaud the First Lady for actually saying, “Look, this is where slaves worked here in the governor's mansion in the past.”

KING: And put things in context.

KING: And I think that’s the point. Again, we weren't there, but I can't imagine that she would have been that insensitive to this young person who was there. It made me sad. I think we are so quick to jump on things now. Everybody's super and hypersensitive when it comes to racial issues in particular.

BIANNA GOLODRYGA: It does appear to have been well intentioned.

HODA KOTB: Also this morning, the first lady of Virginia is facing allegations of racial insensitivity just weeks after her husband was caught up in a scandal over a controversial yearbook photo.  NBC's Geoff Bennett has that story. Hey, Geoff. Good morning. 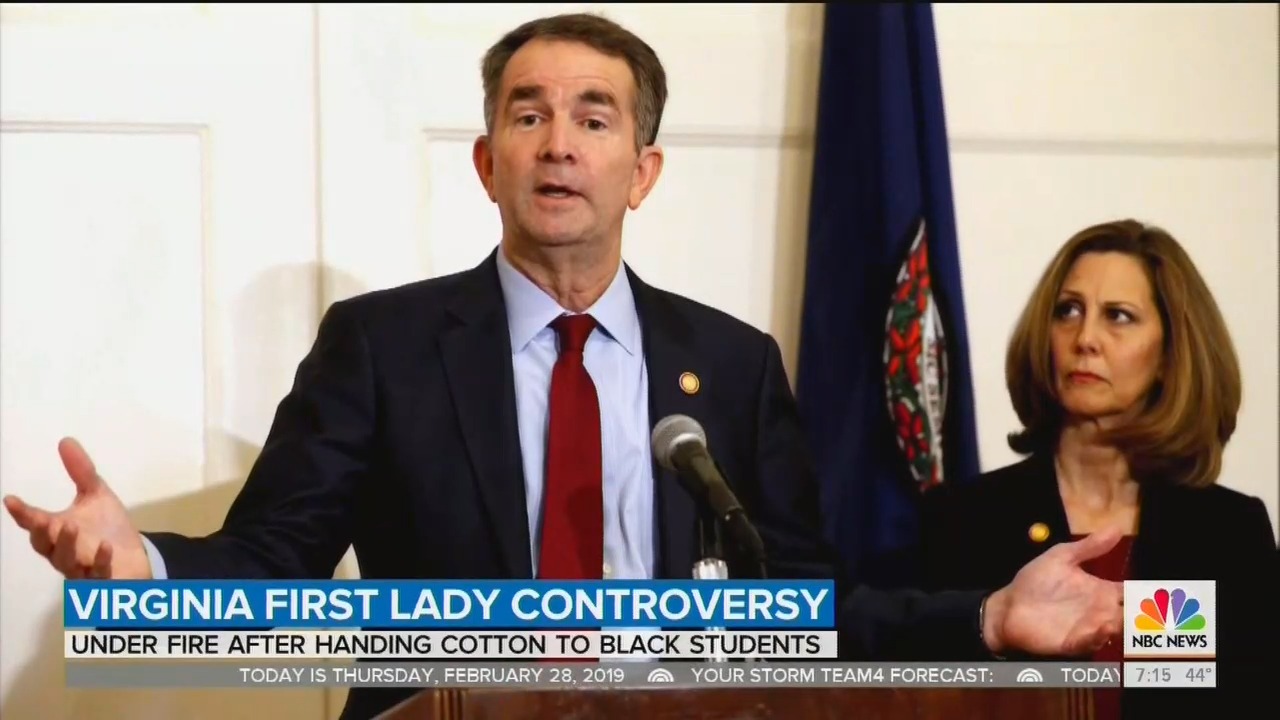 GEOFF BENNETT: Hoda, good morning. The first lady of Virginia stood by her husband's side earlier this month as he tried to move beyond the controversy over a racist photo in his medical school yearbook. But now she's facing criticism herself this morning for actions construed as racially offensive. A Virginia state employee said during a tour of the governor's mention, Pam Northam gave her daughter and another black student balls of cotton before asking them to imagine being enslaved. This morning, the Virginia’s governor’s mansion facing a  new allegation of racial insensitivity. This time, it's First Lady Pam Northam who is under fire over an incident that allegedly took place during a tour of the executive mansion's old slave quarters. According to a letter obtained by the Richmond Times Dispatch, Leah Walker, a Virginia state employee says Mrs. Northam upset her eighth great daughter. The young girl also detailing the episode in a separate letter saying the First Lady handed cotton to her and another African-American child while asking them to, quote, “Imagine being an enslaved person.”

Walker's daughter described it as “beyond inappropriate, especially considering recent events with the governor.” The letters were first reported by The Washington Post. Mrs. Northam telling NBC News, “I provided the same educational tours to executive mansion visitors over the last few months and used artifacts and agricultural drops with the intention of illustrating a painful period of Virginia history. I regret that I have upset anyone.” Walker telling NBC News she's “extremely disappointed and official responses that are as tone deaf and insensitive as the initial bad act.” Al this as Pam Northam’s husband, Governor Ralph Northam continues to ignore calls for his resignation over the racist photo of his med school page. The governor did admit that he once darkened his skin to dress up like Michael Jackson for a dance contest.  it was the first lady who stopped him from showing off his skills during a freewheeling press conference.

REPORTER: Are you still able to moonwalk?

BENNETT: It’s just the latest controversy confronting Virginia’s top elected leaders. The state's attorney general, Mark Herring trying to bounce back from his own black face scandal. Lieutenant Governor Justin Fairfax fighting two allegations of sexual assault. Now, a spokeswoman for Pam Northam deny she singled out black students in that tour. A state senator whose daughter was also on the tour says cotton was handed out to everyone in the group. Now, the governor’s office tells me that Pam Northam has reached out to Leah Walker and her daughter to apologize in person but has not heard back yet. Hoda? Savannah?