Despite the fact that there has been no resolution to any of the scandals surrounding the three Democrats who sit atop Virginia's government, ABC, CBS and NBC have essentially dropped the stories from their flagship newscasts.

From February 1-7,  ABC, CBS, and NBC combined for 116 minutes and 19 seconds and then 96 minutes and 12 seconds from February 8-14 on scandals involving Governor Ralph Northam, Lt. Gov. Justin Fairfax, and A.G. Mark Herring. 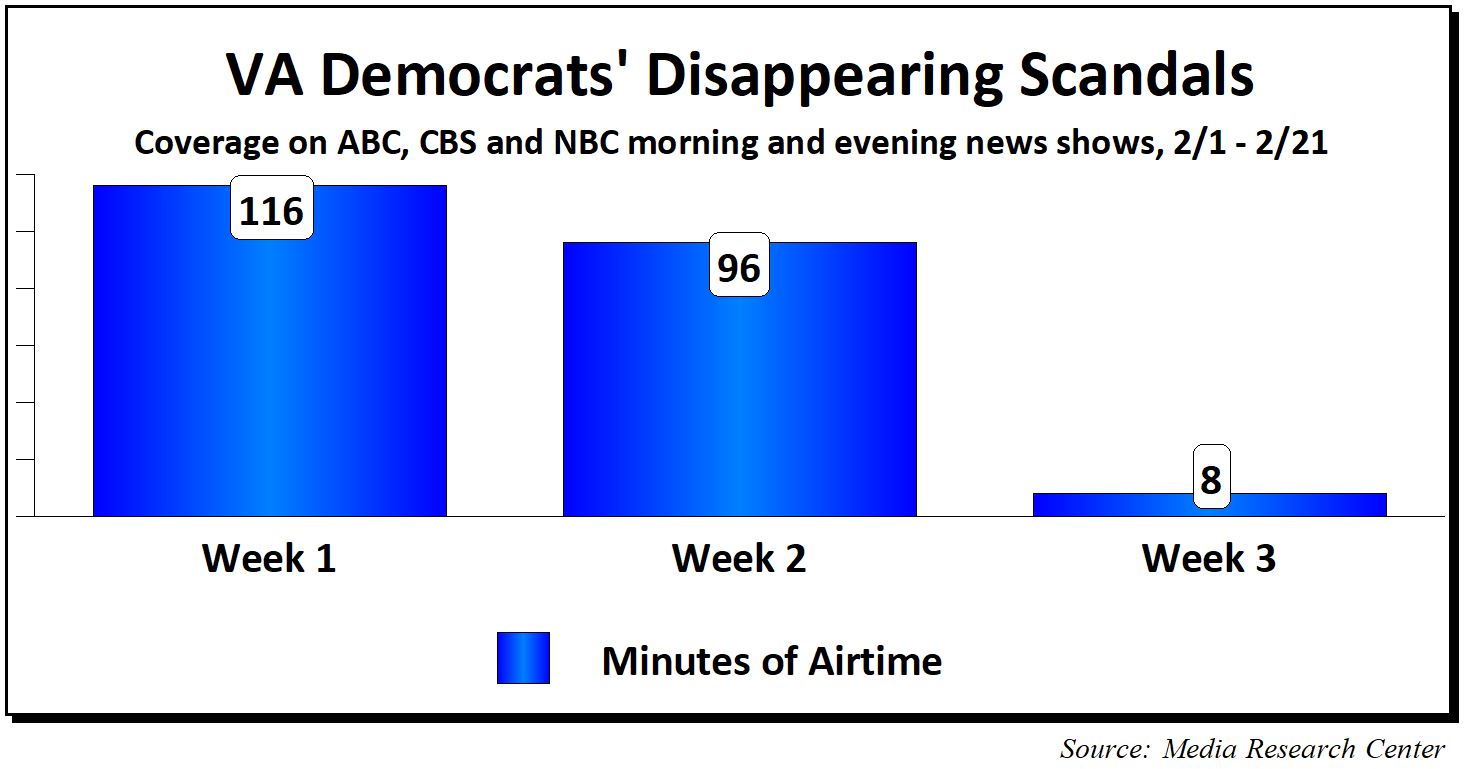 Since then, however, there have only been an additional eight minutes and eight seconds devoted to the Virginia officeholders between two newscasts (the February 15 CBS This Morning and the February 19 Good Morning America).

All told, there’s been 220 minutes of coverage on the Virginia scandals, but again, only eight from February 15 to Thursday evening (excluding teases plus overnight and early-morning newscasts).

The Richmond chaos began unraveling the afternoon of February 1 with the scoop from Big League Politics that there was a racist photo on Virginia Democratic Gov. Ralph Northam’s medical school yearbook page.

A few days after Northam’s disastrous February 2 press conference, allegations of sexual assault arose against Lt. Gov. Justin Fairfax. The uncertainty in the Commonwealth was even further exasperated with the February 6 divulgence by Attorney General Mark Herring that he (like Northam) once wore blackface in the 1980s.

For Northam, he has tried and failed to launch a rehabilitation tour, but still insists he won’t resign. With that in mind, the last time a flagship ABC show covered him was February 11's Good Morning America while the last date for CBS was February 15's CBS This Morning and the February 11 Today on NBC.

In the case of Fairfax, his scandal has maintained a brighter spot in the limelight as threats within the Virginia General Assembly to impeach and investigate him have come, gone, and this week, tried to be resurrected.

For the February 19 print edition of The Washington Post, second accuser Meredith Watson wrote a column insisting that she be given a chance to testify while blasting the “inaction” by the Virginia General Assembly on the claims leveled by Watson and Dr. Vanessa Tyson.

As far as Herring, his blackface scandal rapidly disappeared from the networks as he last came up on the February 9 Good Morning America, CBS This Morning, and NBC Nightly News.

Considering last fall’s Kavanaugh hearings, imagine the media circus that would still be unfolding in Richmond if any of the three statewide elected officeholders were Republicans.