Nasty, Hard-Left John Oliver Show as Churchill: ‘We Haven’t Begun to F**k Ourselves’

Hard-left HBO host John Oliver went on an anti-Brexit rant, Sunday, seething about stupid voters who allowed the country to vote against the European Union. He also featured a profanity-laced tirade from a Winston Churchill impersonator, mocking his home country: “We haven’t begun to f**k ourselves!”

What is the solution provided by the Last Week Tonight host? He insisted, “Well, Theresa may and Parliament could weigh the evidence and decide that Brexit is not worth it. That would be the truly courageous thing to do. They won't do it because of the political backlash they'd get for defying the popular will.”

The nasty Oliver then featured a Churchill impersonator offering the country doom and gloom:

Charming, right? But this is typical of Oliver. In 2018, he slimed NRA TV, calling it something like a “deranged letter from a serial killer.” In the days after the 2016 election, the host panicked, ““How the f**k did we get here and what the f**k do we do now?”

One might point out that, given the chance to really “vote remain,” Oliver decided to “leave.” He’s now an American citizen. The solid liberal even used a tax loophole on his $9.5 million Manhattan penthouse. 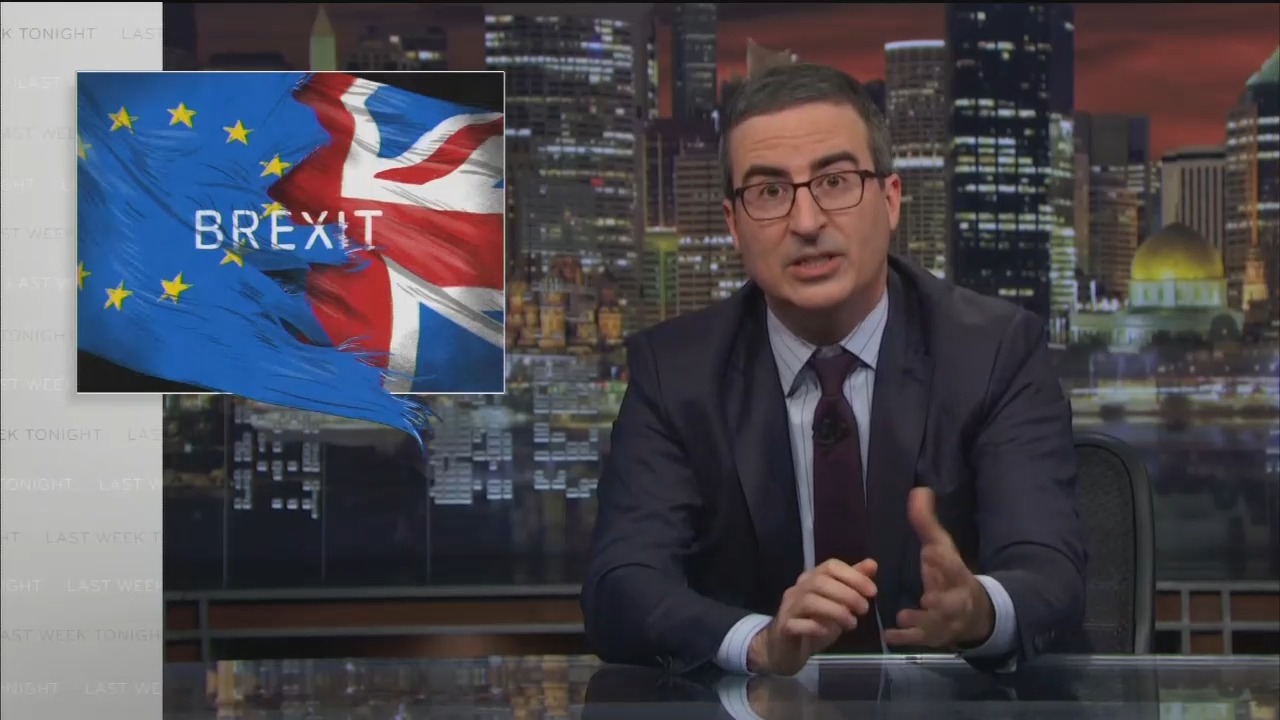 JOHN OLIVER: Look, a true act of political courage at this point wouldn't be to call for a second referendum — something that Theresa May's already said she won't do. It would be to acknowledge that the first one was fatally flawed and that carrying it out will do long-term damage to the country and then canceling Brexit altogether. But it seems that there is no way that's going to happen. Instead, Britain seems determined to step firmly down upon the rake of history and suffer the consequences. And I wish I could offer you a rousing, Churchillian speech now about how everything's going to be okay, but under the circumstances, honestly, the best I can offer you is this.

“WINSTON CHURCHILL”: People of Britain, throughout history, we've faced our share of dark hours. The great war. The blitz. And that time when Deborah accidentally used Howard's custard in her own trifle... And through all this, our stiff upper lip has prevailed, because this country is not for turning, not when other countries have tried to destroy us and not when we are in the midst of trying to destroy ourselves. And I know some are yelling, “Britain, come back, don't do this! You're pointlessly fucking yourselves!” And to them, we say, “Oh, we have not even begun to fuck ourselves. We shall fuck ourselves at the ports. We shall fuck ourselves at the shops. We shall fuck ourselves in the hospitals and in the fields. We shall never surrender. And when the dust clears, what will remain? Britain. Not the same Britain, certainly. A worse one with a weaker economy. Possibly no fresh fruit and a great deal of confusion over how horses can go on holiday. [Horse neighs] But Britain nonetheless. And once we have delivered this mortal wound to ourselves, we will savor the taste of victory, a victory that tastes like mummified chicken fajitas!