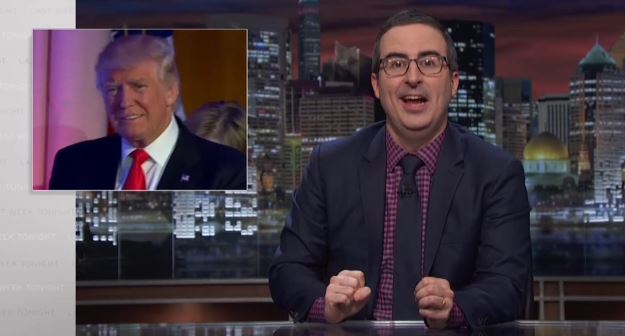 Last Week Tonight’s John Oliver is facing a lawsuit after yet another angry diatribe. This time, the HBO host targeted the coal industry and one its top CEOs. Oliver has a long history of assailing Republicans, conservatives and Christians as “racist,” "evil" “Islamophobes.” The comic has mocked the United States electoral process as a “four-year-old’s birthday” and Donald Trump as “viscerally horrifying.”

On November 15, 2016, the weekend after the presidential election, Oliver freaked out on his HBO show, hyperventilating, “How the fuck did we get here and what the fuck do we do now?” The British host blamed at least some of Hillary Clinton’s loss on America's “deep racism and/or indifference to it.”

Prior to his HBO show, Oliver was a correspondent on The Daily Show. During a 2010 comedy tour, he seethed with rage against the Christian Tim Tebow: “I hate Tim Tebow.”  The comic snarled, “If I was in a room with Tim Tebow and Bin Laden and I had a gun with one bullet in it, I’d shoot bin Laden. I’m not a monster. But if I had two bullets —  I’d shoot Tim Tebow first.”

Here are the worst examples of Oliver’s left-wing hate:

“I dislike Robert Mugabe. I hate Tim Tebow. If I was in a room with Tim Tebow and bin Laden and I had a gun with one bullet in it, I’d shoot Bin Laden. I’m not a monster. But if I had two bullets – I’d shoot Tim Tebow first.”
— Comedian John Oliver during a November 5, 2010 comedy show at Florida State University.

“I always believed he was going to do what he said, which is why I was so against him becoming president.  That doesn’t make it any less viscerally horrifying.”
— Last Week Tonight host John Oliver talking about Donald Trump in a February 8, 2017 interview with USA Today.

“How the fuck did we get here and what the fuck do we do now?... Well, clearly, there are many possible answers to that question, including a misleading forecast that bread complacency, a flawed candidate who failed to appeal to white, rural and working class and— and this is worth repeating — deep racism and/or indifference to it!”
— Last Week Tonight host John Oliver reacting to the election of Donald Trump as President, November 15, 2016.

Conservative Leader Is an 'Evil' 'Islamophobe'

“Don't be deceived by his bland exterior. Where there is banality, there is evil.... But Harper's ugliest tendency is perhaps his pandering to Islamophobes.”
— Last Week Tonight host John Oliver discussing the conservative Stephen Harper, then the Prime Minister of Canada, October 18, 2015.

“No one can say that the American democratic process is not long or, indeed, way too long.... And there’s a lot of balloons involved. American democracy looks like a four-year-old’s birthday party.”
— Last Week Tonight host John Oliver on the October 30, 2015 edition of CBS This Morning.

Speaking of that coal lawsuit, if Oliver has to make any payments, he should be able to afford it. The hypoctrical liberal used a tax loophole on his $9.5 million Manhattan penthouse.