Former New York Times executive editor Jill Abramson has been hit with plagiarism accusations in the wake of her just-released book. Michael Moynihan of Vice on Wednesday tweeted several passages from Merchants of Truth: The Business of News and the Fight for Facts, finding passages that were very similar to previously published articles.

Here’s an example cited by Moynihan: 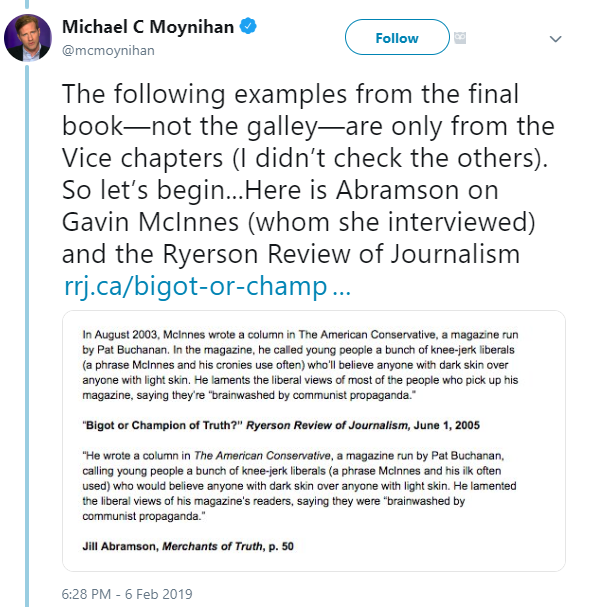 Appearing on The Story With Martha MacCallum on Wednesday, Abramson was confronted with the accusations:

A seemingly flustered Abramson stammered, “All I can tell you is, you know, I certainly didn't plagiarize in my book. There are 70 pages of footnotes showing, you know, where I got the information.”

MacCallum showed a graphic of some of the suspect passages: 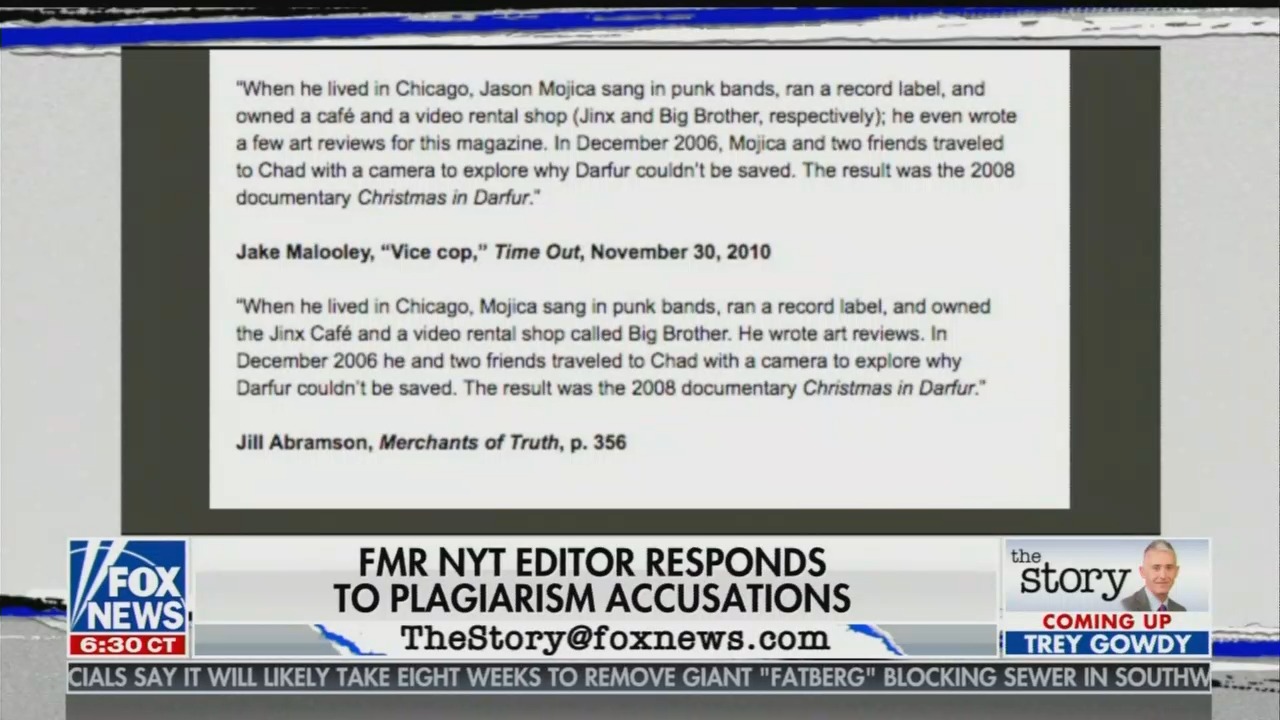 She then pled ignorance: “I haven't looked at it yet.” The Washington Free Beacon has several compare and contrast examples of the passages in question. Late Wednesday night, Abramson responded on Twitter, saying she would investigate herself:

In recent weeks, Abramson has drawn attention for calling out her former paper’s “raw opinion” bias against Donald Trump

A partial transcript of the Fox News interview is below:

The Story With Martha MacCallum
2/6/19 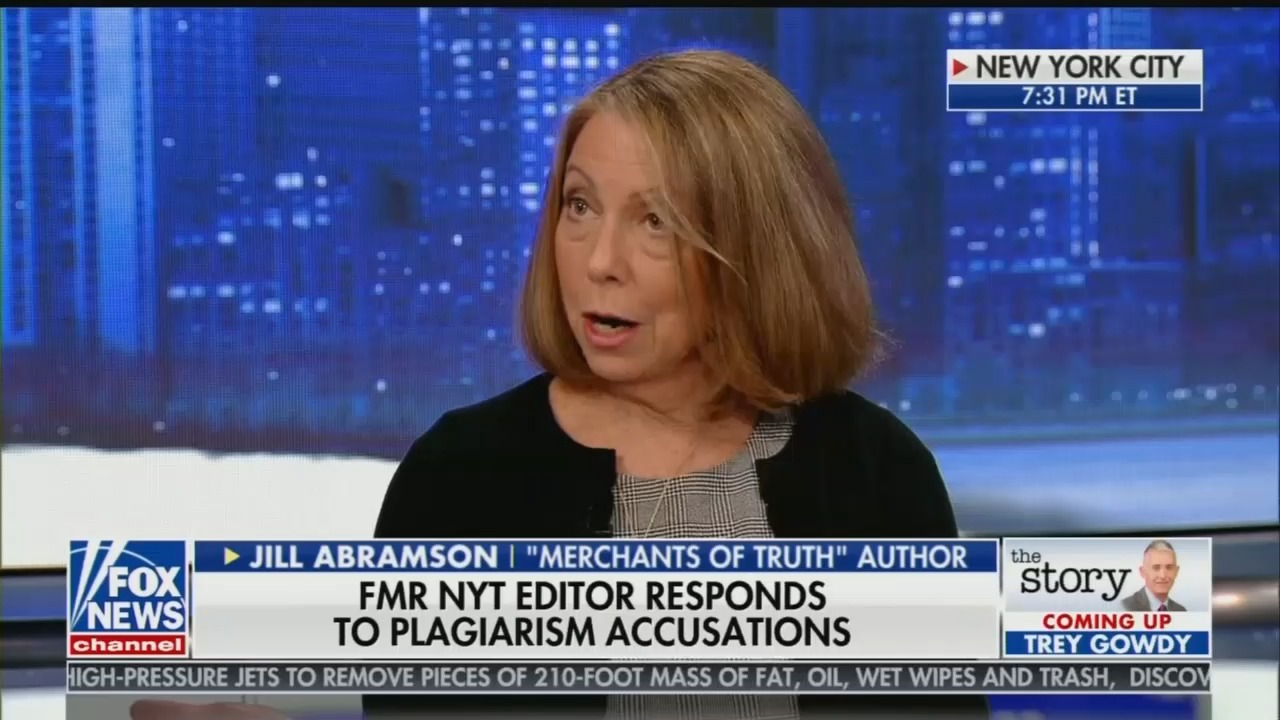 MARTHA MACCALLUM: All right. You are doing a book tour and your book is called Merchants of Truth which we just mentioned in the intro. I want to ask you about this. It's just coming —  just surfacing on Twitter. There are suggestions that some parts of the book could be plagiarized, that they are matched to other writing that is very close in its wording here. Michael Moynahan of Vice is writing about this. He goes to a section that Jake Malooley wrote in Vice Cop that talks about Jason Mojica and the paragraphs are very similar in your writing. Do you have any comment on this? There is another one.

MACCALLUM: Lizzie Widdicombe the bad boy brand? I mean, you are going to be asked to respond to this —

MACCALLUM: -- at some point and I put them right in front of you so you have a chance to look at them.

ABRAMSON: you know, all I can tell you is, you know, I certainly didn't plagiarize in my book. There are 70 pages of footnotes showing, you know, where I got the information and —

MACCALLUM: So do you think it's possible that some of these are just not —  they're incorrectly footnoted perhaps this one Lizzie Widdicombe the bad boy brand the New Yorker talks about Szalwinski told Wired that he doesn't remember reading the article and that his investment was a few hundred thousand dollars. And then the next paragraph from your book is essentially - essentially the same. Do you think this is a footnote issue?

ABRAMSON: No, I don't think it's an issue at all.

MACCALLUM: So, you are standing by your work 100 percent?

MACCALLUM: And I mean, I asked because he has been going on, I guess for the past 20 minutes pulling out --

ABRAMSON: Well, many people from both Vice have been taking issue with the book. It seems, you know.

MACCALLUM: And why is that?

ABRAMSON: I think they don't like the portrayal of Vice. Although I think it's a very balanced portrait and I have a lot of praise for some of their journalists and some of their stories. I like their fresh approach to news.

MACCALLUM: All right. So, you are on the record of saying that there is absolutely nothing in here that --

ABRAMSON: I haven't had —

MACCALLUM: -- you have any problem with and —

ABRAMSON: I haven't looked at it yet.

MACCALLUM: —  you take a look at them.